If you travel a up the Capilano River from its mouth near the Lions Gate Bridge in Vancouver, BC, you’ll come to a long bridge suspended high up over the valley. This is the Capilano Suspension Bridge, one of British Columbia’s oldest and most popular tourist attractions.

In 1887, a Scottish civil engineer and real estate developer named George Grant Mackay sold his assets in the Highlands and left for the young city of Vancouver, Canada. An avid outdoorsman, he quickly became one of Vancouver’s first park commissioners, and was instrumental in the formation of Stanley Park.

In 1888, Mackay purchased 24 square kilometres of old growth forest on both sides of the Capilano River just north of the city and built a cabin at the southern edge of the canyon. The 65-year-old engineer knew that his recreational property on the north shore of the river was prime logging territory. He also knew that, if he was ensure its protection, he would have to establish some sort of presence there. Perhaps taking a cue from John A. Macdonald– who had the CPR built across Canada in the first half of that decade to ward against American occupation- Mackay decided to consolidate the two halves of his property by building a bridge.

In 1889, Mackay hired two local Coast Salish natives, Willie and August Jack Khatsahlano, to help with the construction. August, 12 years old at the time, would grow up become a chief and medicine man of the Squamish First Nation and the namesake of Vancouver’s Kitsilano district. Under Mackay’s direction, the two labourers helped Mackay build the simple suspension bridge from hemp ropes and cedar planks. With a team of horses, they brought the northern end of the bridge across the river. Then they hauled it up the canyon slope on foot and secured it to massive cedar logs, which they had buried on the other side.

In those days, the bridge became known by the natives as the Laughing Bridge cause of the noise it made when the wind blows through the canyon. Today, you can still hear the bridge laugh on a windy day.

In no time, Mackay’s bridge became Vancouver’s first tourist attraction. Adventurous Vancouverites known as ‘Capilano Tramps’ would make the short steamship journey from Vancouver, across the Burrard Inlet, to the North Shore. There, they would head up the rugged Water Works (now Capilano) Road to Mackay’s cabin and the bridge.

Ten years after Mackay’s death in 1903, the bridge was replaced with one made of wire cable. In 1910, a lawyer named Edward Mahon purchased the bridge. The story goes that he fell in love with and married his teenage bride, nine-teen-year-old Lilette Rebbeck. He brought her and her mother over from Vancouver Island. It is said he had bought the bridge for his bride as a wedding present. He built a Tea House on the property in 1911 and imported lavish oriental plants for his bride. His love for her is what made him furnish his land with gardens of beauty that surrounded the Tea House he built for her. Throughout the years, Mahon worked to improve the bridge’s structure.

In 1935, Mahon sold the bridge to his younger step-father-in-law, a Scottish forest ranger named ‘Mac’ MacEachran. MacEachran had married Lilette’s mother Elizabeth in 1921. Upon purchasing the bridge, the Scot invited the local natives to erect totem poles in the surrounding park. These totem poles still stand today. Mac promoted the bridge aggressively, dubbing it the ‘Eighth Wonder of the World’. Due to his efforts, the Capilano Suspension Bridge grew into a thriving tourist attraction, an oasis in the economic desert that was the Great Depression.

Mitchell, a natural entrepreneur, improved upon the Capilano Suspension Bridge and marketed it extensively. In 1956, he rebuilt the bridge completely, strengthening the cables and the anchors. He had trails built on the west side of the bridge, and he converted Mahon’s Tea House into a gift shop. Under Mitchell’s ownership, the Capilano Suspension Bridge rose from a quaint local stop-off to an internationally renowned tourist attraction. By the early ’80’s, the business had quadrupled in size.

In 1983, Mitchell sold the Capilano Suspension Bridge to his daughter, Nancy Stibbard. Stibbard continued her father’s work in developing and marketing the bridge. In 2000, she was inducted into the Canadian Tourism Hall of Fame for her massive contribution to Canadian tourism. Nancy still owns the bridge today.

It has been many years since I visited the Capilano Suspension Bridge.  With 850,000 visitors a year it is one of Vancouver’s most popular attractions.

At the entrance to the Capilano Suspension Bridge Park are a number of stores and restaurants where visitors can shop and eat. At the Trading Post and Gift Store, Mahon’s old Tea House, tourists can purchase various Canadian souvenirs.

The Story Centre, located on the east side of the Capilano River, is a museum where visitors can experience the bridge’s history. Photo-murals, didactic labels, and flip books tell the story the bridge’s various owners, of the Capilano Tramps, and of the early history of Vancouver.

On the west side of the bridge is a series of trails. One of these trail series, called’ Cliffwalk’, is the Capilano Suspension Bridge Park’s newest attraction. Open since July 2011, this trail is really a narrow path cantilevered and suspended on a cliff face high above the Capilano River. On some stretches of the walk, the floor beneath hikers’ feet is made of thick transparent glass, revealing valley floor far below. Scary!

Another trail series on the other side of the bridge is the popular Treetops Adventure. Treetops Adventure is a series of seven suspension bridges connected to Douglas firs. The bridges take hikers from tree to tree, and offer a spectacular view of the surrounding BC rainforest.

The Capilano Suspension Bridge is one of Vancouver’s top ten attractions.

This year is the Bridge’s 114th Anniversary where it brings in tourists from around the world to see the beauty of the canyon and the wonder of the laughing bridge.

Editors Note: Dora Chartier (alias Dangerous) is a writer of some renown and a fellow BRAT. 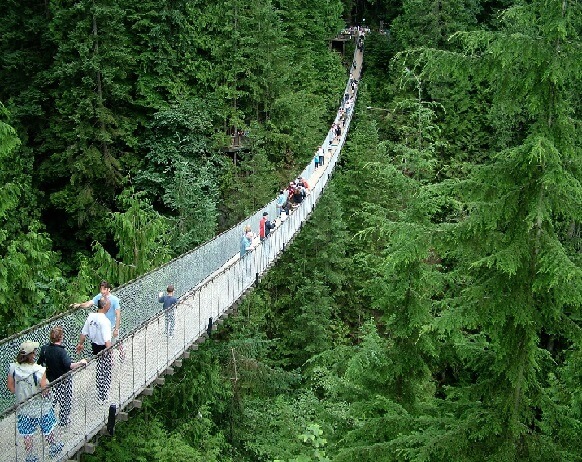