On March 27, 1964, North America suffered its strongest earthquake this century. The result became known as The Great Tsunami of 1964. The epicentre of the quake was located 1300 kilometres north of Prince Rupert, British Columbia, off the coast of Anchorage, Alaska. The quake, which registered 8.5 on the Richter scale, heaved up a section of the ocean floor 15 metres. The energy released by the earthquake was equal to 32 million tonnes of TNT exploding.

The resulting tsunami wave generated by the earthquake travelled across the Gulf of Alaska at speeds of up to 720 kilometres per hour. The tsunami struck the Canadian West Coast near the time of high tide. The highest wave was at Shields Bay on the west coast of Graham Island where the crest was reported to be more than 5 metres above the highest normal tide. Although damage along the coast was widespread, most of it occurred at Port Alberni.

To reach Port Alberni, the tsunami had to travel 40 kilometres up Alberni Inlet. The inlet served to concentrate the energy of the wave. The first wave arrived about 4.5 hours after the earthquake. The wave rose 2.1 metres above the normal tide level, causing some flooding. While the wave receded the water from the harbour also drained, leaving fishing boats on the bottom. Two hours later, the second wave arrived, raising water levels 4 metres above the normal tide level. It was this second wave that caused the damage. 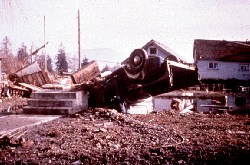 As the waters rose, boats were torn from their moorings and piled logs were picked up and added to the  destructive force of the gigantic wave. Telephone poles were snapped and homes floated 1 kilometre up the Somass River. People reported simply opening the doors and letting the water wash through their homes. Silt was deposited in many of the flooded homes. Cars and boats were strewn about and 69 homes were damaged. Approximately $2.5 to $3 million ($11.4 to $13.6 million in 1998 dollars) in damages were inflicted on homes, businesses, and industries.

In Hot Springs Cove near Pacific Rim National Park, 18 of 20 homes were knocked off their foundations. In Bamfield, on Barkley Sound, basements were flooded.

No one in Canada was killed. However, 11 people in Crescent City, California, were drowned when they went down to the beaches to watch the waves come ashore.