The Vanlene left Japan in 1972 with its holds filled with 300 Dodge Colts. It traveled east towards Washington State without the services of radar and radio direction finders.  They even had a faulty depth finder.  It made its was, unknowingly in to the area of Vancouver Island, some 200 miles off course.  The area is known as the Broken Island chain, a part of Barkley Sound.  Without navigational tools the inevitable happened.  The ship ran aground on one of the hundreds of reefs and summarily sunk.  Quick work allowed salvers to remove many of the cars but not all.  The key loss, however, was the damage caused by 53,000 gallons of bunker fuel oil, which began leaking from the punctured hull and into the surrounding marine environment.  Boats stood by soon after the wreck in preparation for oil spill clean-up, armed with 2,700 feet of log booms, a 600-foot deep sea boom, peat moss, and specialized spill equipment such as “slicklickers.”

Captain Lo, with 13 years of sea-going experience and 4 years as a captain, took the blame for the incident. In spite of the technical problems aboard the Vanlene, “I am still at fault,” he said. It is a sad day when a captain must leave behind his vessel and take responsibility for its loss as he watches it descend below the waves, cargo and all.

Captain Lo Speaks of the Wreck: Captain Lo Chung Hung of the freighter Vanlene has spoken freely since the grounding of his ship March 14, 1972 on Austin Island in Barkley Sound. Lo claims that “all our navigation aids had broken down” and that “I requested of the ship’s owner that it be fixed before we left Japan, but this was the option of the owner.” Registered in Panama, the 8354-ton vessel was shipping cargo from Japan to North America with a crew of 38.

“I am very unhappy.” -Lo: “I am very unhappy about it all,” continued Lo. It seems that the young captain, at 29 years of age, had made his way from Nagoya by heading due east for California with only two magnetic compasses, a gyro compass and four repeaters. A preliminary enquiry into the wreck found that the radar, radio direction finder, deep sea leader, taffrail log and mechanical log were not in working order.

Is the Captain to Blame? Was Lo a Master Captain of great skill and merit for guiding the Vanlene so far with so little guidance, or a shamed man for running aground? Is the captain ultimately to blame for shipwrecks, regardless of the cause? Shipwreck Times meteorological sources say a thick fog reduced vision along Vancouver Island’s west coast at the time the Vanlene neared Barkley Sound. If a deceptive spring fog had not contributed to the navigational confusion, would the Vanlene have gone down, or made safe passage to its port of call?

But land seemed to sneak up on the Vanlene’s lookout. Breakers were sighted on the starboard side! Breakers to port! They had run out of sea room, and the vessel ground to a halt on the rocks, so gently that the chief engineer did not realize they had wrecked until the engines were shut down.

Captain Thought They Were Stranded in Washington State: Half an hour passed before Lo put out the SOS call. He believed their position to be somewhere on the Washington State coast. “The ship’s position was precarious, listing heavily to starboard with the bow on the rocks and the stern awash. The sea was choppy and a storm was blowing up” Lo told journalists. When rescuers finally determined the true location of the wreck, the Vancouver tugboat Neva Straits arrived at the scene, heaving a line to the distressed freighter to evacuate the crew. The Bamfield lifeboat also played a role in the rescue.

Lo explained that the engine room quickly flooded, making the pumping equipment unavailable. “There is nothing you can do when the engine room of a ship floods. Nothing but abandon the ship. I had to give this order for the safety of my crew.”

Our Chief Investigator, Bruce Ricketts dove on the Vanlene in 1979.  It was a wonderful but tragic experience.  At the time, oil was still leaking from the wreck which was causing more than a few environmental problems in the area. 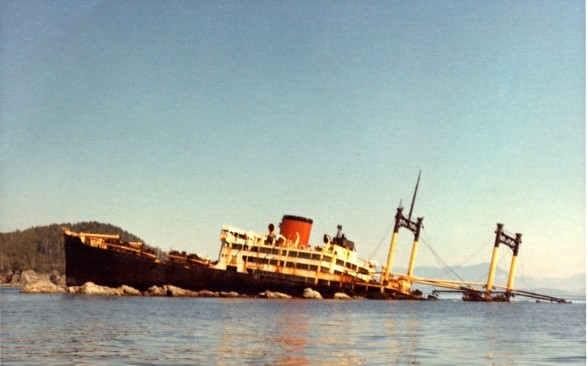