The totem poles of the Northwest Coast tribes were actually family crests and not religious icons, denoting the owner’s legendary descent from an animal such as the bear, raven, wolf, salmon, or killer whale. Coming into a village, a stranger would first look for a house with the totem pole of his own clan animal. Its owner was sure to receive him as a friend and offer him food and shelter. Totem poles “also preserved ancient customs by making sure that in every region within visiting distance of others the old stories were repeated, and the old beliefs about the spirits, the origins of fire and other myths, were basically the same despite linguistic differences between main tribal groups.” —Paul Hamlyn, London

Wakiash was a chief named after the river Wakiash because he was open-minded and flowing with gifts, even as the river flowed with fish. It happened once that the tribe was dancing. Wakiash had never created his own dance, and he was unhappy because all the other chiefs had fine dances. So he thought: “I will go up into the mountains to fast, and perhaps a dance will come to me.”

Wakiash made himself ready and went to the mountains, where he stayed, fasting and bathing, for four days. Early in the morning of the fourth day, he grew so weary that he lay upon his back and fell asleep. Then he felt something on his breast and woke to see a little green frog.

“Lie still,” the frog said, “because you are on the back of a raven who is going to fly you and me around the world. Then you can see what you want and take it. The raven began to beat its wings, and they flew for four days, during which Wakiash saw many things. When they were on their way back, he spotted a house with a beautiful totem pole in front and heard the sound of singing inside the house. Thinking that these were fine things, he wished he could take them home.

The frog, who knew his thoughts, told the raven to stop. As the bird coasted to the ground, the frog advised the chief to hide behind the door of the house.

“Stay there until they begin to dance,” the frog said, “Then leap out into the room.” 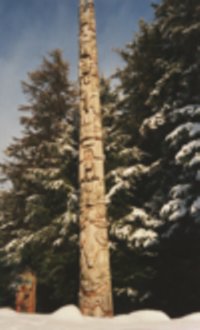 The people tried to begin a dance but could do nothing—neither dance nor sing. One of them said, “Something’s the matter; there is something near us that makes us feel like this.” And the old chief said, “Let one of us who can run faster than the flames of the fire rush around the house and find what it is.” So the little mouse said that she would go, for she could creep anywhere, even into a box, and if anyone were hiding she would find him. The mouse had taken off her mouse-skin clothes and was presently appearing in the form of a woman. Indeed, all the people in the house were animals who looked like human beings they had taken off their animal-skin clothes to dance.

When the mouse ran out, Wakiash caught her and said, “Ha, my friend, I have a gift for you.” And he gave her a piece of mountain goat’s fat. The mouse was so pleased with Wakiash that she began talking to him. “What do you want?” she asked eventually. Wakiash said that he wanted the totem pole, the house, and the dances and songs that belonged to them. The mouse said, “Stay here; wait till I come again.”

Wakiash stayed, and the mouse went in and told the dancers, “I’ve been everywhere to see if there’s a man around, but I couldn’t find anybody.” And the chief, who looked like a man but was really a beaver, said, “Let’s try again to dance.” They tried three times but couldn’t do anything, and each time they sent the mouse to search. But each time the mouse only chatted with Wakiash and returned to report that no one was there. The third time she was sent out, she said to him, “Get ready, and when they begin to dance, leap into the room.”

When the mouse told the animals again that no one was there, they began to dance. Then Wakiash sprang in, and at once they all dropped their heads in shame, because a man had seen them looking like men, because they were really animals.

The dancers stood silent until at last the mouse said: “Let’s not waste time; let’s ask our friend what he wants.”

So they all lifted up their heads, and the chief asked the man what he wanted. Wakiash thought that he would like to have the dance, because he had never had one of his own. Also he thought, he would like to have the house and the totem pole that he had seen outside. Though the man did not speak, the mouse divined his thoughts and told the dancers. And the chief said, “Let our friend sit down. We’ll show him how we dance, and he can pick out whatever dance he wants.”

So they began to dance, and when they had ended, the chief asked Wakiash what kind of dance he would like. The dancers had used all sorts of masks. Most of all Wakiash wanted the Echo mask and the mask of the Little Man who goes about the house talking, talking, and trying to quarrel with others. Wakiash only formed his wishes in his mind; the mouse told them to the chief. So the animals taught Wakiash all their dances, and the chief told him that he might take as many dances and masks as he wished, as well as the house and the totem pole.

The beaver-chief promised Wakiash that these things would all go with him when he returned home, and that he could use them all in one dance. The chief also gave him for his own the name of the totem pole. Kalakuyuwish, meaning sky pole, because the pole was so tall.

So the chief took the house and folded it up like a little bundle. He put it into the headdress of one of the dancers and gave it to Wakiash, saying: “When you reach home, throw down this bundle. The house will become as it was when you first saw it, and then you can begin to give a dance.”

Wakiash went back to the raven, and the raven flew away with him toward the mountain from which they had set out. Before they arrived, Wakiash fell asleep, and when he awoke, the raven and the frog were gone and he was alone.

It was night by the time Wakiash arrived home. He threw down the bundle that was in the headdress, and there was the house with its totem pole! The whale painted on the house was blowing, the animals carved on the totem pole were making their noises, and all the masks inside the house were talking and crying aloud.

At once Wakiash’s people woke up and came out to see what was happening, and Wakiash found that instead of four days, he had been away for four years. They all went into the new house, and Wakiash began to make a dance. He taught the people the songs, and they sang while Wakiash danced. Then the Echo came, and whoever made a noise, the Echo made the same by changing mouthpieces of its mask. When they had finished dancing, the house was gone; it went back to the animals. And all the chiefs were ashamed because Wakiash now had the best dance.

Then Wakiash made a house and masks and a totem pole out of wood, and when the totem pole was finished, the people composed a song for it. The pole was the first the tribe had ever had. The animals had named it Kalakuyuwish, “the people that holds up the sky,” and they said that it made a creaking noise because the sky was so heavy. And Wakiash took for his own the name of the totem pole, Kalakuyuwish. 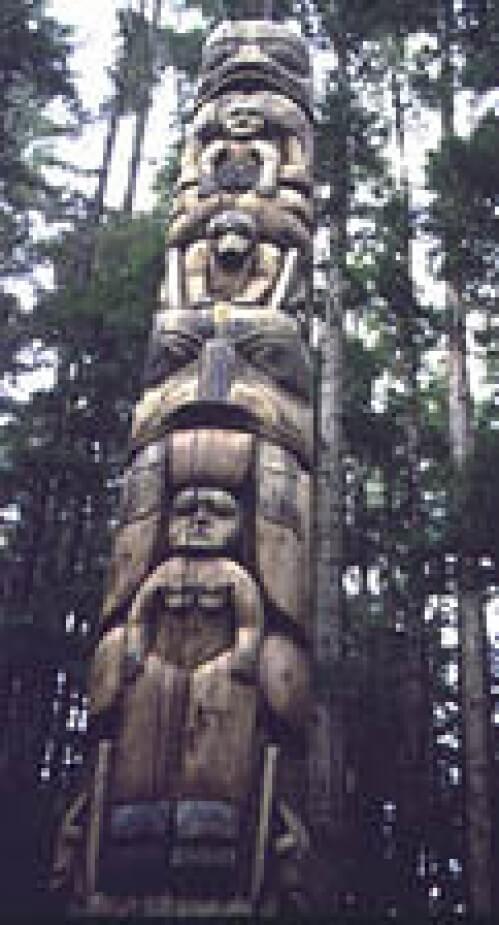