Sir Alexander Mackenzie was born in 1764, in Stornoway on the Isle of Lewis off the West Coast of Scotland. He traveled to New York with his father and went to school in Montreal. In 1779, he entered a company that eventually joined with other Montreal firms involved in the fur trade, forming the North West Company. Mackenzie became a determined young fur trader who ultimately found his way overland across Canada, to the Arctic and Pacific Oceans.

In June 1789, Mackenzie embarked on his first remarkable journey from Fort Chipewyan (on the shore of Lake Athabasca, now NE Alberta). He was accompanied on the canoe expedition by French-Canadian voyageurs and Indian hunters and interpreters. They discovered the De Cho River, now known as the Mackenzie River, and traveled with it to the Arctic Ocean before returning to Fort Chipewyan in September of the same year.

In October 1792, Mackenzie again left Lake Athabasca in search of the elusive Northwest Passage. Traveling along the Peace River, he arrived at his winter quarters in Fort Fork after three weeks of paddling. Mackenzie set out again in May of the following year together with Alexander McKay, French-Canadian voyageurs, Indian hunters and interpreters. Following the Parsnip, McGregor and Fraser Rivers through the Rocky Mountains, they then headed west on foot along 2000 year old trails of the Carrier Aboriginal Nation. After a gruelling journey over the coastal mountains they reached the Pacific Ocean where, on a prominent rock near Bella Coola, Mackenzie wrote:

Returning by the same route, Mackenzie and his expedition arrived back at Fort Fork in August 1793. His dangerous journey would not have been successful without the cooperation of the native people.

Mackenzie wrote a book about his travels that brought him fame and fortune. He became a celebrity in Britain and, in 1802, King George III knighted him for his outstanding Canadian explorations. Mackenzie died in 1820 and was buried in Avoch, near Inverness, Scotland. 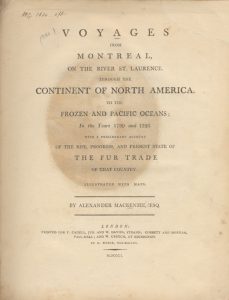 In an interesting twist of history, Mackenzie’s voyages across North America were recognized by Napoleon as the means by which he could embark on a re-conquest of Canada. Napoleon, in an intrigue that had all the makings of a spy thriller, arranged for Mackenzie’s book to be smuggled from England and translated into French. Mackenzie’s description of the Western Canada river system was so precise that Napoleon, languishing in prison, gave orders to Bernadotte, his key Marshall, to lay out a strategic plan to retake New France. Mackenzie, thus became an unwitting accomplice by providing the navigational details to invade Canada by a surprise attack from New Orleans, via the Mississippi River.

Bruce’s notes:  John Donaldson is one very interesting guy.  At the age of 60, armed with a canoe and a sense of adventure, he began a quest that saw him trace the steps and paddle dips of Alexander Mackenzie from Montreal to the Arctic and to the west coast of BC.  He chronicled his adventure in a wonderful book entitled, A Canoe Quest in the Wake of Canada’s “Prince of Explorers”

The web site of Significant Scots (http://www.electricscotland.com) described John as a neurological biochemist with a primary interest in the role of trace metals in the brain. In the industrial milieu, he was formerly a vice-president, scientific affairs and head of molecular biology in the pharmaceutical industry. In the academic area, Donaldson has served as Associate Professor of Pharmacology at the University of Manitoba and as Professeur Agrere at the Universite de Montreal. He holds a BSc in chemistry, an MSc, in microbiology and a PhD in experimental medicine, all gained at McGill University, Montreal. He is a former Garfield Weston scholar in medical research, as well as the recipient of several awards from the American Parkinson’s Research Foundation.

John grew up in Scotland and came to Canada in 1955. Following an active academic and industrial career, he and his wife, Ishbel, now live in Kingston, Ontario, They are proud parents and grandparents, love the great outdoors and have traveled extensively. In addition to canoeing, John is a keen dinghy sailor and light aircraft pilot. He has a great interest in Scottish history, the history of the Canadian fur trade, aviation history and the history of World War II. On the spiritual side, John is a lay oblate of the Benedictine Order and follows Christian meditation. 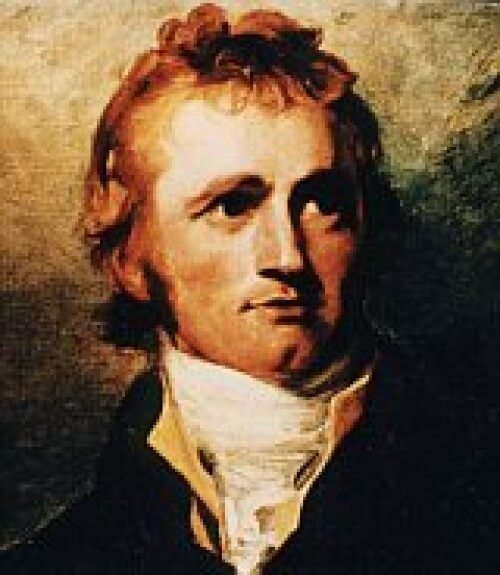 Article Name
Alexander Mackenzie
Description
Sir Alexander Mackenzie was born in 1764, in Stornoway on the Isle of Lewis on West Coast of Scotland. He traveled to New York went to school in Montreal.
Author
John Donaldson
Publisher Name
Mysteries of Canada