On July 11, 1977, Constable David Kirkwood, a twenty-two year old rookie with the Ottawa City Police was involved in a gun battle that resulted in his death. Kirkwood was assisting a plain clothes officer in executing an arrest warrant which turned into a three hour shootout. He was stationed at the rear exit of the suspect’s residence. The suspect shot him in the head from an upstairs window and was killed instantly. Before the situation was over, at least fifty officers were involved and three others were injured.

As a result of the the death of Kirkwood’s, on September 24, 1998, the Government of Canada officially proclaimed the last Sunday of September of every year as Police and Peace Officers’ National Memorial Day.  During the 1984 service in Ottawa, a Memorial book of remembrance for police and correctional officers killed, while on duty, was introduced by the Office of the Solicitor General and the Canadian Association of Chiefs of Police.

The Canadian Police National Pavilion was unveiled in Ottawa On March 22, 1994 by Prime Minister Jean Chrétien at a site behind the Parliament buildings.  The granite stone at the base of the pavilion that displays the names of officers killed while on duty.

Since 1994 the names of Peace Officers of no-police forces, including, Ministry of Natural Resources, Customs and Excise, Fisheries and Oceans, and Conservation, were added to the memorial.  In 1999 new granite blocks were added to provide space for new names for the next 100 years.  Let’s hope that they will never need to be used. 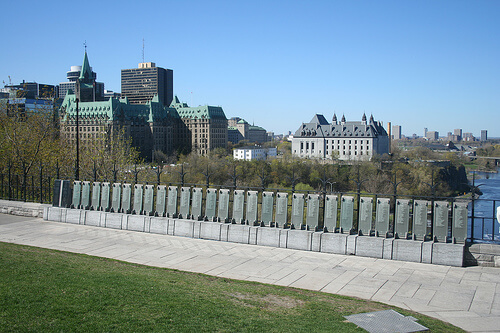