Gerhard Herzberg was born in Hamburg, Germany, on 25 December, 1904 and died in Ottawa on March 3, 1999.  He was married in 1929 to Luise Herzberg (He was widowed in 1971.) and was the father of two children. I was honored to meet Dr. Herzberg in the 1980s at the National Research Council Labs, on Sussex Drive, that bear his name – The Herzberg Institute of Astrophysics.  At that time, he was Canada’s only living Nobel Prize recipient.  He was awarded the 1971 prize for Chemistry.  You never would have guessed it when you met him.  He was not the stodgy person you would have expected.  He was fun to talk with.  When Herzberg retired from NRC in 1994 he was retained as a Distinguished Research Scientist until his death in 1999. 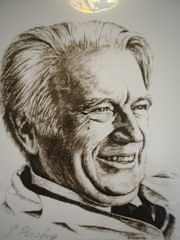 Herzberg received his early training in Hamburg and subsequently studied physics at the Darmstadt Institute of Technology where in 1928 he obtained his Dr.Ing. degree under H. Rau (a pupil of W. Wien). From 1928 to 1930 he carried out post-doctorate work at the University of Göttingen under James Franck and Max Born and the University of Bristol. In 1930 he was appointed Privatdozent (lecturer) and senior assistant in the Physics Department of the Darmstadt Institute of Technology.

In August 1935 Herzberg was forced to leave Germany as a refugee and took up a guest professorship at the University of Saskatchewan (Saskatoon, Canada), for which funds had been made available by the Carnegie Foundation. A few months later he was appointed research professor of physics, a position he held until 1945. From 1945 to 1948 Herzberg was professor of spectroscopy at the Yerkes Observatory of the University of Chicago. He returned to Canada in 1948 and was made Principal Research Officer and shortly afterwards Director of the Division of Physics at the National Research Council. In 1955, after the Division had been divided into one in pure and one in applied physics, Herzberg remained Director of the Division of Pure Physics, a position which he held until 1969 when he was appointed Distinguished Research Scientist in the recombined Division of Physics.

Herzberg’s main contributions are to the field of atomic and molecular spectroscopy. He and his associates have determined the structures of a large number of diatomic and polyatomic molecules, including the structures of many free radicals difficult to determine in any other way (among others, those of free methyl and methylene). Herzberg has also applied these spectroscopic studies to the identification of certain molecules in planetary atmospheres, in comets, and in interstellar space.