Madge Graham was the model for my grandmother.  Poppy, as she was known, was ahead of her time and a die-hard adventurer. In 1919, a women’s place, according to Madge, was in the cockpit of an airplane being a navigator for her husband, Stuart Graham, Canada’s first bush pilot.On her maiden flight a crew of three, Stuart as pilot, Madge as navigator, and Bill Kahre as mechanic, flew a wooden flying boat, the Curtiss HS-2L flying boat, at tree-top level from Dartmouth, Nova Scotia to Grand’Mère, Quebec. The aircraft had only very basic instruments: a compass, an air and wind speed indicator and a turn and bank indicator. The noise from the engine made conversation impossible so Madge rigged up a miniature clothes-line to send messages between herself and the two cockpits.

The 800 mile trip took five days and nine hours to complete with crowds greeting them at every stop.  But not everyone was impressed.  Admiral Byrd (the first man to fly the Pole) declared, “Flying seaplanes over land is suicide and taking a woman along is criminal.”  (An enlightened bugger wasn’t he?) 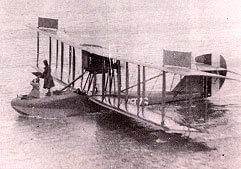 But Madge Graham was not Canada’s only female aviator.  The Canadian Aviation Museum tells us the following:

In 1928 Eileen Vollick became the first Canadian woman to obtain a private pilot’s license. She was just nineteen when she asked a flying instructor: “Can a girl learn to fly?” On her first flight she recalled that she “felt quite at home, fear never entered my head.”

Several women followed Eileen’s example. By 1932 over twenty women from all over Canada had gained their private pilot’s license. This included Louise Jenkins, who bought her own airplane, a Puss Moth, and registered it “CF- PEI” in honor of her adopted province, Prince Edward Island. Not all women had this kind of money. When Gertrude De La Vergne, the first female licensed pilot in Alberta, applied to fly the mail she was told that a women pilot was unsuitable. If women were allowed to fly, they were expected to limit their role to enjoyment. Jobs for Canadian women in aviation were impossible to find in the 1930s.

Many women took day jobs to finance their passion for flight. Oneexception was Amelia Earhart, a famous American pilot. Amelia had celebrity status: girls kept scrapbooks of clippings of her many historic flights. In 1932 she set off from Harbour Grace, Newfoundland, to become the first women to make a solo flight across the Atlantic.

Amelia was the president of the first chapter of the Ninety-Nines, an all women’s pilots’ organization. Several Canadian women tried to join but were disappointed to find that the organization was limited to American pilots. In 1936 a group of Vancouver women pilots founded a female flying club called ” The Flying Seven”. This group delighted crowds with their daring stunts and rallies.

The Flying Seven was active in the late 1930s. When the Second World War was started in 1939 they went to the local Royal Canadian Air Force (RCAF) office to volunteer. But their services were not required. However much women had proved themselves as capable pilots, society still believed that a pilot’s job was “inappropriate” for a woman.

My Grandmother would have been proud of them all.

Article Name
Madge Graham - Canada's First Lady of Flight
Description
Madge Graham was the model for my grandmother. Poppy, as she was known, was ahead of her time and a die-hard adventurer.
Author
Bruce Ricketts
Publisher Name
Mysteries of Canada