Mysteries Of Canada: Volume I

I’m very pleased to announce that my latest book, MysteriesOfCanada: Volume I, is now out and available for purchase on Amazon. 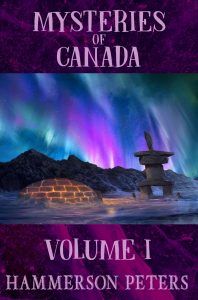 MYSTERIES OF CANADA: VOLUME I

This book is essentially a collection of articles that I submitted to the website MysteriesOfCanada.com in 2018, which I have altered slightly for the sake of fluidity. Most of these stories are of a historical nature and every one of them, with the notable exception of “How Canada Saved the Buffalo”, contains some element of the mysterious, the supernatural, or the unexplained.

I have divided the stories in this book into seven thematic categories:

In Clairvoyance, we’ll look at stories of ‘Second Sight’, in which certain gifted individuals are said to have made accurate predictions based on information that they received through visions and dreams. All of these stories take place in the wilderness or rural areas of Western Canada.

In Ghost Stories, we’ll explore several assorted tales of the supernatural. One of these takes place in Ashcroft, British Columbia, the site of Canada’s only true desert, while the other two are set in Ontario, said to be Canada’s most haunted province.

In Poltergeists, we’ll delve into a number of strange cases from Eastern Canada in which teenage girls found themselves harassed by what seemed to be invisible entities hell-bent on wreaking mischief and mayhem.

In Miscellaneous Mysteries, we’ll look a number of stories which fail to fit into any of the other categories. One of these is the legend of a pirate treasure said to be buried on a river island in Newfoundland. Another, set in an abandoned mining town in Ontario, is a startling tale of UFOs and visitors from a distant planet… with a twist.

In Superstitions, we’ll explore some exotic customs and beliefs held by members of certain Canadian subcultures, including the supposed vampire folklore of the Ontario Kashubs and a long-held First Nations tradition which cautions against whistling at night.

In Haunted Hotels in Ontario, we’ll tour ten Ontario stopping places said to house guests from the Great Beyond, all of which you can stay in tonight… if you dare!

Last, but certainly not least, we’ll delve into stories of forest-dwelling giants and winged monstrosities in the final section of our book, Cryptids.

Where to Find It?

Wishing you great success on your latest achievement.

Thank you very much, Gerry! I really appreciate it.