There is much to write about the War of 1812. Everybody knows something about the War between the US and Britain that took place in Canada and the US.  Most know that Laura Secord did not invent chocolate but rather was a heroine during the war.  Some may even know that the British and Canadians burned Washington and the building now called the White House.  But how many know what started the war and, more importantly, who won it?The best chronology of the War is provided by Robert Henderson in a web site at warof1812.ca.  The chronology is not complete, in fact many very important events were left out, but it is a good starting point. 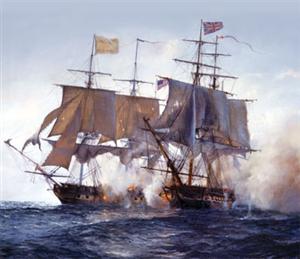 It is clear that the origins of the war were in the late 1700s and early 1800s.  The British navy was quite large but chronically under funded.  This led the British commanders to seize foreign ships looking for deserters and, in many cases, pressing the captured seamen, not just the deserters, into service of the royal fleet.  These foreign ships included American ships.  The Yanks were not amused.

In 1806, the straw that broke the eagles back was the capture of the USS Chesapeake by the HMCS Leopard right off Norfolk, Virginia. The British had  demanded access to the Chesapeake, to look for British deserters, through diplomatic channels and were ignored.  So they took military action.  In a lop sided battle resulting in 3 killed and eighteen wounded, the Leopard’s soldiers boarded the Chesapeake and removed five sailors.  They summarily executed one of the sailors.  But why would this cause a problem?  Surely the British had a right to deal with deserters?  It seems that of the captured seamen only one of them was British born.

You might think that the Yanks would have retaliated in kind for this attack but they did not.  At the time of the attack on the Chesapeake, the British were also involved in skirmishes with the French in Europe.   Napoleon Bonaparte was flexing his muscle through trade embargoes by his allies, primarily Russia and Prussia (Germany), of the British.  The British responded by blockading European ports thus affecting trade between Europe and the United States. The Americans were split on their attitude towards the British. Essentially the northern states wanted to trade with the British and the southern states did not.  President Thomas Jefferson, ever the slippery diplomat, figured that eventually the British would weaken by its blockade in Europe and not wanting to take sides in the dispute passed the 1807 Embargo Act.  The Embargo Act forbade any ship to leave American ports for any foreign destination.  Unfortunately for Jefferson, ship owners in the northern states ignored the law and continued to trade with the British.  (Just as an aside, that is largely what led us to the second flood of Loyalists leaving the U.S. to move to Canada – the first being during the revolutionary war.  These Loyalists were to play an important role in the War of 1812.) The results of the Embargo Act caused so much dissatisfaction in the United States that the Act was repealed by Congress in 1809.

In 1809 a new President took over in the U.S.  James Madison, unlike Jefferson, was not a subtle man.  He believed that the Stars and Stripes should fly over all the lands from the Gulf of Mexico to the North Pole.  And he was determined to show it.