The War of 1812, although it was officially declared in 1812, actually began in 1776.   That was when the Americans declared their independence from Britain.  The war of independence which led up to the declaration split the American colonists along the lines of those who wanted to remain British and those who did not.  This was a wound that was not healed by 1812.

As we discussed in an early part of this series, American thinking had a lot to do with the War of 1812, including:

1.  They had a President who eyed Canada as a northern state for his union.
2.  They had a right-wing faction, the War Hawks, within their Congress who wanted a fight.
3.  They were convinced that the British were an easy target for their military because they were also fighting with France, and thus a quick conquest was assured.
4.  They were concerned that the American Indians were coalescing under the leadership of a Shawnee leader, Tecumseh, and they sought to crush them. 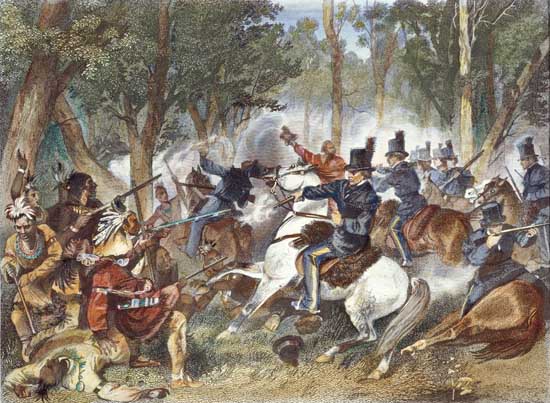 That is not to say that the Americans did not have a beef that drove them to war.  The British, with their acts of Impressments, forced sailors, including Americans, to essentially become slaves in their navy, by attacking American (and other) ships on the open seas.  The British were also blockading European ports thus affecting trade for the Americans; and trade was the life blood of America.

So the politicians bellowed, the cannons boomed, blood was spilled, major settlements and cities were burned and destroyed and precious resources were wasted… to what end?  Who won and who lost?  Did any one win?  Did the outcome have any effect on the fortunes of any party?

Historians are split on who won the war.

Some Americans count the number of battle they won versus those they lost and decide that they won more than they lost – so that they were the winners.

The British on the other hand point to the fact that, with a small army spread across a large land mass, they defeated the Americans.

Canadians, in large number, declare that since the Americans did not conquer Canada, that Canada was victorious.  Many Canadians have the view that there were no winners… the war was fought to a draw.

But where, in all this bravado, are the First Nations peoples of Canada and the Indians of the United States?  They fought in all the battles and were, in my estimation, the tipping point in favor of the British and Canadians, but were they winners or losers?

While I cannot definitively tell you who won the War of 1812, I can suggest that the big losers were the American Indians. The Indians were persecuted by the American government and the commercial interests that represented them.  They were continuously driven across the country and, when defeated, put onto reserves that consisted of some the most inhospitable land in the country.  They were stripped of their lands, their rights, their culture and their traditions.

But let’s not gloat here in Canada.   We really did not do any better for our friends of the First Nations.  Without them we would be singing a different national anthem and what did we thank them with? Empty treaties, the Indian Act, residential schools and on and on.