HomeFirst NationsSEDNA – The Old Woman Who Lives Under the Sea

SEDNA – The Old Woman Who Lives Under the Sea

Most Eskimo of Northern Canada have an Old Woman legend. The Eskimo of the central arctic called her SEDNA.

Two giants co-existed peacefully along side the Eskimo. No one knew where they came from or their names. They had a girl child who had an enormous appetite and little concern for what she ate. One night the giants were awaken to the realization that their daughter was chewing on their limbs. 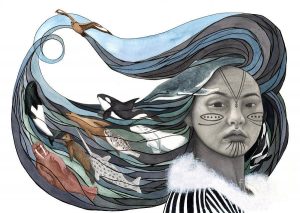 Sedna Inuit Goddess of the Sea – Artwork by Do’an Prajna.

The girl became SEDNA, Mother of the Sea. SEDNA controlled all the elements of the sea. She, when angry, could create storms and other bad conditions. She could tell the seals and whales to move away from hunting grounds.

When confronted by a shaman, SEDNA, at her fancy, promises to provide abundant food to the Eskimo or cuts off the local food supply forcing them to move to another fishing ground.

Editors note: Mysteries of Canada published the legend of the SEDNA in 2001. Since that time we became aware of a slightly different version of the tale. This one suggests that First Nations Peoples are a bit more advanced in their thinking that some of today’s critics of same-sex marriage!

Long ago a great catastrophe caused the world’s supporting pillars to collapse and destroy the earth. Two men emerged full-grown from hummocks of earth. They married each other, and one became heavy with child. The other man sang a magic song, which caused the pregnant man’s penis to divide, he then became a woman and gave birth to a girl child.The mother and father giants cared for the child who grew large and fiercely loved meat. One night she bit into her parents limbs while they slept. They awoke in horror as she tried to bite them again. They took her in a umiak far out into the deepest sea, where they pushed her into the water. She clung to the side of the boat, so they cut off her fingers. The fingers became whales, seals, and shoals of fish. The giant parents were afraid of their child and they rowed away into the night.The giant girl became the demon girl Sedna, the Great Mother of sea creatures. She causes storms and governs the migrations of her sea creature children.

SEDNA – The Old Woman Who Lives Under the Sea was last modified: January 25th, 2019 by Bruce Ricketts
Summary 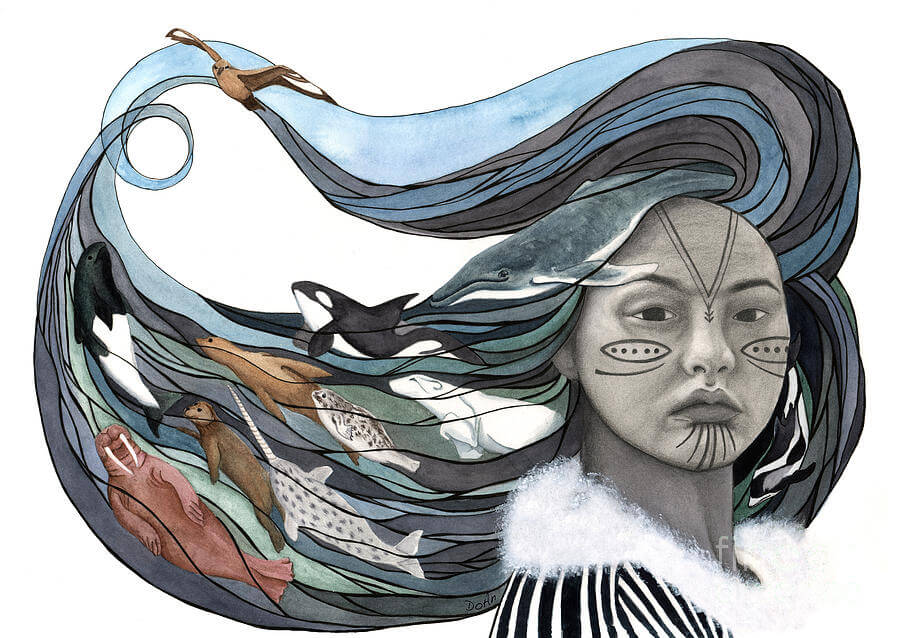 Article Name
SEDNA - The Old Woman Who Lives Under the Sea
Description
Most Eskimo of Northern Canada have an Old Woman legend. The Eskimo of the central arctic called her SEDNA.
Author
Bruce Ricketts
Publisher Name
Mysteries of Canada

I’d like to know the name of artist who created this image. Please let me know. Thanks!
Eri

Thank you for your comment, Do’an. I apologize for the author’s lack of accreditation, and have added your name to the image. Thank you for allowing us to use it.