If I asked you to identify one story of the Metis, you would probably mention Louis Riel.  And you would be right; Riel was probably the best known Métis in Canada’s history.  But there many others. This article is about a couple of them that have common threads with Riel.  First: they were Métis.  Second: they believed that the Métis were a nation in the same way as Indian nations such as the Sioux or the Cree.  The Metis had been in Canada since before Europeans but then they were considered Indians.  It was mixing with the Europeans that made them half-breeds.  The Metis were a mixture of cultures and races but the First Nations were their base.  They lost their official status as a nation for political reasons. 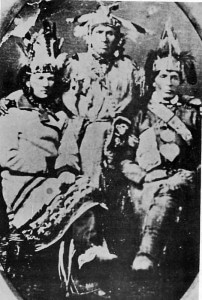 The Northwest Métis were active in Red River from 1812-1816. It is here that the Métis first began to self-identify as the Métis Nation and it was at this time that the first Métis Nation flag was hoisted. The cause that spurred this self-identification was the need to assertthemselves to protect their livelihood. The newly arrived Selkirk settlers were seen as a threat because they were farmers, an activity that would severely impact the Métis who were dependent on the fur trade and the buffalo. The interests of the Métis coincided with the aims of the North West Company and together they sought to actively discourage settlement. Later, the Métis leader, Cuthbert Grant, disassociated his loyalties from those of the North West Company and pursued the ideal of the new Métis Nation.

In 1815, the Hudson’s Bay Company signed an agreement with the Métis.33 It appeared at first to resolve the issues. The settlers left and the Métis returned to the buffalo hunt. However, in the fall a new governor arrived and matters deteriorated rapidly. The Selkirk settlers returned and began to rebuild the colony; tensions increased between the Métis and the settlers. In June of 1816, Grant and a contingent of Métis met Governor Semple and a group of settlers. Within 15 minutes virtually all of the settlers, including the new governor, were killed. The colony was dissolved again and all colonists left. The battle, known as the Battle of Seven Oaks, is  the subject of a famous song composed by the Métis minstrel Pierre Falcon.

Several unsuccessful attempts were made to arrest Grant for the murder of Semple. Finally, Grant voluntarily surrendered and was taken to Lower Canada for trial. There a Grand Jury found no cause to try him for murder and he was released and returned to Red River.

Later, Grant was tried again by proxy in the Courts of Upper Canada. Once again he was cleared of any charges.

On November 9th 1849, an armed party of Métis and Ojibway from Sault Ste Marie took over a mining camp at Mica Bay on Lake Superior. The mine was taken without bloodshed and the miners were evacuated safely within a week. Soldiers were sent to Sault Ste Marie but the ringleaders voluntarily turned themselves in and were arrested and sent to Toronto to stand trial. These included Pierrot Lesage and Charles Boyer, two influential Métis leaders from Sault Ste Marie. The charges were dismissed on procedural grounds.

But while events were unfolding in Toronto, the situation at Sault Ste Marie remained tense and rumors abounded that 2,000 Red River half breeds were coming to act as allies. Instructions were soon issued to William Robinson to negotiate a treaty. The Métis in Sault Ste Marie asked to participate as a separate group, and when this request was denied they asked to have their lands protected in a separate clause in the treaty. Robinson denied that he had any authority to deal with the Métis and they were not included in the treaty as a separate people.  So Métis lands were negotiated away by the Ojibway with no recourse for the Métis.

Grant, Lesage and Boyer all believed in the rights of Métis as an indigenous people… and they were right.  However the incredible bigotry that our ancestors imposed on these people is a bit of our history that Canadians must not forget.

The Metis was last modified: January 22nd, 2016 by Bruce Ricketts