No doot aboot it: we Canadians love our wildlife, and we’re not afraid to show it. Visitors to our country are greeted by images of moose, blue whales, and Canada geese when they step off the plane, and the polar bear, the elk, and the beaver- animals as quintessentially Canadian as ice hockey and maple syrup- keep Her Majesty company on our toonies, quarters, and nickels. 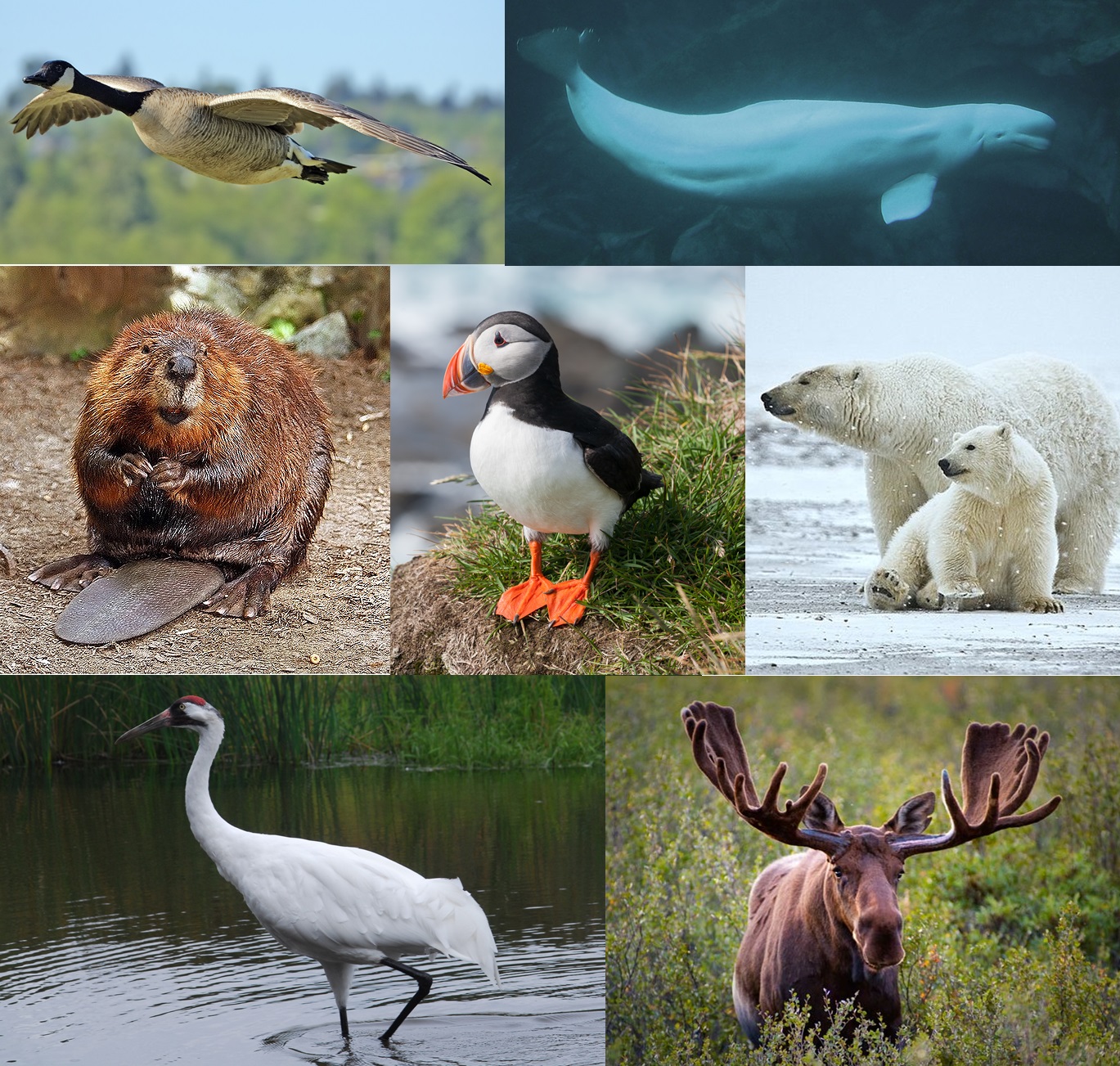 Considering our national affinity for the denizens of our great outdoors, many Canucks would be pleased to learn that Canada played a major role in one of the greatest conservation success stories the world has ever seen: the saving from extinction and the re-proliferation of the buffalo.

The Age of the Buffalo

The bison, or American buffalo, is a massive, horned, woolly ruminant native to North America- a descendant of one of the great Pleistocene giants that wandered across the Bering Strait land bridge during the last Ice Age. Today, the bison can be divided into two subspecies: the plains bison (Bison bison bison), and the larger, more northerly wood buffalo (Bison bison athabascae). 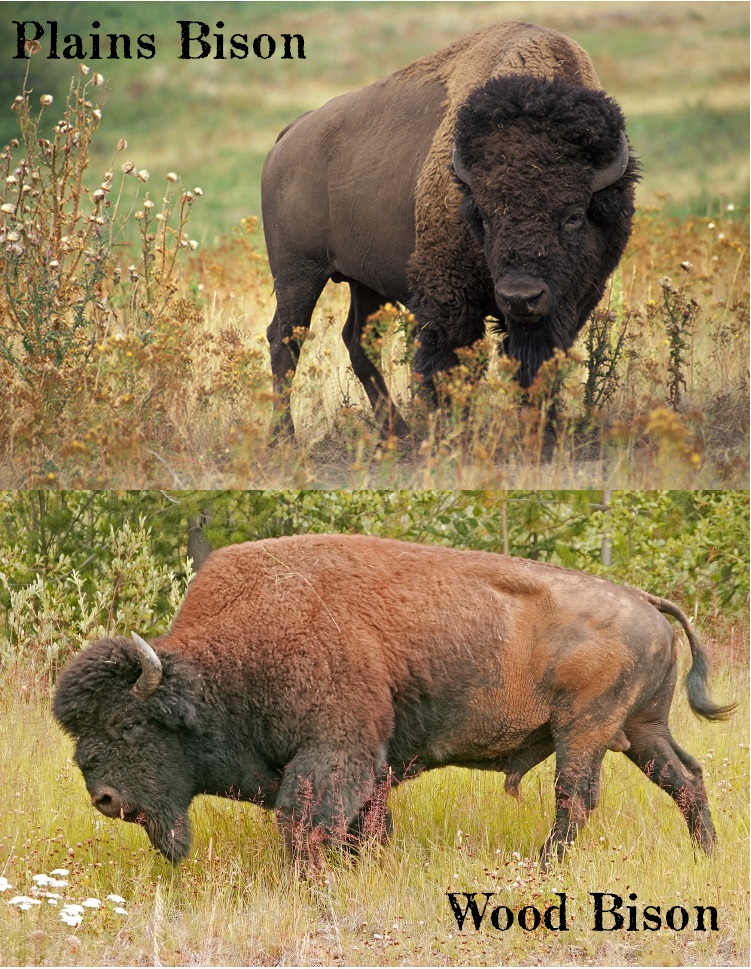 Before the 19th Century, millions of plains bison roamed the grasslands of North America in enormous herds. For millennia, the Plains Indians of what is now Canada and the United States subsisted almost entirely upon these so-called “Kings of the Prairie”, using their meat and marrow for sustenance, their hides for shelter and clothing, their bones for tools, and their dung for fuel.

One of the most effective methods by which the Plains Indians hunted this animal involved natural cliffs, or “buffalo jumps”. During such hunting operations, a band would build two long funnel-like drive lanes extending from the edge of the cliff to the open prairie. These drive lanes were composed of hundreds of stone cairns, each built several meters apart from one another, often augmented with dirt, buffalo dung, tree boughs and sagebrush. 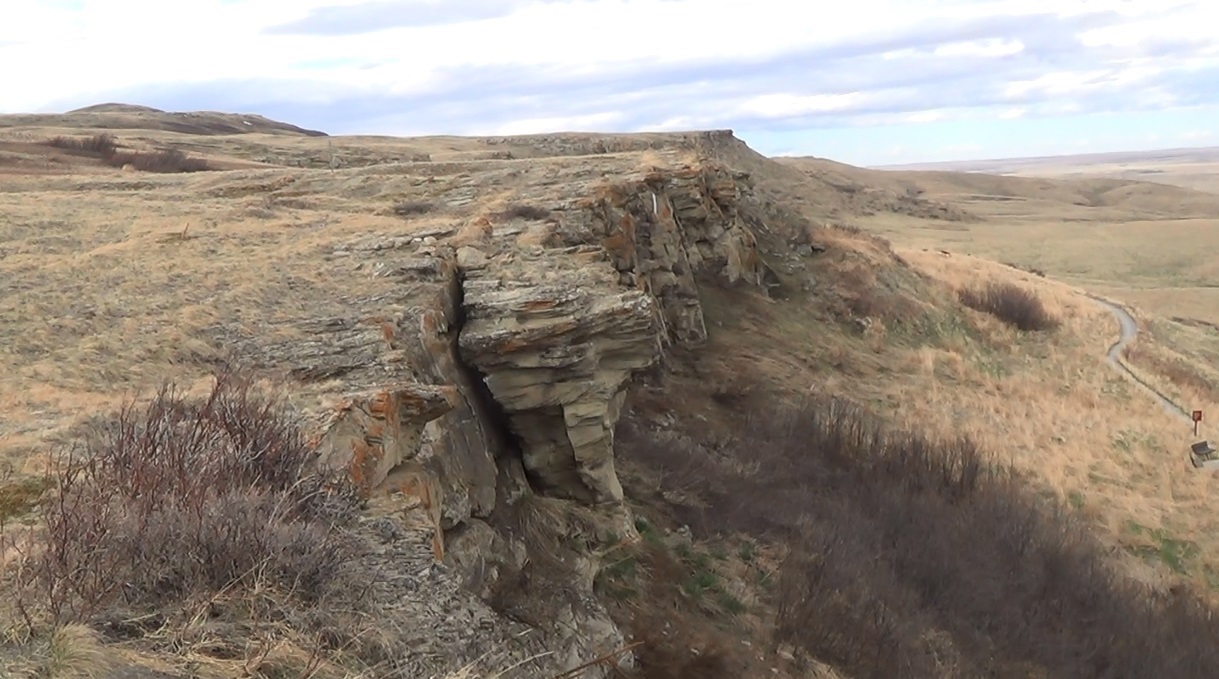 Over a period of several days, specialized hunters well-versed in animal behavior would disguise themselves as juvenile bison and prairie wolves and lure a buffalo herd into the drive lanes. When the majority of the herd was within the lanes, hunters who had concealed themselves behind the cairns would suddenly leap out from their hiding places, screaming and waving buffalo robes. At the same time, the hunter disguised as a juvenile buffalo would “flee” towards the cliff, prompting the startled herd to follow him. Just before he reached the cliff’s edge, the “buffalo runner”, as this elite hunter was called, would retreat to safety behind the line of the cairns. If all went as planned, the entire herd would stampede off the cliff to its death, unable to stop on account of its massive momentum. Hunters waiting below would finish off wounded and crippled buffalo with spears, bows and arrows, and clubs. 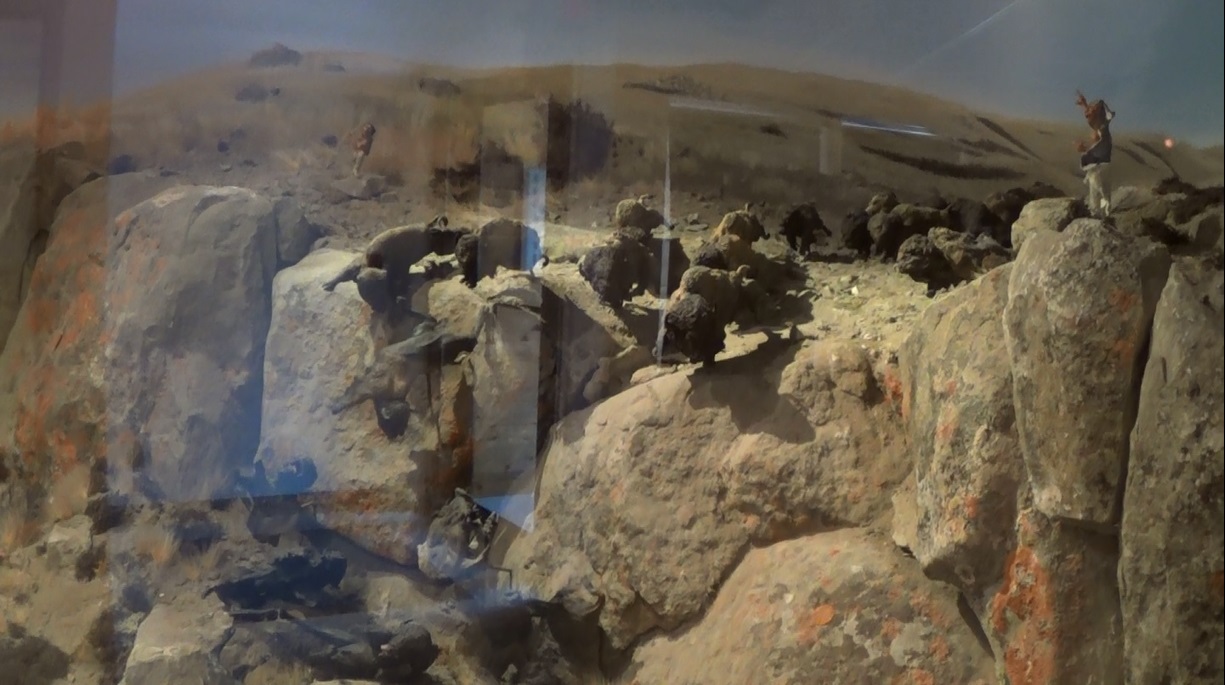 A diorama depicting a traditional buffalo hunt, on display at the Fort Museum of the North-West Mounted Police in Fort Macleod, Alberta.

Although Plains Indian bands sometimes managed to wipe out entire herds during these annual buffalo hunts- believing, as many of them did, that any bison which managed to escape the slaughter would disclose the secret of the hunt to its woolly compatriots- the bison population on the Great Plains and Canadian prairies remained extremely robust.

The Disappearance of the Buffalo

In the late 1700s, the Hudson’s Bay Company and the North West Company, two rival fur trading enterprises, expanded westward onto the eastern edge of the Canadian prairies. Soon, that area, comprising what is now Manitoba and North Dakota became populated by bands of Metis- the progeny of French and Scottish fur traders and First Nations women.

Like the western counterparts of their maternal ancestors, the Metis were excellent buffalo hunters. Instead of driving their prey off cliffs or herding them into buffalo pounds, however, Metis hunters shot them with muskets from horseback. In order to provision their voyageurs for their long voyages along the waterways of Rupert’s Land, the fur trading companies began purchasing huge quantities of pemmican from the Metis, pemmican being a nutritious travel food composed of equal parts dried pulverized buffalo meat and rendered buffalo fat, on which many of the Plains Indians had subsisted since time immemorial. The pemmican trade quickly grew into a thriving industry which slowly took its toll on the bison population on the eastern prairies. 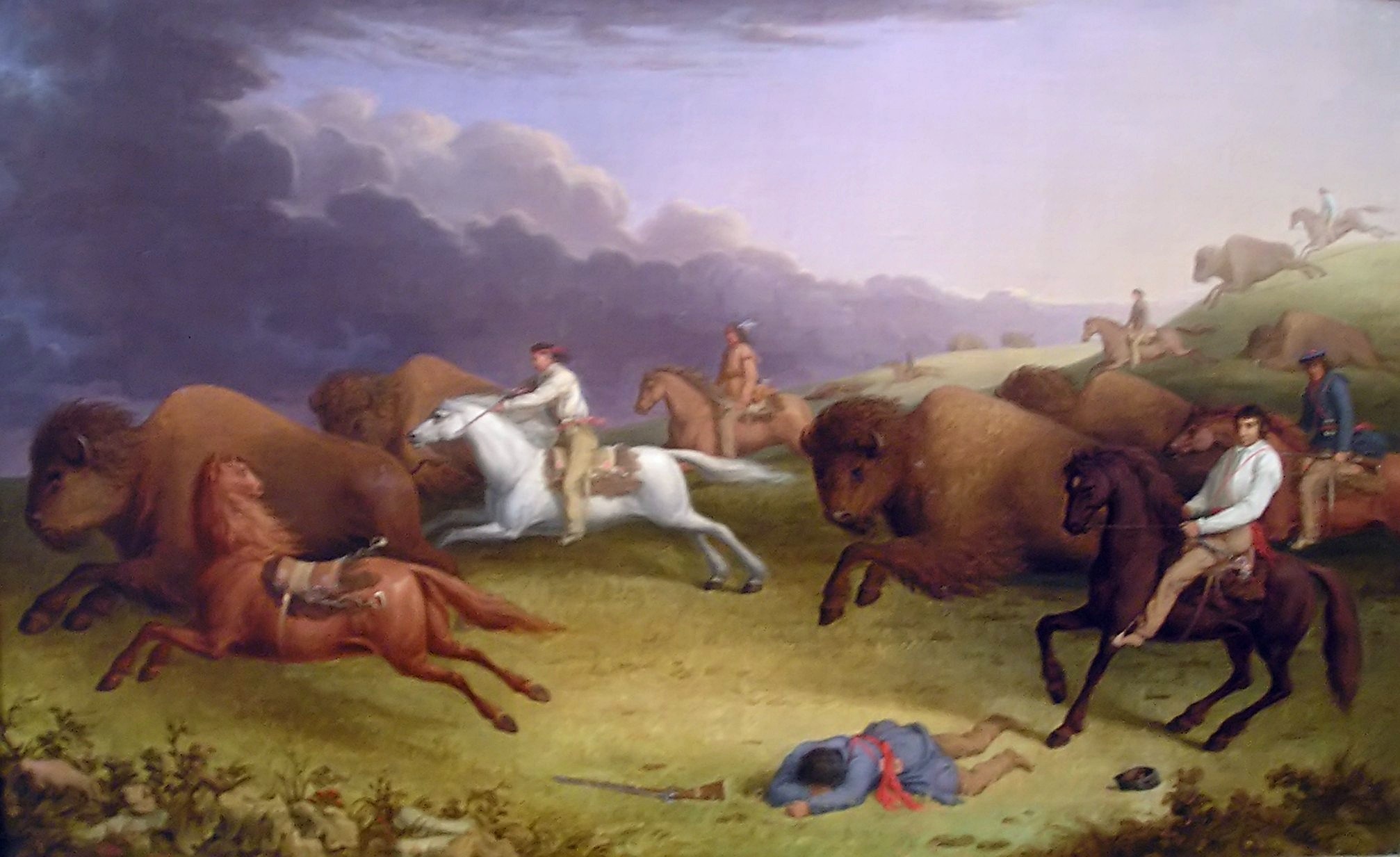 A depiction of a Metis buffalo hunt.

Around this time, the First Nations of the western Canadian prairies were introduced to the horse, an Old World animal that had slowly worked its way up the continent since its introduction to the Americas by Spanish conquistadors. Many of the Plains Indians quickly became proficient horsemen, and their way of life changed completely. With these new equine vehicles, the Plains Indians were able to hunt more quickly and efficiently than ever before. The fruitful buffalo hunts that ensued allowed them to increase their population, resulting in an imperceptible yet very real decrease in that of the plains bison. 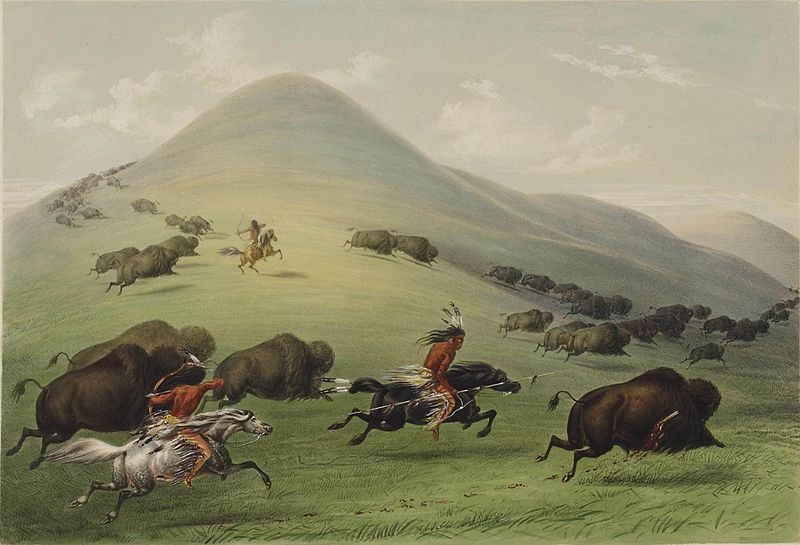 In the mid-1800s, the American Fur Company, a Yankee rival of the Hudson’s Bay Company (the latter having absorbed the North West Company in 1821), expanded up the Missouri River, taking the fur trade to the Great Plains. Certain Plains Indians tribes began to deliver buffalo robes to American traders in exchange for Western goods. One of the items the Plains Indians acquired through this trade were firearms, which allowed them to hunt the buffalo with even greater ease. And thus the bison population on the Great Plains was further curtailed.

In the early 1870’s, a cheap process for tanning hides was developed in Europe. Almost overnight, demand for buffalo hides, which could be transformed into leather for militaries and durable industrial belts for factories, exploded. Unlike buffalo robes, which could only be harvested in the winter when bison coats were thickest, buffalo hides intended for use as leather could be harvested at any time of the year. Soon, hordes of big game hunters poured onto the Great Plains from the eastern States via the Union Pacific Railroad and began slaughtering bison by the millions for their hides alone. The already-dwindling buffalo population began to plummet at an alarming rate. 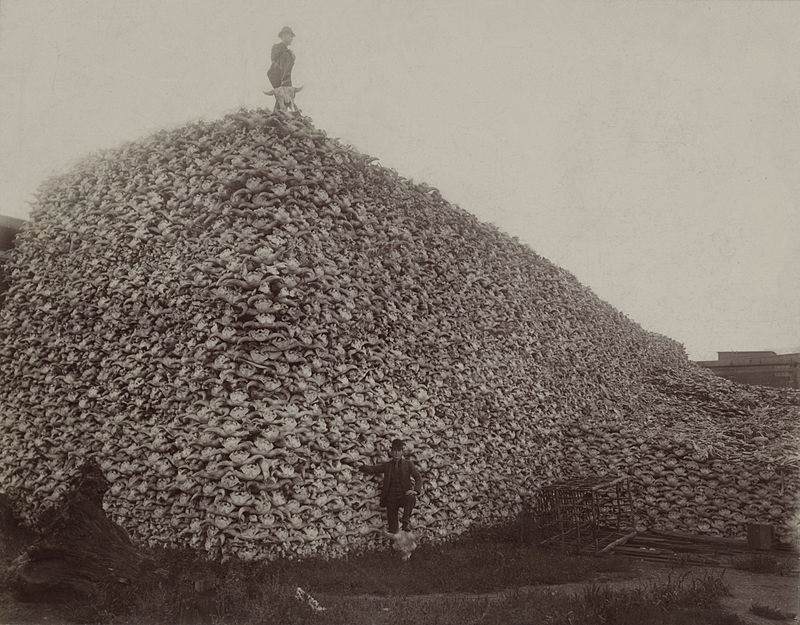 A mountain of buffalo skulls.

The final nail in the coffin of this monarch of the plains was forged at the Battle of the Little Bighorn, which saw the U.S. Army’s 7th Cavalry Regiment wiped out by Sioux warriors under the command of Chief Sitting Bull. Following this defeat, high-ranking U.S. Army officers routinely sponsored and outfitted civilian hunting expeditions, hoping to drive the buffalo to extinction, thereby forcing the Sioux and other uncooperative Indian tribes to settle onto reserves without having to engage them in battle. Although the U.S. Army did not have an “official policy” aimed at the destruction of the buffalo, as popular history sometimes contends, its top brass were manifestly pleased to see buffalo hunters doing “more… to settle the vexed Indian question than the entire regular Army has in the last 40 years,” as U.S. Army General Philip Sheridan put it.

Due to this potent cocktail of market and martial forces, the bison that once dominated the Great Plains were reduced to a scattering of tiny herds teetering precariously on the verge of extinction by the mid-1880s.

Fortunately, in the autumn of 1873, a Canadian Pend d’Oreille Indian named Samuel Walking Coyote had saved four orphaned buffalo calves in southwestern Alberta. He had driven the bison southwest into the United States, over the Rocky Mountains to the Saint Ignatius Mission in Montana south of Flathead Lake. There, the tiny bison herd grew slowly, numbering thirteen head by 1884. 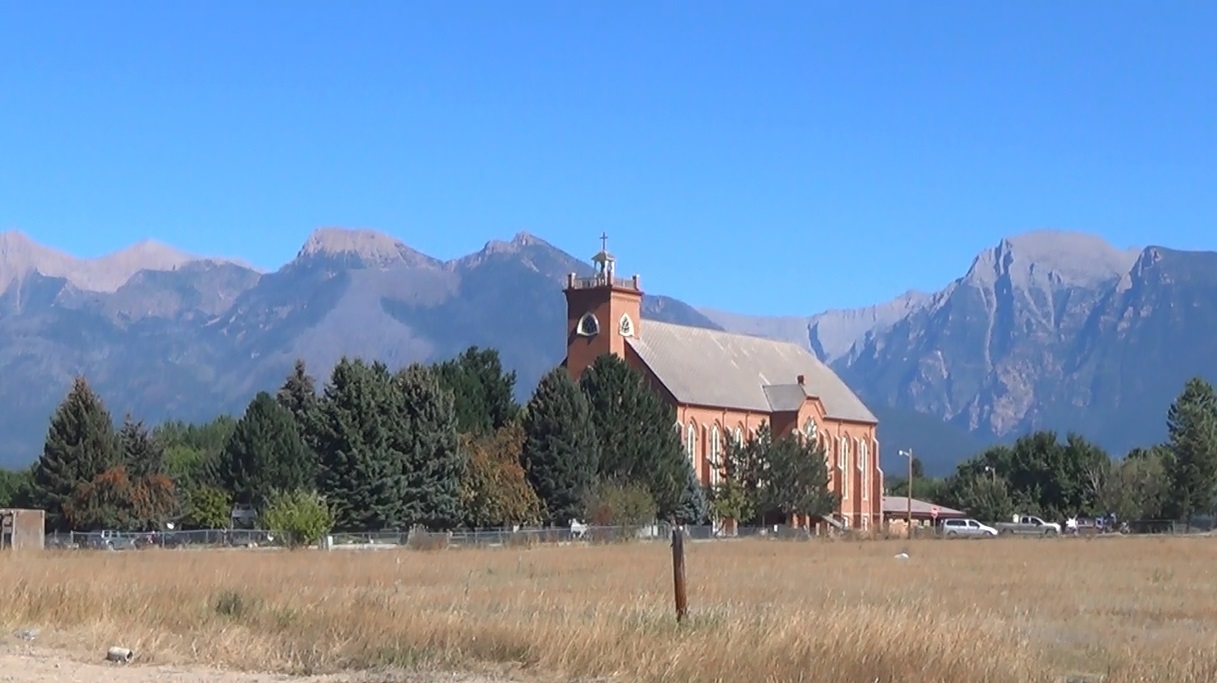 The Saint Ignatius Mission in Montana.

That year, a Mexican half-breed named Michael Pablo purchased ten of the St. Ignatius bison for the hefty price of $2,500 and turned them loose on the neighbouring Flathead Indian Reservation. The three remaining St. Ignatius bison eventually wound up on a ranch near Kalispell, Montana, where they founded a herd of their own.

In 1906, the United States government decided to open the Flathead Indian Reservation for homesteading. By this time, Michael Pablo’s semi-wild bison herd had swelled to a population of 631. Knowing that he would be unable to maintain his herd once settlers moved onto Flathead land, Pablo offered to sell his bison to the U.S. Government. U.S. President Theodore Roosevelt, a great conservationist himself, asked Congress to accept Pablo’s offer, but his proposal was turned down.

Fortunately, a newspaperman from Banff, Alberta, named Norman Luxton learned of Pablo’s desire to sell his herd and encouraged his friend, Frank Oliver, Canada’s Minister of the Interior, to purchase it. Oliver recognized that acquiring Pablo’s buffalo herd would give Canada an opportunity to play a major role in what one writer described as “the greatest animal come-back in the history of the world.” He took Luxton’s advice and, through his office, purchased the Flathead bison. 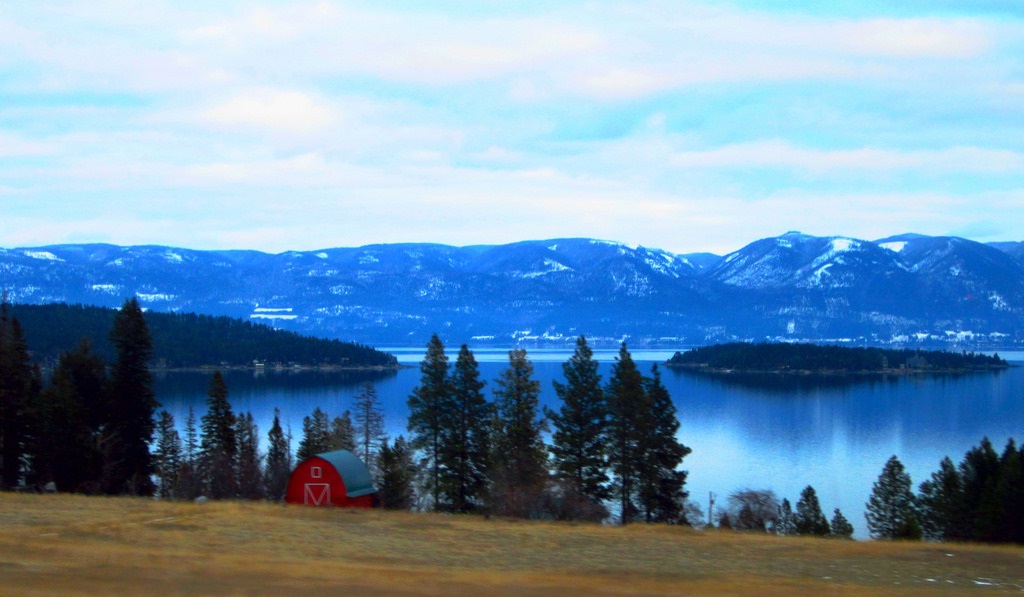 It was arranged for Pablo’s buffalo herd to be driven north into Canadian territory, where it would be resettled on a 170-square-mile plot of government land near the town of Wainwright, in east-central Alberta, which had been dubbed “Buffalo National Park”. Unfortunately, the Flathead buffalo were as wild in temperament as their ancestors. Although Michael Pablo hired America’s best cowboys to drive his herd, the transplant was far more difficult than expected. After six years of gruelling work, which saw a dozen horses gored, ten riders injured, and one cowboy killed, every last Flathead bison had been relocated in Buffalo National Park. Today, Alberta’s Highway 41, nicknamed the “Buffalo Trail”, follows the approximate route of this great bison drive up the Canadian prairies. 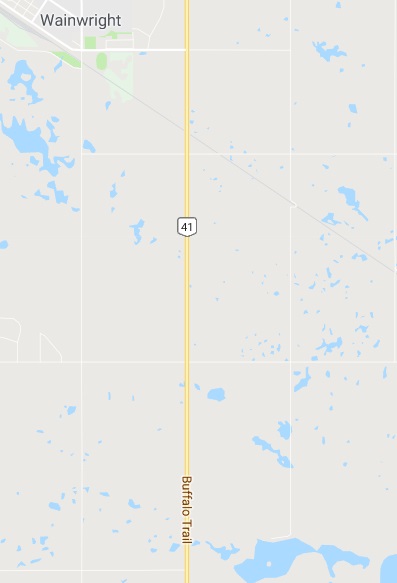 In the early 1900’s, Michael Pablo’s old herd in Buffalo National Park was supplemented by a small, separate, all-Canadian bison herd that had been raised in Banff, Alberta. This smaller Banff herd was descended from five bison calves that had been saved by Winnipeg fur trader C.B. Alloway near Prince Albert, Saskatchewan, in 1874, a year after Samuel Walking Coyote adopted his own buffalo orphans in southwest Alberta. Also added to the Buffalo National Park herd were thirty bison descended from the three St. Ignatius animals put out to pasture in Kalispell, Montana. By 1914, the motley herd in Buffalo National Park, all of its members ultimately descendants of nine Canadian prairie bison calves, numbered 833 head.

The Return of the Buffalo

The bison herd thrived in Buffalo National Park, and within a few decades, its population numbered in the tens of thousands. Government-sponsored mammologists determined that the park was not large enough to support such tremendous growth, and so every year, many of the buffalo were slaughtered for meat. During the Great Depression of the 1930’s, this surplus stock supplied 670,000 pounds of buffalo meat to needy Canadian citizens. By 1940, the culling operation required to keep the herd at a sustainable level had become so impracticable that Canada’s federal government decided to close the park. 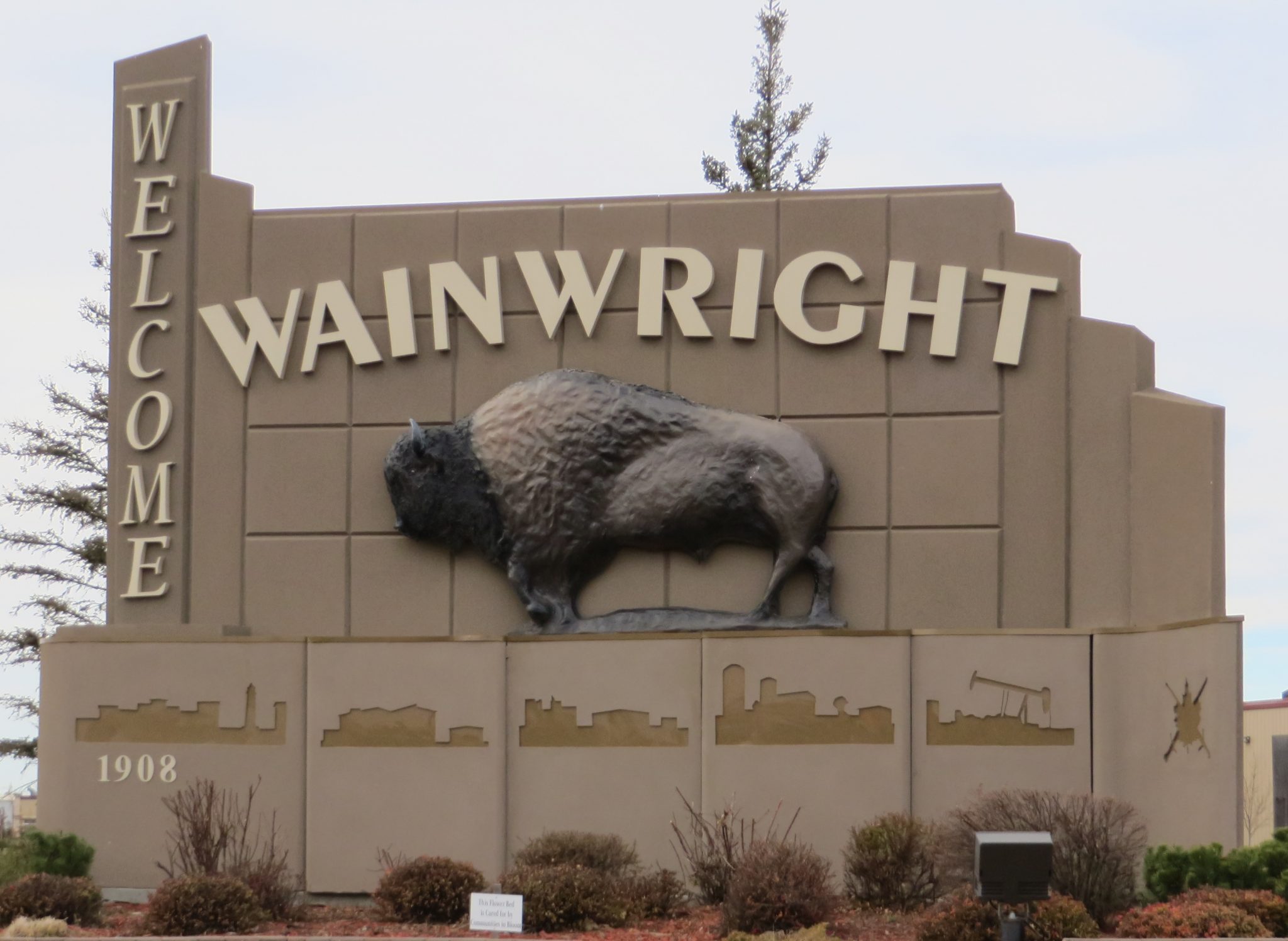 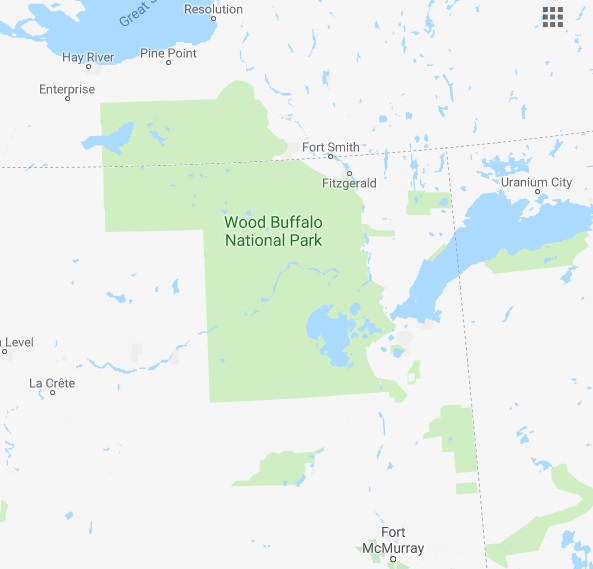 Of course, national parks are not the only abodes of the modern day buffalo. Ranchers all across Canada maintain healthy bison herds of their own. Today, it is estimated that around 400,000 bison live in North America, thanks in no small part to the efforts of a handful of farsighted Canadian conservationists. 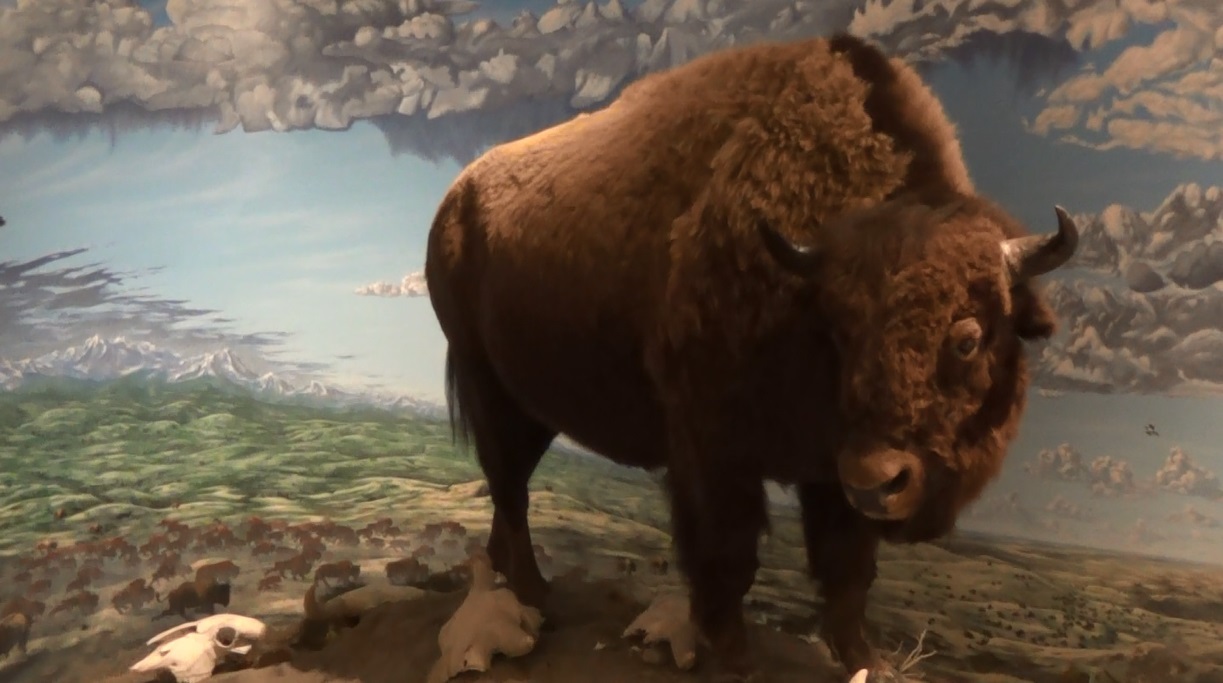 previous post How John A. Macdonald Helped the First Nations
next post Captain Voss and the Voyage of the Tilikum