Little information is known about flood events in the area prior to organized settlement of the region in 1812. Subsequently, the greatest known Red River flood occurred in the spring of 1826. The flood resulted from wet weather the previous autumn, a winter of heavy snow, followed by a late spring with a sudden thaw in early May coinciding with heavy rainfalls. The chance of a flood of this magnitude occurring is about once in 667 years. 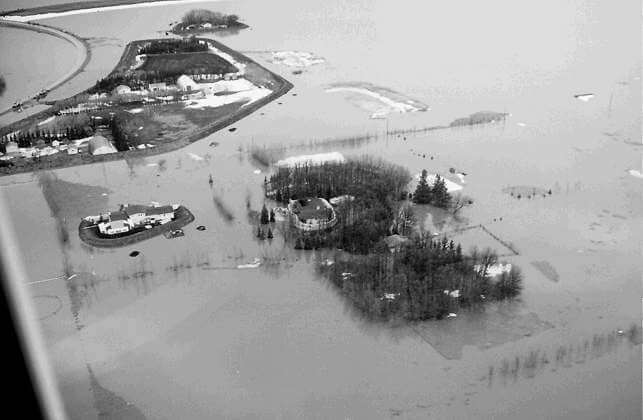 At Fort Garry, the Red River rose 2.7 metres in 24 hours; this quick rise in water level may have been due to an ice jam. The estimated maximum discharge of the river through the town was 6371 cubic metres per second.

Floodwaters forced the abandonment of Fort Garry and virtually destroyed every building in the town. Much of the destruction was caused by floating ice that split trees and demolished houses. Eight settlers in Fort Garry and several Indians along the Assiniboine River were reported to have drowned. Boats from the Hudson’s Bay Company rescued many people stranded on rooftops.

While the frightened inhabitants were collected in groups on any dry spot that remained visible above the waste of waters, their houses, barns, carriages, furniture, fencing and every description of property might be seen floating along over the wide extended plain, to be engulfed in Lake Winnipeg.”

Hunger and famine followed the flood. The long, hard winter had depleted food stores, the floodwaters had swept away livestock and seed, and the soil was too wet to plant until well past the usual planting time. As a consequence, the townsite was abandoned for several years and moved to Lower Fort Garry.

The second and third largest floods occurred in 1852 and 1861, respectively. Again, the floods were due to a wet autumn, heavy snows during the winter, a late and sudden thaw, and rainfall during the snowmelt runoff period.

The flood of 1852 was 0.6 metres lower than the 1826 flood level. The water rose rapidly due to an ice jam. Although flooding was not as extensive as in 1826, more damage was caused due to the interim increase in settlement. About 3500 people, representing 75% of the population, abandoned their homes, and at least one person drowned. Property damage was estimated at 25 000 pounds sterling.

The 1861 flood was 1.2 metres lower than the 1826 flood. Damage was significantly less, with fewer homes evacuated.