The Snakes of Narcisse

If you don’t like snakes then Narcisse, Manitoba is no place for you.  Every year over 70,000 garter snakes over-winter underground there. Why are the snakes found here in such great number?  Good question! 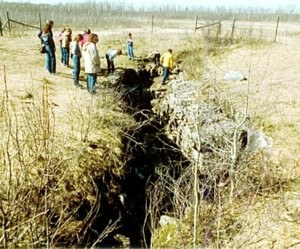 Manitoba was covered by a body of water in the Paleozoic era (between 570 and 225 million years ago). Brachiopods, trilobites, and corals were commonly found in this ancient ocean. As these organisms died they settled in layers on the ocean floor where they became compressed and cemented together. Over millions of years they became limestone, a sedimentary rock that is made up mainly of one mineral, calcite.

So, why are the snakes found in this bedrock underlying much of the Interlake topsoil? Well, where you find limestone rock layers, you may also find crevices, tunnels and caves. Naturally acidic rainwater seeps into the layers through cracks at the surface and dissolves some of the limestone. Sometimes the rock gives way near the surface (perhaps due to the weight above or perhaps due to weakening from centuries of freezing and thawing) and the resulting collapse forms a sinkhole (see photo). 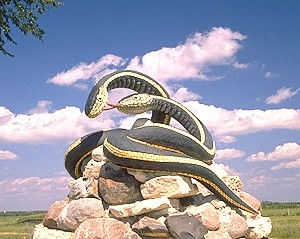 The snakes migrate to the Narcisse area and disappear into the bottoms of these holes.  They hibernate through the winter below the frost line.

In the spring they emerge in large numbers and, after mating, the snakes begin to migrate up to 16 km to get to the nearby marshes.  In the fall, the mature snakes find their way back to the dens and the cycle begins again.

The Snakes of Narcisse was last modified: January 27th, 2016 by Bruce Ricketts

One Response to “The Snakes of Narcisse”