“Strangers are just friends waiting to happen.” I do not know who said it first but it encapsulates the life of an Armed Forces BRAT!

Remember when you were a kid and you were insulted to be called a brat.  Well, there is a whole culture of people in Canada who are proud to be called brat.  They are the Armed Forces Brats (Borne, Raised And Transferred Somewhere).

Membership in this exclusive club is not difficult to achieve.  It merely requires one or both of your parents to be members of the Canadian Armed Forces. (Or for those of my generation, members of the Air Force, Army or Navy!)

I remember my childhood in detail, but I cannot remember, with some exceptions, the names of the kids I went to school with and played with.  Those memories still exist but need to be dragged forward.  Check out Paul Dalby’s grade 8 class (photo on the left) in Trenton for example.  Thirty-eight 13 year olds with raging hormones.  (Now that’s a class size!) 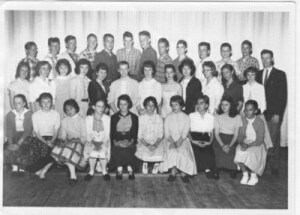 Enter the World Wide Web.  I was surfing the other day and came across a newsgroup named can.military-brats.  To my amazement I actually recognized the name of one of the posters as someone I knew over 40 years ago.  Since that time I have made connection with 5 or 6 people whom I had lost over the years.  And I am sure that more friendships will be re-established over time.

One web site, http://www.milbrats.net, lists over 1000 resumes of Brats looking for their friends.

Brats are generally easy to pick out in a crowd.   They made friends very quickly.  They join activities without hesitation.  But at the same time, they demand personal space on occasion.

If you are an Air Force Brat, you can recognize every aircraft ever flown in Canada because you went to 5 billion air shows (and you still like to go to them!). 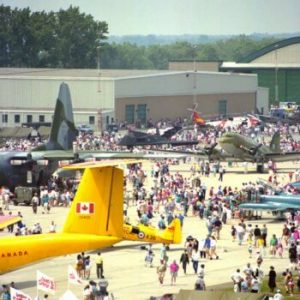 If you were anything like me, you drew pictures of airplanes (usually CF-86’s, if you had any taste at all!) in every school book you used.

I read on one of the many Brat sites that, of the many ways, the best way to recognize a Brat was: 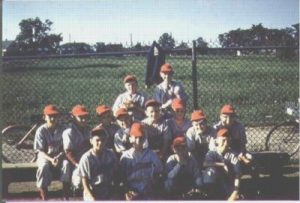 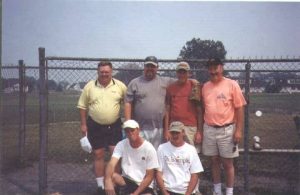 As a special treat for all you Brats who lived in Trenton, below is a photograph taken of the base before the grass fields gave way to paved runways (circa ~1940).  If you look closely there is a Tiger Moth in front of Hanger 2!.  Between 1939 and 1945, Trenton was the most important Commonwealth Training Base in the British Empire.  More than 131,000 aircrew were trained there including almost 50,000 pilots. 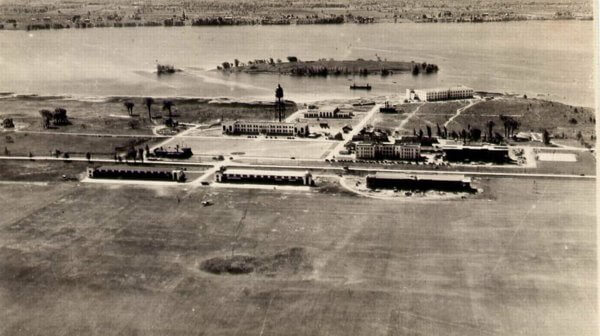 I am a Military Brat
My hometown is nowhere, my friends are everywhere.
I grew up with the knowledge that home is where the heart is
and the family….

Mobility is my way of life.
Some would wonder about roots, yet they are as deep and strong
as the mighty oak. I sink them quickly, absorbing all an area offers
and hopefully, giving enrichment in return.

Travel has taught me to be open.
Shaking hands with the universe, I find brotherhood in all men.
Farewells are never easy.
Yet, even in sorrow comes strength and ability to face tomorrow
with anticipation….if when we leave one place,
I feel that half my world is left behind. I also know that
the other half is waiting to be met.

Friendships are formed in hours and kept for decades.
I will never grow up with someone, but I will mature with many.
Be it inevitable that paths part, there is constant hope
that they will meet again.

Love of country, respect and pride
fill my being when our flag passes in review.
When I stand to honor that flag, so also do I stand in honor of all
soldiers, and most especially, to the parents whose life created mine
Because of this, I have shared in the rich heritage of Military life.
Anonymous

Do you recognize anyone in this picture?  If so send a message to info@mysteriesofcanada.com with the identity. 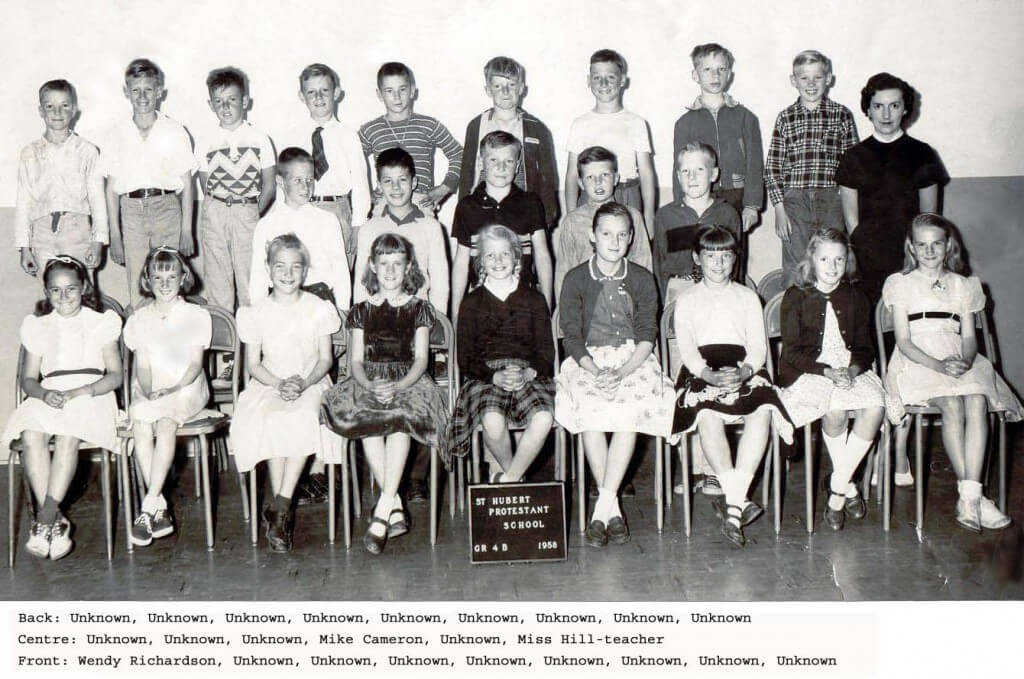 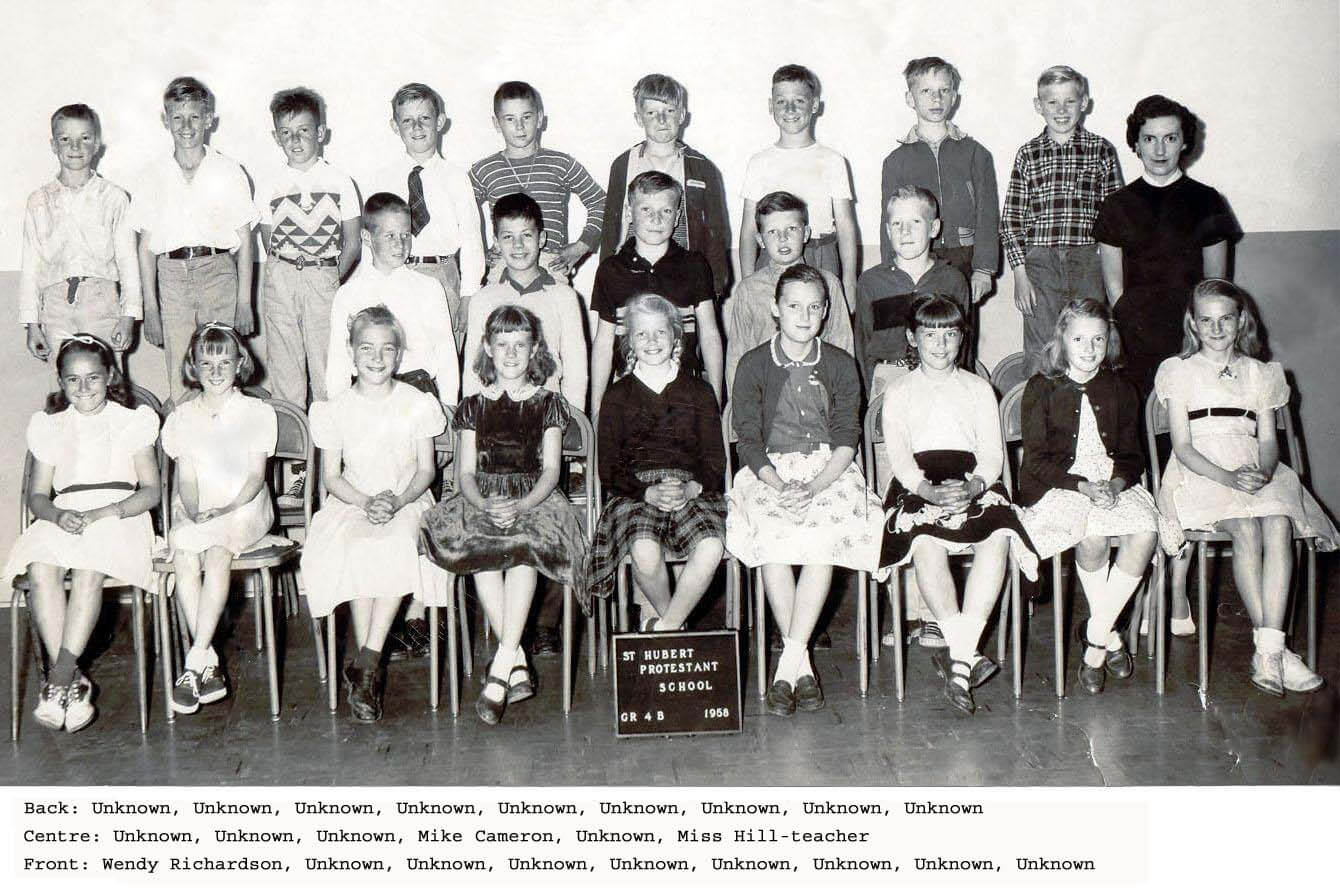 Article Name
Canadian Military Brats
Description
Membership in this exclusive club is not difficult to achieve. It merely requires one or both of your parents to be members of the Canadian Armed Forces. (Or for those of my generation, members of the Air Force, Army or Navy!)
Author
Bruce Ricketts
Publisher Name
Mysteries of Canada

Hello. I started Kindergarden in January 1957 in Marville and then grade 1 at St Huberts Catholic school and was there till grade three. fall 57 to spring 60. Do not remember too many names maybe someone remembers me. Tried to connect to http://www.milbrats.net but it did not work. Maybe the site is gone .. Oh well Hello All!!!

My father was in the Navy. Served on the Bonaventure. Stationed in Halifax, where I was born in 1963. Around 1967, we were posted to Victoria, as my father attended Royal Roads. Then moved to Vancouver. Lived in some crappy apartment on Hasting Street, until we secured a PMQ on Sea Island. I went to Grade One on Sea Island (September 1969), before we were posted to Calgary, and CFB Currie. We lived at 10 Mons Avenue (January 1970 to late June 1972). Paul Taylor my best friend. We went to Currie Elementary. Still looking for Linda from Mrs. Jergens Grade Three/Grade Two split class!!! Then we moved up to St. Albert. Our PMQ day’s were over. 14 Linwood Crescent in Lacombe Park. Friends with Darren. Town, and David Stengrem. Lived in St. Albert until June 1975…until my father was posted to Ottawa. Freezing cold Ottawa.

Is there anyone else who braved the mid Canada Line during the Cold War? Mainly the Arctic, Fort Churchill, Manitoba between 1958 and 1962?

I grew up in Ortona Barracks in Oakville from 1957 to 1962 which was referred to as the Command Central. My father was a Lt Col. It was a wonderful base with apple orchards where all the kids enjoyed climbing. I have nothing but good memories and if anything could not understand the culture outside the barracks in “the real world.” We are very adaptable people with the comings and goings and I will always remember those days growing up among soldiers and their families as a gift.

All the PMQ’s I ever lived in have been removed from the face of the Earth. And the bases they were stationed on have been erased completely. Such is the lot of Air Force brats whose parent served on the now defunct Pinetree Line during the Cold War. Looking around on the Internet for some remnant of my childhood makes me feel like we made it all up. Anyone out there who lived at RCAF Edgar, or Sea Island, or possibly even Hornell Heights between 1954 and 1963? Would love to know it was real.

I’m here if anyone recognizes my name!

(4 Wing 54-58 approx) Seem to have lost track of everyone… anybody still around?

Born 1944 in Middleton Nova Scotia, my maiden name was Dagg, my father was In RCAF lived on Greenwood Air Force base, have lived in Trenton, 3 Wing Zweibrucken, Langar Air Force base in England, Winnipeg, and Metz France. Can’t remember last names of friends, old age creeping in, but would like to reconnect with old friends.

I lived in(born) in whitehorse in 1959, Centralia 61-63, Gimili, Manitoba 63-66, Dana(Sagehill) Sask 66-68, London Ontario 68-till 78. I have though of many friends who has stuck in my mind over the years. Some I can’t remember their last names but have never forgot them. Some you have played with everyday and I wish I could see them one more time to reminisce. You did feel a loss but had grown use to it. I did join the Canadian Force for 23 years and was shocked by how many Cdn Military Brats were in the Military. Wish I could see these people one more time.

We who went to school with you felt a loss when you left. I don’t remember ever hearing from anyone who left, but the memories we shared sure remained. Wainwright Blessed Sacrament in the fifties.