The George Cross and Canadians

The George Cross was instituted to recognize extreme bravery and heroism in the face of extreme danger.  The award was not limited to military persons (see this link) but there were five Canadian military men who did stand out as deserving. 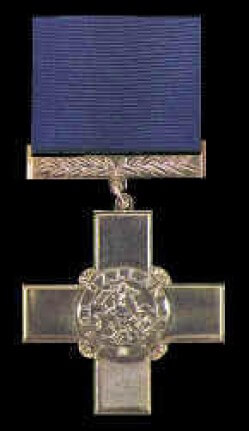 The RCAF’s first George Cross was awarded in November 1941, to Leading Aircraftman (LAC) K.M. Gravell, a wireless operator-air gunner undergoing training at Calgary. LAC Gravell, despite serious injuries, which proved fatal, gallantly endeavoured to rescue his pilot from the blazing wreckage of their crashed Tiger Moth Aircraft. He was buried at Mountain View Cemetery in Vancouver, BC.

The second RCAF George Cross was awarded posthumously to LAC K.G. Spooner in May 1943. A student navigator with no pilot training at London, Ont., LAC Spooner took over the controls of an Anson Aircraft when the pilot suddenly fainted. His action enabled three comrades to bail out. Soon after, the Aircraft crashed into Lake Erie. He was buried in his home town of Smiths Falls, Ontario.

In August, 1944, Flying Officer R.B. Gray of the RCAF, was the navigator of a Wellington aircraft which was shot down into the Atlantic by a U-boat. Flying Officer Gray and three other members of the crew managed to extricate themselves from the aircraft. Despite a severe wound in the leg, Flying Officer Gray succeeded in inflating his own dinghy, and assisted into it his Captain, who had also been wounded. Cries were shortly heard from another member of the crew, who had broken his arm; Flying Officer Gray helped him also into the dinghy. Although suffering intense pain, Flying Officer Gray refused to get into the dinghy, knowing that it could not hold more than two persons and for some hours he hung on to its side, aided by one of its occupants and by the fourth member of the crew. In spite of increasing pain and exhaustion, he steadfastly refused to endanger his comrades by entering the dinghy, and eventually lost consciousness and died. When it become light his companions, realising that he was dead, were forced to let his body sink. Flying Officer Gray displayed magnificent courage and unselfish heroism, thus enabling the lives of his comrades to be saved.

Their gallantry and self-sacrifice is recognized by the George Cross.

But there were many other GC recipients from Canada, including:

Corporal James Hendry was posthumously awarded the George Cross for the gallantry and self sacrifice he displayed on June 13th 1941. He was serving with No.1 Tunnelling Company of the Corps of Royal Canadian Engineers, who had been given the task of digging the Laggan Tunnel to supply water to the British Aluminium works at Kinlochleven, Scotland, when a fire broke out in a powder house full of explosives. The twenty nine year old ordered his colleagues to run to safety and attempted to extinguish the blaze, rather than attempt to escape the inevitable explosion. The huge blast also killed his colleague John Macdougall Stewart, and seven more were injured.  He was buried in Brookwood Military Cemetery in Surrey. The Royal Canadian Engineers dedicated their range control building to the corporal in recognition of his bravery in 1994

Sergeant John Rennie was posthumously awarded the George Cross for the gallantry he displayed in protecting others after a training accident at Riddlesworth near Slough on the 29 October 1943.  Serving with the The Argyll and Sutherland Highlanders of Canada (Princess Louise’s), he was overseeing a grenade throwing drill when a live grenade rolled back into the trench his men were in. He pushed another man out of the way, picked up the grenade and attempted to throw it to safety as it exploded. He was mortally wounded but, by his sacrifice, had protected his comrades from the explosion.  A plaque in his honour is displayed on the wall of the Armouries on the east side of James Street North in Hamilton, Ontario

Article Name
The George Cross and Canadians
Description
The George Cross was instituted to recognize extreme bravery and heroism in the face of extreme danger. The award was not limited to military persons.
Author
Bruce Ricketts
Publisher Name
Mysteries of Canada