George Lawrence Price was born in Falmouth, Nova Scotia, on December 15, 1892, and raised on Church Street, in what is now Port Williams, Nova Scotia. He lived in Moose Jaw, Saskatchewan, when he was conscripted on October 15, 1917.  He served with “A” Company of the 28th Battalion, Canadian Expeditionary Force during the First World War. 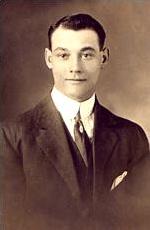 On November 11, Private Price was part of an advance to take the small village of Havré. After a crossing of the Canal du Centre into the town of Ville-sur-Haine under German machine gun fire, Price and his patrol moved toward a row of houses intent on pursuing the machine gunner who had harassed their crossing of the canal. The patrol had entered the house from which they had thought the shooting had come, but found the Germans had exited through the back door as they entered the front. They then pursued into the house next door and again found it empty. George Price was fatally shot in heart by a German sniper as he stepped out of the house into the street, against contrary advice from a house occupant, at 10:58 a.m., November 11, 1918.  He died just 2 minutes before the armistice ceasefire, that ended the war, came into effect at 11 a.m.

He was the last Canadian to die in this senseless war-to-end-all-wars.