John Pegg was fondly known as “The Chief” to over 6000 prairie sailors who trained, one or another under his guidance in Naval routine, discipline and folklore.

John Pegg joined the Royal Navy as a Boy-1 in 1913 for six (6) cents a week. Retiring from the Royal Navy as a Chief Petty Officer after 24 years, in 1937. John left London to come to Montreal. Shortly after, he transferred to the Gertrude Avenue (No. 4 Fire Hall), The Winnipeg Division, which at the time had a full division complement of 100 Reserves. John Pegg was distinctively known as the Training Chief, and during these times was the most respected individual in the Division. With the onset of war, the Security Storage Building on Ellice Avenue became The Winnipeg Division, but was called the Old Freighter by John. 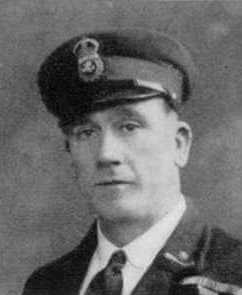 Chief John Pegg became known as “Mr. Navy”. In 1942, when John Pegg went to Halifax Dockyard to instruct experienced seamen for higher ranks, it made all the local papers. He became a Commissioned Warrant Bosn. He remained there until 1946 whereupon he transferred to HMCS Peregrine, where processing for Discharge of Naval personnel was taking place at the cessation of the European War.

In 1947 John returned to CHIPPAWA and was involved in Recruiting and training until 1952, at which time he became Assistant Staff Officer for the Sea Cadets in Manitoba and Saskatchewan and the Northern points such as Flin Flon and Lynn Lake. It was at this time that he took the Queen’s Commission and became an officer.

Retiring in 1957, with the rank of LCdr, John was famous for pulling up a bollard and, outspinning any yarn a prairie sailor could think up. John and Mrs. Pegg attended, in an honorary capacity, many Naval Functions up until his death in 1984.

Note: If you like this story read also about the Shipwreck in Saskatchewan!

Article Name
John Pegg - Chief of the Prairie Navy
Description
John Pegg was fondly known as "The Chief" to over 6000 prairie sailors who trained, one or another under his guidance in Naval routine and discipline.
Author
Bruce Ricketts
Publisher Name
Mysteries of Canada