Where does one begin writing about Louis Riel and how does one encapsulate his life, accomplishments and his mistakes. Mysteries of Canada is not intended as a singular source of reference for any one subject. Our intent is to pique your imagination and your interest in a subject so that you will want to read more.

So it is with the story of Louis Riel. There is so much which needs to be left out to make this story fit the site. We can only urge you to investigate and come to your own conclusion. Louis Riel was born October 22, 1844 on a farmstead at the juncture of the Red and Seine rivers, present day Winnipeg. He was hanged as a traitor on November 16, 1885. During those 41 years he would help found two Canadian Provinces.  He also helped find identity for the Métis people and shake up the status quo of Canada.

Louis Riel was branded a traitor to Canada – but he was no traitor. He was a patriot who stood up for his people and his beliefs. He was also a victim of prevailing prejudices of his time.

In November of 1869 Riel, as a leader of the Métis people and the territory of Red River, spearheaded the writing of a List of Rights preceding the entry of Manitoba into confederation. These rights were not the musings of a revolutionary – but rather that of a democrat. Understand that when the French-speakers (as they were called) and the French-speaking Métis were very much in the majority in the Territory.

There was, at this time, in the territory, however, a group of transplanted Loyalists who saw this list as evidence of sedition. And they had the ear of the Government of Canada. The Government procrastinated on accepting the List of Rights.

In frustration at the lack of action from Canada and in response to a transfer of the territory from Hudson’s Bay Company, he established a provisional government to fill a perceived governance void.

Part of the reason for the Provisional Government was a response to pressures from the United States for the territory to become part of the Union. Riel fought against the Americans and helped bring, what was to be later called, Manitoba into confederation with Canada.

However good and well-intentioned the Provisional Government was, it was seen as a revolution by the Government of Canada.

It was also seen as thus to a group of Orangemen originally from Upper Canada. A group of these men took their revenge on Riel and his Provisional Government by trying to overthrow it.

Thomas Scott, a violent and racist man and one of the persons attempting the overthrow, was caught and charged with treason. After a lengthy trial (which seems to have been more democratic than Riel’s own trial!) Scott was found guilty and executed by a firing squad.

For his part in the creation of the Provisional Government (and partly for the death of Scott), Riel was branded a traitor himself. He was promised an amnesty by the Prime Minister of Canada but it never came. In 1875 he was banished to the US for five years.

Banishment was not easy on Riel. Cut off from his country and his people he lapsed into deep states of depression mixed with states of utter euphoria. He began to talk about encounters with the “Divine Spirit” and believing himself to be a prophet of the New World. He was smuggled by friends across the border and on March 6, 1876, he was committed to an asylum in Quebec.

Some say that Louis Riel was suffering delusions. Some say that he was acting crazy for his own purposes. Whatever the truth, he was treated as insane for almost two years and finally released January 29, 1878.

In June 1883, Riel decided to return to Manitoba. Finding only menial work and an uncomfortable environment, he uprooted his family and moved to Battoche, Saskatchewan. In Battoche he was greeted as a hero by the Métis who had relocated to the area from Winnipeg when immigration from the east had made them a minority.

The Prime Minister of the day was John A. MacDonald. He was not considered a good friend of the people of the prairies. There was even secession talk. The idea of the West forming a new country with Manitoba, the North West Territories and British Columbia was a big topic of the day. Combine this with the widespread starvation and scurvy epidemic which affected the west in 1883 – 84 and you just knew that something was going to happen. And John A. didn’t help matters any when, in response to the pleas for food, he sent in more police.

On March 5, 1885, Riel met with 10 other Métis and swore an oath to: “Save our country from a wicked government by taking up arms, if necessary.”  It all went downhill from here.

It all seemed to boil to a head at a place called Duck Lake. Here some of Riel’s compatriots, but not Riel, had a confrontation with the local constabulary. A number of police were killed and captured.

On March 29, the Stoney Indians shot and killed a government teacher who refused to give them food for their starving tribe. On March 30, the Cree, similarly hungry and frustrated, sacked the fort at Battleford. On April 2, nine whites were killed by Indians during an attack on Fort Pitt.

In all this he was seen by the Métis and the Indians as the “spiritual leader”. The government of Canada, on the contrary, saw him as a trouble maker, a zealot and a traitor.

By May 15, it was all over. The armies and police of Canada had put down the revolt and a shoeless Louis Riel surrendered his freedom to the police. He was transferred to Regina and charged with high treason.

In a trial which lasted two weeks he was found guilty. His lawyers appealed of course but to no avail. His fate was sealed.

November 16, 1885 at around 8:30 AM. Louis was led to the gallows, the trap door snapped open, and Riel was into the history books.

Was Louis Riel a hero and a martyr or just a criminal? Even after 120 years the jury is still out, although it leans towards him as a bona-fide Father of Confederation or, at least, a patriot.

We urge you to read more about Louis Riel. Understand him. Understand the time in which he lived. Come to your own conclusion! 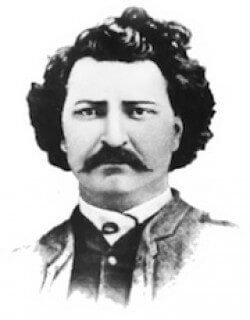 Article Name
Louis Riel – Martyr, Hero or Traitor?
Description
Louis Riel was branded a traitor to Canada – but he was no traitor. He was a patriot who stood up for his people and his beliefs.
Author
Bruce Ricketts
Publisher Name
Mysteries of Canada