The McAdam Shield Shovel was designed to solve two issues on the battlefields of World War One.  Conceived by Ena McAdam, personal secretary to Sam Hughes, the Canadian minister for the Department of Militia and Defence in 1913, the shovel held the combined function to operate as a spade and a shield from which soldiers could securely fire from at enemy positions and advantageously not be targeted in return.  The shovel was broad and flat – with a hole in it! 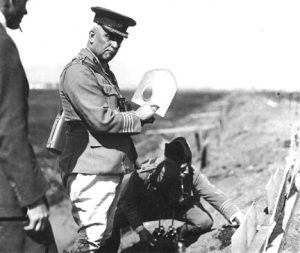 But there were two problems with the shovel.  As a shield it had to protect the sniper from return fire, so it was quite thick – and heavy.  Even with all the thickness it was not able to deflect a bullet from almost any German gun.  Secondly, as a shovel it was flat with a hole in it.  That made it difficult to use at the best of time.

In 1914, Hughes ordered 25,000 of the shovels at a cost of $34,000.  After field testing, most of the theatre commanders refused to issue the shovels to their troops.  The project was cancelled and the shovel sold for scrap for $1,400.  However not all the shovels were scrapped.  Apparently some Canadian snipers employed the units by sticking multiple shovels together to create a thicker shield.

It is not known if any of the McAdam Shield Shovels still exist today, but they could be valuable to collectors if you had one.

My father once told me that the features of a good shovel were stiffness and lifting area.  If the shovel was not stiff enough it would wobble and bend and if the area was too large it would be too hard to lift.  Conversely, if the area was too small, the shovel would require more work.  I wonder what he would have said about the McAdam Shield Shovel.

One Response to “The McAdam Shield Shovel”

Hello Bruce – Ruthven Park National Historic Site in Cayuga (Haldimand County) has two MacAdam shield shovels in its collection. One is currently on loan to the Canadian War Museum for their exhibit “Fighting in Flanders: Gas. Mud. Memory.”
The Thompson family were associated with the Ruthven Park estate from the 1840’s until 1993. Lt. Col. Andrew Thorburn Thompson took the 114th Regiment C.E.F. overseas. His two sons joined up as well. The site has a good collection of WW 1 uniforms and equipment.