Richard Rohmer was born in Hamilton, Ontario, in 1924.  He led an quiet life until leaving high school.  His first job after school was with Fleet Aerospace in Ft Erie.  He developed a love of flying and in 1942.  At the age of 18, he signed up with the RCAF and flew a P51 Mustang in the European theatre. Rohmer flew a reconnaissance aircraft on D-Day and over the beaches of Normandy.  On one mission he spotted a German staff car, which turned out to be that of Field Marshall Erwin Rommel, the Desert Fox and the commander of German defences along Normandy.   Based on Rohmer’s spotting, Lt. Charlie Fox, a Canadian flying with 412 Squadron, strafed the staff car and forced Rommel essentially out of the war.  This incident is considered by many as a turning point for the allies in Europe.

Rohmer also took part in the liberation of France, Belgium and Holland.  For his efforts he was awarded many medals and honors including: the Distinguished Flying Cross, Officer of the Order of Leopold (Belgium), and the Chevalier of the Legion of Honor (France).

He returned to Canada after the war and studied law while still in the RCAF.  He attained the rank of Major General after his retirement, as Chief of Reserves of the Canadian Armed Forces.  He has remained active as a lawyer specializing in military affairs.

Rohmer currently lives in Collingwood, Ontario where he still flies and writes.  Rohmer has written over 20 books including: Separation, Separation 2, Ultimatum, Balls, and Triad.  His newest book, Ultimatum 2 is very timely, as it deals with sovereignty of Canada’s north.  He was made an Officer of the Order of Canada in 1990. 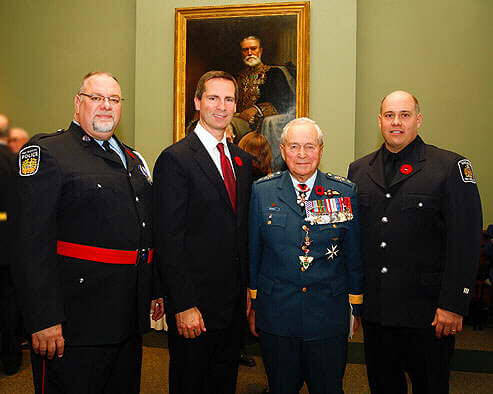 Article Name
General Richard Rohmer
Description
Richard Rohmer was born in Hamilton, Ontario, in 1924. At the age of 18, he signed up with the RCAF and flew a P51 Mustang in the European theatre.
Author
Bruce Ricketts
Publisher Name
Mysteries of Canada