The Lepers of Sheldrake Island

I remember this one from my microbiology days; Mycobacterium leprae… Leprosy.  The disease that could scare the bejeebies out of toughest of men.  Did you know there are almost 2000 new cases found in world every day. That is 750,000 new cases per year!We normally do not think of Leprosy (also known as Hansen’s Disease) as a Canadian disease but it was!

Back in the 1820s, Ursule Landry Benoit of the Tracadie area died from leprosy.  Her flesh had become hard and scaly and hideous swellings and sores distorted her face and body. 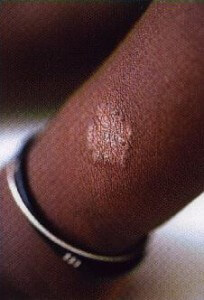 How leprosy was introduced into New Brunswick, mainly Gloucester and Northumberland Counties, is unclear but one possibility is it was brought by the sailors.  One fact is certain the horrible disease slowly spread from family to family to neighbour.  People were not so concerned of death as of the living horror it left its victims to live in and the stigma that was attached to the outcasts as well as family members.

Like the lepers of the Bible, the early New Brunswick leper was left unattended, living in a hut where the Overseers of the Poordeposited weekly rations of food and firewood.

On April 16, 1844, the New Brunswick government passed legislation entitled “An Act to Prevent the Spread of a Disorder now existing in Certain Parts of the Counties of Gloucester and Northumberland“.   The newly appointed Board of Health chose Sheldrake Island in the mouth of the Miramichi River for the lazaretto.  On July 19, 1844 a group of 18 lepers, ranging in age from 8 to 46 were admitted to the lazaretto.  These Lepers were forced to leave home and families and take up residence on the dreaded Sheldrake Island.

There were many escapes from Sheldrake and these were not confined to only adults.  Ten year old Barnabe Savoie eluded guards to make it home only to be located and taken from his father and returned to Sheldrake.

In 1849, the remaining 31 lepers were transferred to a new lazaretto at Tracadie.

The Religious Hospitallers of Saint Joseph came from Montreal, in 1868 to take care of the lepers at Tracadie and they continued this ministry until the last leper left in 1965.  At this time, lepers from across Canada were sent to Tracadie… except the Chinese, who were all sent to D’Arcy Island in BC.

Leprosy can be successfully treated these days and the last lazaretto closed in Canada in 1956!

The Lepers of Sheldrake Island was last modified: February 9th, 2017 by Bruce Ricketts

One Response to “The Lepers of Sheldrake Island”

The Lazareto in Tracadie closed in 1965.