At the beginning of the French and Indian War (1754-1763) fought between the colonies of British North America and the French colony of New France, both British and French forces enlisted the support of their respective First Nations allies. The French colonists supplemented their troops with Mi’kmaq, Maliseet, Algonquin, Ojibwa and Huron warriors, while the British colonists received the support of the powerful and warlike Iroquois Confederacy.

While treating with his Iroquois allies during this time, Sir William Johnson, commander of the British colonial militia forces, made friends with Chief Canagaraduncka, head chief of the Mohawks (The Mohawk tribe is one of the five Nations that make up the Iroquois Confederacy). Canagaraduncka’s Christian name, Barnet, was often corrupted as ‘Brant’. As such, Chief Canagaraduncka was more popularly known to the English as Chief Brant.

Chief Brant, who was a widower by the time Johnson met him, took a widow named Owandah as his wife. Owandah had two children with her former husband, a daughter and son whose Christian names were Molly and Joseph. Johnson, during his visits to Chief Brant’s Mohawk village in the early 1750’s, always stayed in Brant’s lodge, and took special note of the chief’s two step children. Years later, Johnson would take Chief Brant’s step-daughter Molly as his wife. 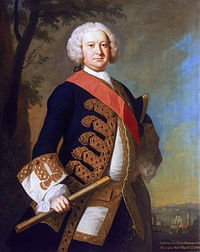 Sir William Johnson took Joseph Brant under his wing, serving as his patron and mentor for many years.

Molly’s brother, Joseph, had the Iroquois name Thayendanegea, or ‘Two sticks bound together for strength’. However, he was often referred to by the English as ‘Chief Brant’s son Joseph’. This label was eventually shortened to ‘Brant’s Joseph’, and was later inverted to ‘Joseph Brant’.

Teenage Joseph Brant took to the warpath during the French and Indian War along with his Mohawk compatriots. He related that, during his first battle, which took place when he was about 12 years old:

“This being the first action at which I was present I was seized with such a tremor when the firing began that I was obliged to take hold of a small sapling to steady myself; but after the discharge of a few volleys, I recovered the use of my limbs and the composure of my mind so as to support the character of a brave man, of which I was especially ambitious.” 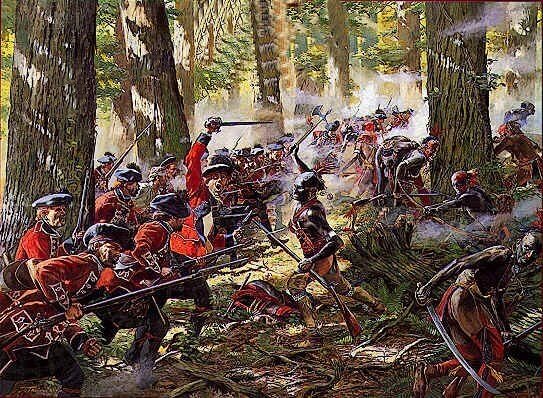 As a teenager, Joseph Brant fought for the British during the French and Indian War.

Joseph Brant went on to participate in many of the French and Indian War’s most important battles, including the Battle of Carillon and the Battle of Fort Niagara. During this time, he fought alongside Sir William Johnson, who had visited his step-father’s village frequently when he was a child, and with whom he quickly built rapport. In 1761, before the war was over, Johnson, seeing promise in the young Mohawk, sent him to Connecticut along with three other Iroquois to study English at Moor’s Charity School- and Indian seminary which would, in 1770, move to New Hampshire to become Dartmouth College. There, he learned to speak, read and write English, and soon was put to work translating English texts into the Mohawk language.

After receiving a formal English education, Brant left the seminary and began to work for Sir William Johnson as an interpreter. He served as Johnson’s interpreter for nearly a decade. In the early 1770’s, Brant, due in no small part to Johnson’s patronage, was made a war chief of the Mohawk Nation. In 1772, he, along with 182 British-Allied First Nation warriors received a silver medal for his services to the British Crown. 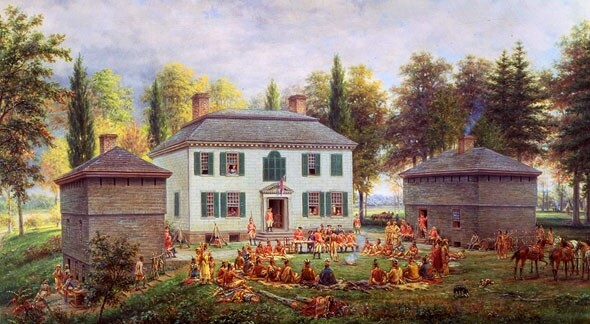 In 1772, Joseph Brant, along with 182 Indian warriors, received a silver medal for his services to the Crown.

During the American War of Independence Joseph Brant led the colonial loyalists and the Mohawk against the Patriots. He worked closely with his mentor, British Superintendent of Indian Affairs, Sir William Johnson. After Johnson died in 1774, Brant worked with Johnson’s nephew Guy Johnson. Guy Johnson took Joseph Brant to London in 1775. The Mohawk chief negotiated with the British government for a land grant in Quebec for the Iroquois people in return for their fighting the American revolutionaries.

Joseph Brant by George Romney. Painted in London in 1776

In England Joseph Brant was the subject of great curiosity. He was treated as a celebrity and, because he wore his native clothing whenever he went out on the street, he attracted the attention of crowds of on-lookers. He went to St.James’s Palace where he was granted an audience with King George III. He was taken to see the great sights of London and his portrait was painted by the artist George Romney. The exotic Indian chief who had been confirmed as an Anglican in North America was accepted into the Masonic Order and was given his ritual apron by the king.

By the summer of 1776, Joseph Brant was back in the American colonies and actively serving in the British forces as they attempted to put down the revolution. In the fall of 1776 he traveled to Iroquois communities to convince warriors to join the British in fighting against the Patriots. Although he did manage to raise a small troop of volunteers most of the Iroquois decided to remain neutral in the conflict between Britain and her American colonies.

When peace was declared in 1783 Joseph Brant participated in negotiations between the Americans and the British and their native allies. He pushed for and achieved a grant from the Governor of the colony of Quebec for the establishment of a Mohawk reserve on the Grand River in Ontario. Brant himself settled at the head of Lake Ontario (now Burlington) and built fine house and farmed with the help of servants and black slaves. In 1785 Chief Joseph Brant again traveled to London to convince King George III that the British should protect the loyal Indian confederacy from attacks by the Americans. He made a quick trip to Paris and returned to Canada in June 1786. As before wherever he went Joseph Brant attracted a great deal of attention. 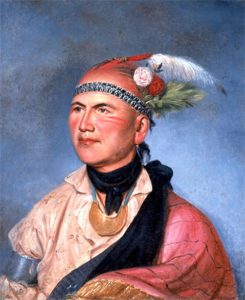 Joseph Brant continued to serve his people, traveling to Philadelphia to negotiate with the new American government, on behalf of the Iroquois who had chosen to remain in the United States. He died in 1807 at his home that still exists in Burlington.

By Alan McNairn and Hammerson Peters