In recent years Halifax’s Edward Cornwallis statue has been attacked by ninjas, doused in fake blood and given street-art gender reassignment surgery via a felt vagina (photo below).It’s a strange turn of fortunes for a man who for generations was quietly revered by many Nova Scotians as the founder of Halifax. Edward Cornwallis has been honored with schools, streets and the statue, but attitudes began to change in the 1990s, when Mi’kmaq historian Dan Paul started campaigning against the man who had issued the notorious scalping proclamations paying for the murder of Mi’kmaq people trying to drive them out of Nova Scotia. 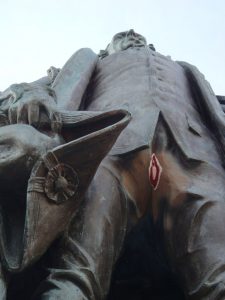 The 300th anniversary of Edward Cornwallis’s birth is in February, but no biography has yet been written of him. Curious how a man could be so controversial, yet so unknown. I decided to take matters into my pen and write his life story. It’s almost finished, and due out in time for his birthday. Here’s a sneak peek at my findings so far.

Edward Cornwallis was born Feb 22, 1713. His father was a baron, his mother a lady, and his twin brother Frederick went on to become the Archbishop of Canterbury. The twins grew up on Leicester Square in London – the same street as King George II. 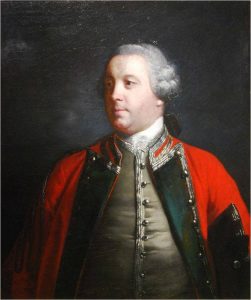 Edward Cornwallis joined the military and his first big test came in 1746 at the Battle of Culloden. Remembered in old and new Scotland alike as the massacre of Bonnie Prince Charlie’s Highland Army. After the victory, Cornwallis was dispatched into Scotland’s mountainous northern regions to carry out the Pacification. Cornwallis’s 320-man unit was famous for its violence as it marched through the rebel homelands chasing off livestock, burning villages and dismantling the clan system by force.

Anyone with a kilt, broadsword, crucifix, or anything vaguely hinting at rebel sympathies, was executed.

Cornwallis’s next assignment was to found Halifax in 1749. The land we today call Nova Scotia was then three places all at once. To the Mi’kmaq people, it was Mi’kma’ki, the collective name for the Seven Districts that comprised the main Mi’kmaq government in what is today Nova Scotia.  The others were New Brunswick, P.E.I. and parts of Maine. For France, it was Acadia. For Cornwallis and Britain, it was Nova Scotia – territory France ceded to Britain in 1712.

Halifax would offset the French fort at Louisbourg and set up British control of Nova Scotia. In his letters to the board of trade, Cornwallis outlines his plan to clear the province of Mi’kmaq people and reserve the land for Europeans. This led to years of war and the scalping proclamations.

From a British perspective, Cornwallis’s time in Nova Scotia was marked by success in establishing Halifax, and failures outside of the fortress walls. Streets were opened through the woods around the Grand Parade; Cornwallis’s own home was on this site. But the bloody war with the Mi’kmaq ultimately failed.  Cornwallis was unable to force them off the peninsula. He he struggled to expand British presence beyond Halifax and Annapolis. Halifax had a first-year budget of £39,000, but the war drove expenses to £170,000. Cornwallis was repeatedly warned against overspending.

When Edward Cornwallis sailed out of Halifax in 1752, he left a growing settlement that had homes, a court, a budding dockyard and St. Paul’s Church. From a Mi’kmaq perspective, he left a devastated population that would continue to suffer various forms of government violence for the next two centuries. For the Acadians, his tactic of bringing in “Foreign Protestants” to settle Nova Scotia paved the way for the Expulsion.

Back in Britain, Cornwallis resumed his military career. In 1756, he was ordered to relieve his regiment on the Mediterranean island of Minorca. The island was besieged by France. Cornwallis sailed to the rescue with Admiral John Byng, but their massive fleet turned for home after deciding the French were too well entrenched. Byng, Cornwallis and other leaders were arrested and faced court martial. Byng was found guilty of disobeying orders and executed – an event that shocked Europe. Cornwallis pulled in some favors and was acquitted.

His last post was to another Mediterranean island, Gibraltar, where he served as governor from 1762 until his death in 1776.

Today, he is little remembered outside of Nova Scotia. His name is a powerful word that provokes strong emotions cutting right to the core of the province’s existence. It seems after 300 years, we’re still not sure where we are: Mi’kma’ki, Acadia or Nova Scotia? Was Cornwallis the founder of Halifax, or an invader? Perhaps he’s both. Perhaps it’s the task of this generation to find a way to make this land home to all three places at once. 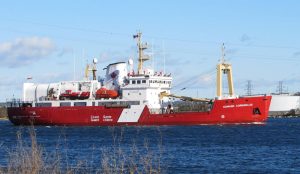 Jon Tattrie is a freelance journalist and writer based in Halifax, Canada. He writes features for Readers Digest, Canadian Geographic, Halifax Magazine, Progress, Atlantic Business Magazine, Atlantic Books Today and others. He is an online and broadcast journalist for CBC and reports for Metro Canada and the Chronicle Herald. His debut novel, Black Snow, was published by Pottersfield Press in April 2009. His first non-fiction book, The Hermit of Africville,was released in Africville on July 24, 2010. It won the Coast’s Best Book 2010 and was a finalist for the Democracy 250 Atlantic Book Award for Historical Writing. 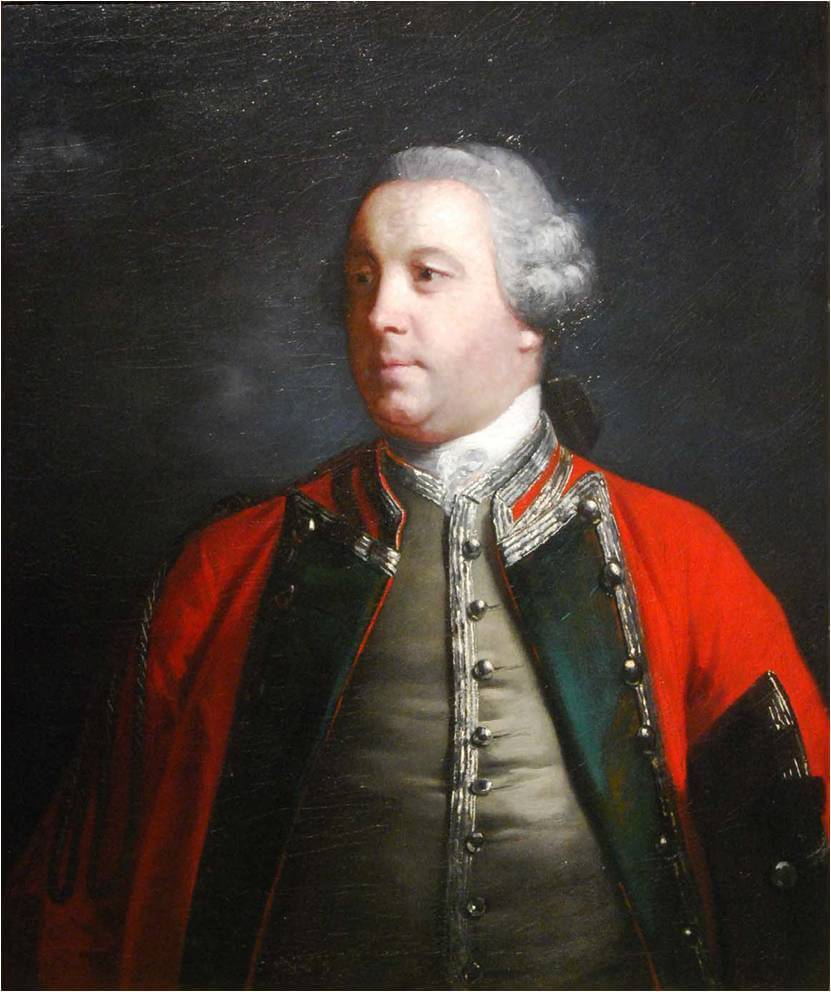 he slautered the scots .sold some into slavery.forced others into military service.including murdering the natives.so scots of ns should be first in line erasing that animals history.

leave history alone,what about the cape breton mic mac that went to nfld to kill all the natives ,they were hired by the nfld goverment.