Eyewitness in a Killer Storm – August gale of 1892

Many Nova Scotia ship wrecks were banking schooners. During exceptionally stormy weather conditions, it was not uncommon for these sail-powered vessels while fishing far from port to be overwhelmed. Several disappeared with the loss of all hands without any word of exactly what happened. Owners, relatives and loved ones remained in anxiety and distress for weeks until hope was finally abandoned. Had anyone seen or witnesses the ship in its final minutes? Had the crew fought in vain for their lives? What exactly had happened?
“Clues to a Mysterious Disappearance”

So it was for a LaHave schooner many years ago. One vessel Cashier, a schooner owned and operated out of LaHave in 1892, disappeared while on an August fishing voyage. To the Nova Scotian town, an ocean storm had claimed her with no survivors to tell the tale.  Yet, there was one man who saw Cashier in her final hours — a man who lived far away from LaHave and maybe had no opportunity to tell the tale to those left behind. Although the story is related indirectly, I feel it is vital to put Cashier’s story on paper; perhaps then some family questions may be resolved.
Several years ago Clyde Forsey, an elderly gentleman of Grand Bank, Newfoundland, told me how his father James, the master of the fishing vessel Mary F. Harris, survived the effects of a killer storm on the fishing banks. Two other schooners, one a Nova Scotian banker and the other from his home town, anchored near the Harris were lost. 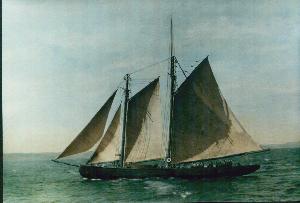 During the tail end of a tropical hurricane, which lashed the South Coast and the off shore banks in 1892 (later referred to as the August Gale of 1892), three fishing schooners were lying to in close proximity on the Grand Banks: the Nova Scotia schooner Cashier, Captain Alfred Reinhardt; and two banking schooners from Grand Bank, the seventy-one ton Mary F. Harris, Captain James Forsey; and the seventy-eight ton George Foote. The latter was a seventy-two foot vessel built six years before at Grand Bank and commanded by Captain Sam Patten.

A knowledge of weather lore gathered from years on the high seas led all three captains to believe that an intense gale was pending. As the wind rose to gale force later in the evening, each captain knew it was useless to attempt to sail for some sheltered harbour. Time was short. Knowing their only recourse was to ride out the storm, they anchored their schooners on the banks and battened down to weather out a gale with winds, at times, of hurricane force.

That night, during the high winds and mountainous waves, a worried Captain Forsey carefully made his way to the bow of Mary F. Harris. Gripping lifelines to keep from being swept off the deck, he sat on the windlass to check the straining anchor chain. Seas and wind ripping over the deck forced him to hold lifelines tightly to keep from being swept overboard. Unable to use his hands, he slipped off one boot and felt for vibrations on the cable or chain with his foot. Movement and play would indicate if the anchor dragged or held firm. Should it drag the vessel would be at the mercy of the wind and could easily capsize or collide with another schooner bringing death to all on board. Carefully nursed throughout the gale, Mary F. Harris stayed afloat through that long night.

After checking his own vessel Captain Forsey noted, as he looked through the driven spray, that the riding lights of one of the other vessels had disappeared. He was unable to identify which schooner, nor could he determine if the vessel in question had capsized or driven away.

At daybreak Forsey found the answer. Cashier, still lying at anchor, was partly submerged, waterlogged and swaying helplessly before the wind. There was no sign of life. The other schooner, George Foote, from his home town and with seventeen men — many of whom he knew well — was nowhere in sight. One fisherman on George Foote was Leonard Hartling, age forty and born in Liscomb, Nova Scotia, who was married to Mary (Patten) of Grand Bank. They had a child, Almira.

When wind and sea abated, Captain Forsey and another seaman  rowed over to the derelict hull of the Cashier, climbed aboard, but saw no one. Fearing a major sea disaster had taken place in the night, Forsey then put on a general search of the area for some indication of what had happened to the schooner George Foote and to the crew of the partially-submerged Cashier. If the crew of the latter had taken to lifeboats or the dories, Forsey knew they wouldn’t last long in the high seas. Later he discovered buoys, trawl tubs, broken dories, and other
floating debris clearly marked and identified as belonging to George Foote.

“Solution to the Mystery” This evidence led Forsey to believe both vessels had dragged anchor during the storm and collided with tragic results. He sadly concluded he would never see Captain Sam Patten nor his fellow townsmen again.  For Forsey and Mary F. Harris the fishing season ended quickly and unhappily and, since he sustained storm damage, he had to return to home port. There concerned relatives and the owners, Foote Brothers, anxiously awaited for the arrival or for news of George Foote.

Captain Forsey had the heartbreaking task of relating the fate of the schooner and all her crew. He had been the last person to see George Foote through the spume and high seas as she prepared like the Cashier, to beat the August gale of 1892. On September 26 a St. John’s newspaper reported, albeit with no crew list, the disaster on the Grand Banks:

“Besides the losses (already reported) from the effects of the storm, grave fears are entertained that George Foote of Grand Bank, Samuel Patten master, has been lost with all hands, comprising a crew of 17 men.

“Captain George Brett arrived here (St. John’s) a few days since, and reports having spoken to Captain James Forsey of Mary F. Harris, who said he was fishing in the same neighbourhood with George Foote and a Nova Scotian schooner and, when the storm was over, he saw the Nova Scotian at anchor, full of water with spars and sails gone.

“Near the same place he picked up a lot of wreckage, which evidently belonged to George Foote, and he came to the conclusion the two schooners collided, and the crews of both were drowned by the angry waves. But, as there is “hope from the sea”, their friends cling to the idea they may have escaped in their dories, or the schooner became dismasted and is still driving about the ocean, and they will be rescued by some passing vessel.

“More Solutions to the Mystery: Author’s Notes” While digging through archival papers some time after my initial conversation with Forsey, I located a reference to the loss of the LaHave schooner Cashier. News of Cashier’s wreck reached Nova Scotia in early September. By September 12, 1892, an article in the Halifax Herald reported Cashier had been lost with crew. ”

The one hundred seven ton Cashier, one of the finest vessels of the Nova Scotia fishing fleet, carried nineteen men. She was owned in LaHave by T.A. Wilson and Reinhardt Brothers and had been built in 1888 at Conquerall. Captain Reinhardt had previously captained the schooner Cletia which his brother Benjamin now commanded. Three of the captain’s brothers worked in LaHave; one was the collector of customs and two were in business.

Several of Cashier’s crew, many of whom lived in LaHave and area, were identified:

Needless to say the people of LaHave, West Dublin, and neighbouring towns were devastated at the news of the loss of Cashier and her entire crew. Once again a Nova Scotian town that sent a fleet of ships down to the sea had paid a heavy price for the riches of the ocean.

Article Name
Eyewitness in a Killer Storm - August gale of 1892
Description
Many Nova Scotia ship wrecks were banking schooners. During exceptionally stormy weather conditions,it was not uncommon for these vessels to be overwhelmed.
Author
Alan Parsons
Publisher Name
Mysteries of Canada