The following is a Plot Summary of Season 5, Episode 11 of the History Channel’s TV series The Curse of Oak Island. 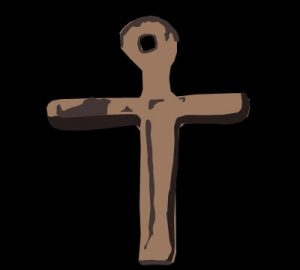 The episode begins in the War Room, where the Oak Island team, with Marty Lagina and Craig Tester in attendance via Skype, meets with Laird Niven. There, the archaeologist examines the small lead cross found on Smith’s Cove by Rick Lagina and Gary Drayton the previous episode, and declares that he has never seen anything like it before. He also states that the chain hole in the top of the cross was almost certainly made by a square nail. When prompted by Gary Drayton and Marty Lagina, Niven agrees the cross appears to have had little exposure to the air, as it displays only a small degree of oxidation, and that it was likely unintentionally unearthed the previous year, when the Oak Island team exposed what they believed to be a French drain beneath Smith’s Cove. He suggests that the team have the artifact appraised by an expert specializing in European antiquities. 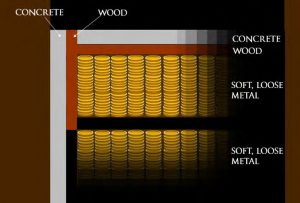 Two days later, Rick and Marty Lagina and Craig Tester meet with Vanessa Lucido at the H8 Shaft, where contractors are in the process of sinking a smaller inner caisson within the wider custom-built caisson first used to sink the shaft. At the same time, Jack Begley, Charles Barkhouse, and Gary Drayton sift through the last bit of H8 spoils at a wash table. Drayton quickly picks out a piece of pottery decorated with a raised floral pattern in a sample taken from a depth of 150 feet.

Shortly thereafter, Vanessa Lucido approaches the treasure hunters to inform them that their caisson appears to have encountered an underground void from the depths of 162-172 feet, evocative of the Chappell Vault. Mysteriously, the flat layer situated at a depth of 170 feet, which was encountered in the previous episode, is no longer there. Marty suggests that the flat layer might have slipped into a natural void below, which much of the treasure is believed by some to have slid into during the two 18th Century collapses of the Money Pit.

Later, Rick Lagina and Gary Drayton go metal detecting at Smith’s Cove. They quickly unearth what appears to be a lead spoon handle reminiscent of the recently-discovered lead cross. Later on, they uncover a strip of brass, which Drayton suggests was once part of a boat. 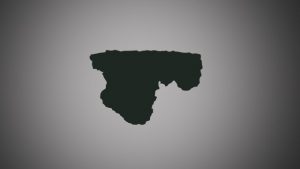 An interpretation of the small piece of leather found in Drillhole H8.

After their metal detecting excursion, Rick and Gary rejoin the rest of the team at the Money Pit area, where the excavation of H8 is still underway. At the wash table, where debris from H8 is sifted through, Gary Drayton and Jack Begley discover a piece of what appears to be leather brought up from a depth of 162 feet, reminiscent of the fragment of leather book binding discovered in Season 5, Episode 7. Shortly thereafter, they find a large piece of bone brought up from the same depth, evocative of the fragments of human bones found in the H8 spoils in Season 5, Episodes 5 and 6 (both of them found at a similar depth).

As the last few feet of H8 are excavated, the Oak Island crew members express their frustration that the shaft, which had initially seemed so promising, has yielded so little of interest. Marty Lagina summarizes the sentiments of the crew in a later interview, saying, “I can’t explain, in H8, how we got so many significant artifacts out of a small borehole- 6 inch borehole- and then we run a great big giant six-foot caisson down there and we get, really, marginally more. I don’t know why.”

After Marty’s aside, Vanessa Lucido of ROC Equipment Ltd. informs the treasure hunters that the caisson has hit bedrock, implying that the H8 shaft is complete. The Lagina brothers and Craig Tester, disappointed at the development, discuss the reasons for the shaft’s negligible productivity. Craig suggests that perhaps the caisson pushed the hypothetical treasure vault down or to the side during its descent.

That night, the crew meets in the War Room with geophysicist Mike West of GEMTEC Ltd., an Ontario-based engineering consulting company. West, who ran a dual induction device down each drillhole of the GeoTech grid in Season 5, Episode 6, shows the team a visual representation of the data he gathered, pointing out a cluster of data points which indicate, as Marty puts it in a later interview, “that there is a significant anomaly about 150 feet” deep in the area of the H8 shaft. The crew members agree that West’s information serves to verify that the original Money Pit is indeed located somewhere in the vicinity of H8.

The following day, the Oak Island crew meet in the War Room again, this time with geologist Terry Matheson and historian Doug Crowell. Marty Lagina informs the crew that they must decide whether to sink another shaft in the Money Pit area or leave the island for the season. Crowell opines that the crew ought to explore an area south of the H8 shaft, where the team has not yet drilled.

While the crew members discuss their next course of action, Craig Tester declares that he will leave the decision-making up to the other treasure hunters, disclosing that he will not be returning to Oak Island the following season. In a later interview, the engineer states that the Oak Island quest has helped “to take [his] focus off losing [his son] Drake,” who passed away the previous summer due to complications resultant of an epileptic seizure. Although Tester does not explicitly state the reasons behind his decision to take a break from the treasure hunt, it is strongly implied that they have something do to with the loss of his son.

The crew members agree to carry on the search in Tester’s absence, and decide to sink another shaft at a particular site which Rick Lagina, Doug Crowell, and Charles Barkhouse all agree is suitable. At Jack Begley’s insistence, the team decides to name the shaft after Drake Tester, dubbing it “DMT”- Drake Maxwell Tester’s initials.