The Curse of Oak Island- Season 7, Episode 18: The Turning Point

The Curse of Oak Island- Season 7, Episode 18: The Turning Point

The following is a plot summary and analysis of Season 7, Episode 18 of the History Channel’s TV series The Curse of Oak Island.

The Lagina brothers and Dave Blankenship stand by as Irving Equipment Ltd. and ROC Equipment deliver 8-foot-wide caissons, an oscillator, and a crane to Oak Island. The trio meets with Vanessa Lucido, Jared Busby and Danny Smith, who inform them that they have brought 210 feet of caisson to Oak Island, and will be able to 202-foot-deep shafts. 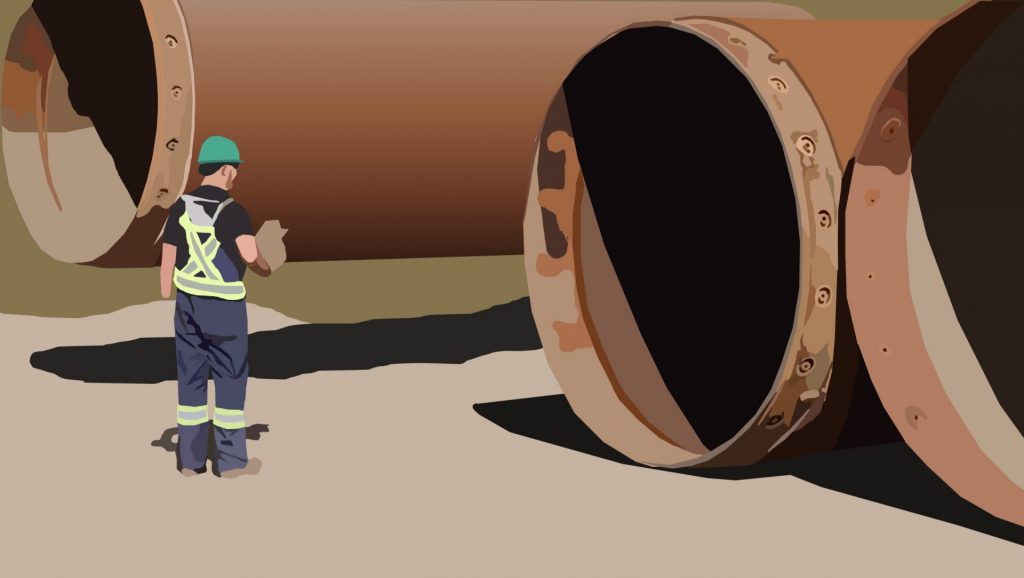 An interpretation of the 8-foot-wide caissons brought to Oak Island.

While ROC and Irving set up their equipment in the Money Pit area, Rick Lagina, Gary Drayton, Steve Guptill, and Dr. Ian Spooner resume their excavations at the Eye of the Swamp. Dr. Spooner, who has been examining the geological makeup of the dig site with a trowel, shows Rick a sample of material he extracted from beneath one of the boulders uncovered in Season 7, Episode 16, and sites it as proof that the boulders constitute relatively recent additions to the swamp. While the dig resumes, Spooner informs Rick that the vibracore samples of the Eye of the Swamp which he and his graduate students extracted in Season 7, Episode 9 contained high concentrations of mercury and lead near their bottoms, which he takes as an indication of human activity. In a later interview, Rick Lagina remarks that the presence of mercury in the swamp evokes Petter Amundsen’s theory that Francis Bacon is the man behind the Oak Island mystery, and that the lost manuscripts of William Shakespeare, written in Bacon’s hand and preserved in mercury, lie buried on Oak Island. Although the show fails to mention it, Spooner’s disclosure also brings to mind the lump of scrap lead which Gray Drayton discovered in Season 7, Episode 16, on the beach of Oak Island’s Lot 18, which Dr. Chris McFarlane, in the previous episode, revealed contains a significant quantity of mercury. 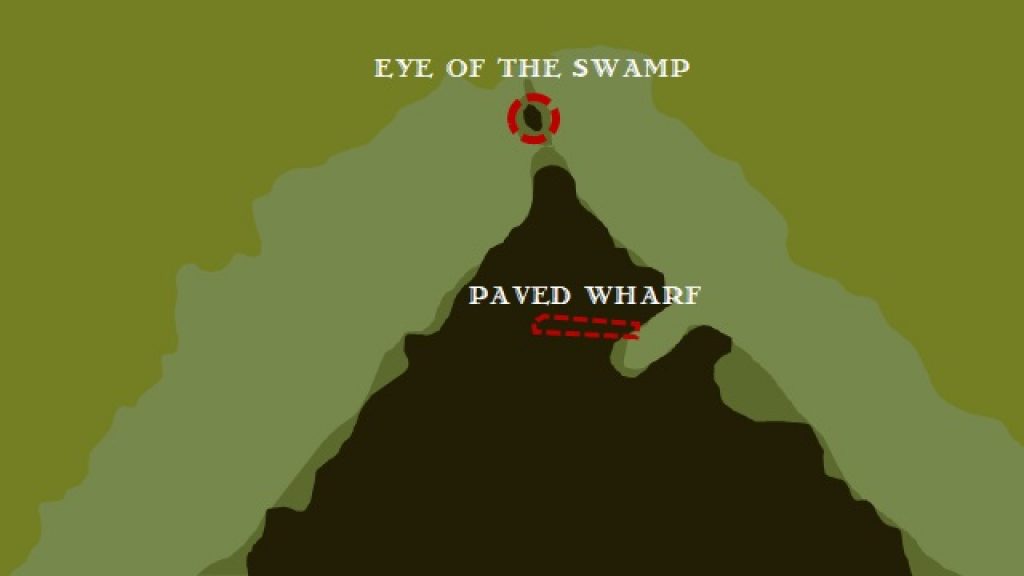 An interpretation of the Eye of the Swamp and the Paved Wharf on Oak Island.

The next day, the Oak Island team meets at the swamp with archaeologist Aaron Taylor, a colleague of Dr. Spooner’s who teaches archaeology at St. Mary’s University in Halifax. Taylor examines some of the stones in the swamp and opines that they were not deposited by glaciers. “In archaeology,” he says, “we have an expression: ‘when in doubt, excavate’”. He then suggests that the crew subject a section of the swamp’s stone formations to a formal archaeological excavation. When pressed by Marty Lagina, he admits that he believes the stones were placed by man.

Following Aaron Taylor’s preliminary analysis, Dr. Spooner proffers his own theory that the Eye of the Swamp constitutes the remains of a 300-year-old clay mine, considering the significant quantities of blue clay which Jack Begley discovered at the site in Season 7, Episode 16. Taylor concurs with his theory and elaborates on it by suggesting that, if the Eye of the Swamp is indeed the site of a clay mine, the Paved Wharf might have been constructed as a roadway by which clay could be transported from the mine to the beach, where it could be loaded onto ships.

That evening, the Fellowship of the Dig congregates in the Mug & Anchor Pub in Mahone Bay, Nova Scotia. There, the treasure hunters discuss Ian Spooner and Aaron Taylor’s theory that the Eye of the Swamp is the site of an old blue clay mine. Rick Lagina concludes the meeting with the toast: “To the swamp!”, to which Marty Lagina, who has made no secret of his aversion to the swamp, refuses to raise his glass.

The next day, Rick Lagina, Doug Crowell, and Steve Guptill meet with Vanessa Lucido and Mike Jardine at the Money Pit area. The narrator informs us that the team plans to sink a caisson at a site dubbed ‘OC1’. While the oscillator is moved into position, Lucido remarks that this custom-built piece of machinery weighs 110,000 pounds- nearly double the weight of the oscillator used in prior seasons, which weighed 64,000 pounds.

Later that day, Rick Lagina, Jack Begley, Gary Drayton, and Billy Gerhardt excavate the edges of the Paved Wharf in the hopes of better determining the extent of the structure. The treasure hunters observe a rapid influx of water into one of the trenches they dig and speculate as to the water’s sources, of which there appear to be two. Jack notes that some of the water appears to be issuing from a cluster of rocks, which he suggests might be part of the Paved Area. “It’s very simple,” says Rick in a later interview. “If you have a pile of rocks, water will flow through, certainly. Was it a way to conduct water from one area to another? It’s possible. It’d be great if it were a French drain [Season 4, Episode 13] or part of the flood tunnel system, but as of yet, we have not been able to ascertain its purpose.” The treasure hunters are soon joined by Craig Tester, who observes that some of the water appears to be flowing into the trench from the direction of the beach, and suggests that they ought to try to take samples of each apparent water source in order to determine whether they are fresh or salty. Billy extracts some of the water with the bucket of his excavator, the runoff from which Rick collects in a bottle and tastes. Rick declares that the water tastes brackish- an indication that one of the water sources might be Smith’s Cove. 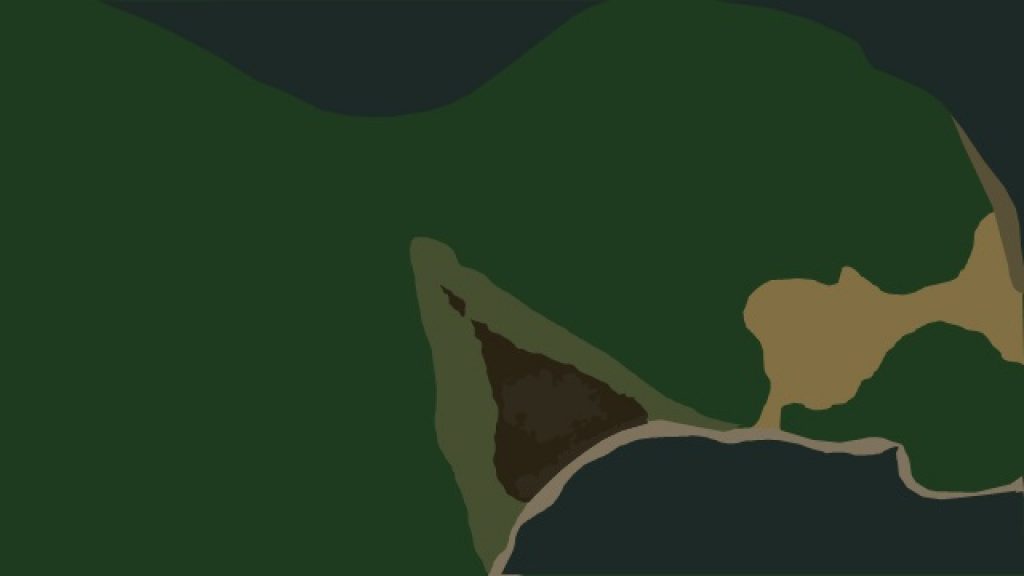 An interpretation of the Oak Island swamp.

The next day, Charles Barkhouse, Doug Crowell, and Laird Niven meet with GPR experts Steve Watson and Don Johnston at Oak Island’s Lot 25, where Samuel Ball’s home once stood. The narrator informs us that, although the foundation of Ball’s cabin is a protected heritage site, and that treasure hunters are precluded from excavating within 200 feet of the ruins, Laird Niven has secured a special permit to allow Watson and Johnston to conduct a GPR scan of the area. 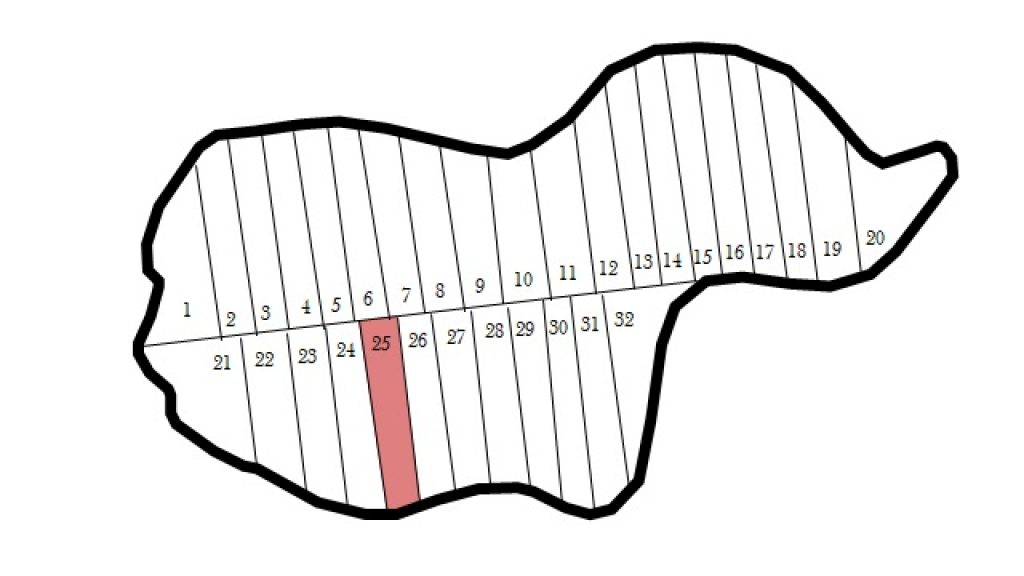 As the GPR experts prepare to carry out their scan, Rick Lagina shows Ian Spooner the recently-dug trench in the Oak Island swamp which appears to be fed by multiple sources of water. Rick and Dr. Spooner watch as Billy Gerhardt drains the trench, which is now full of water, with his backhoe.

Back on Lot 25, Steve Watson and Don Johnston discover what appear to be underground wall near the Ball foundations with their GPR scanner. Shortly thereafter, they come across another anomaly which appears to lie 1.5 feet below the surface. When the GPR experts complete their survey, Laird Niven states that he thinks they now have sufficient data to apply for an excavation permit from the Nova Scotian government.

Later, Rick Lagina, Dan Henskee, and Dave Blankenship drive to the Money Pit area, where they find the rest of the crew in attendance. The treasure hunters stand by while Dave Blankenship and Dan Hensee start up the oscillator which is now in place, initiating the sinking of the massive caisson dubbed ‘OC1’.

The Clay Mine Theory

In this episode, Dr. Ian Spooner put forth the theory that the Eye of the Swamp might constitute the remains of a 300-year-old clay mine, considering the significant quantities of blue clay which Jack Begley discovered at the site in Season 7, Episode 16. His colleague, Aaron Taylor, who teaches archaeology at St. Mary’s University in Halifax, concurred with his assessment. 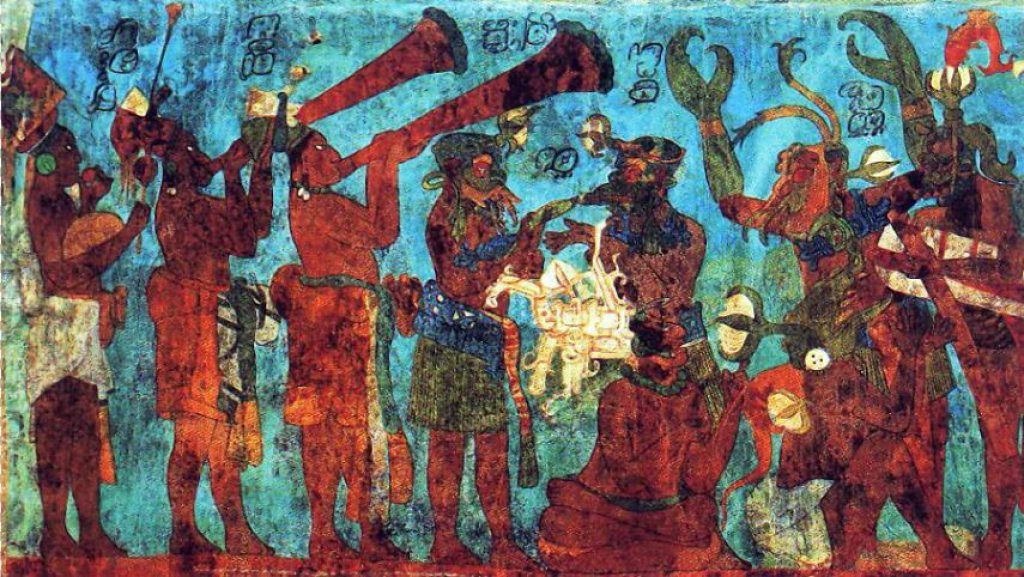 Dr. Spooner is not the first to hypothesize that Oak Island was once the site of a clay mine. Back in Season 3, Episode 6, miner John O’Brien outlined his own theory that pre-Conquista Mayans discovered palygorskite clay on Oak Island in around 800 A.D. Palygorskite is a rare type of clay arguably most famous for being a key constituent of Maya blue, a bright blue pigment used by members of the Maya civilization. Essentially a mixture of palygorskite and indigo dye, Maya blue was employed as a colorant in ceramics, murals, sculptures, and illuminated codices, and was used to paint sacrificial human victims during Mayan rituals. Mysteriously, palygorkite clay is not known to exist in any substantial natural deposits in Mesoamerica. John O’Brien believes that the “blue clay” discovered at depth on Oak Island over the years is, in fact, a rare form of naturally blue palygorskite clay. He maintains that this substance, having a natural blue pigmentation, would have been especially valuable to the Maya. O’Brien contents that Maya miners sank shafts on and dug tunnels beneath Oak Island throughout the Middle Ages in search of this material. He also believes that, during the Conquista of Hernan Cortes, members of the dying Aztec Empire secreted their most valuable treasures out of Mexico and entombed them on Oak Island, in the old Mayan mine shafts.