One of the best known “ghost ships”, the Mary Celeste, was built at Spencer’s Island, Nova Scotia. It was found abandoned in 1872 in the Atlantic Ocean off the coast of Portugal. Her crew and her lifeboat were missing. Her sails were set. She was seaworthy and there was a 6 month supply of food and water on board. Most of the ships papers, the sextant and the chronometer had disappeared. The mystery of what happened to the Mary Celeste has never been solved. 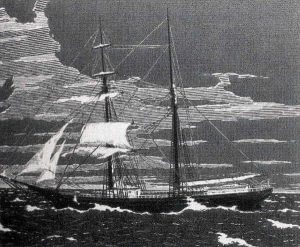 The brigantine Mary Celeste was built by the shipbuilder Joshua Dewis in 1861. It was christened the Amazon and registered at Parrsboro, Nova Scotia. The first owners of the vessel encountered disasters right from her maiden voyage when the Captain Robert McLellan, a son of one of the shareholders, died of pneumonia after only 9 days at sea. Under a new captain the Amazon collided with a fishing boat and had to be repaired in a shipyard. While being patched-up a fire broke out amidships necessitating further repairs. During the 6 years she was operated from Canada the Amazon returned a healthy profit to her owners however on her first Atlantic crossing she hit another boat in the English Chanel and required further repairs.

After running aground off Cape Breton Island in 1867, the Amazon was sold to an American owner who rebuilt the vessel and had her re-registered in New York as the Mary Celeste. After several uneventful voyages, in November 1872 she was loaded in New York with 1701 barrels of alcohol destined for Genoa, Italy. The night before she sailed her captain, Benjamin Briggs, had supper with a Canadian friend David Reed, captain of the brigantine Dei Gratia. They discussed their immanent transatlantic voyages to their common destination, Genoa. 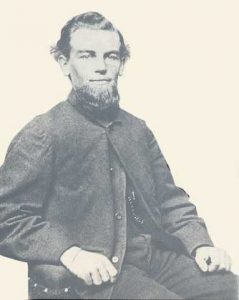 The Mary Celeste sailed from New York and 7 days later the Dei Gratia left port. On 4 December 1872, a mate aboard the Dei Gratia sighted the Mary Celeste. On investigation it was found that all the crew and Captain Brigs and his wife and young daughter were missing. Nothing seems to have been stolen from the vessel which was still moving under full sail. Some of Dei Gratia’s crew took charge of the ghost ship and sailed her to Gibraltar.

An investigation as to the fate of the crew of the Mary Celeste was held in the British port of Gibraltar and several explanations as to what happened aboard the ghost ship were proposed. Among the most likely of them, was that fumes of alcohol escaping from a broken barrel caused the ship to be abandoned and the crew and the captain’s wife and daughter perished at sea in the lifeboat.

Salvage rights to the Mary Celeste were acquired by an American ship owner James Winchester. But the curse of the vessel still had punch as Winchester’s father while aboard the Mary Celeste on her return to America drowned in an accident in Boston Harbor. Winchester sold the cursed brigantine and over the next 13 years she had 17 different owners.

The last owner of the Mary Celeste was an unscrupulous merchant, Captain G.C. Parker. After insuring his cargo for many times its value he purposefully sailed the Mary Celeste onto a reef off Haiti. The ship didn’t sink so he attempted to set her on fire. This act was unsuccessful and Parker was tried for the crime of intentionally destroying his ship. He escaped being hanged for the offense but had to face a loss as the insurance companies failed to pay his fraudulent claim.

It was unprofitable to attempt to salvage of the charred hulk of the Mary Celeste and she was allowed to slide off the reef into the sea. In 2001 a team of Canadian divers found the underwater remains of the Mary Celeste off Port-au-Prince, Haiti. However, as with everything connected with this ship, another mystery arose. An American scientist studying the wood from the wreck concluded that it was too recent to be from the Mary Celeste.

The fate of the Mary Celeste continues to be a mystery.