German U-190 and the HMCS Esquimalt

The U-190, launched in Germany on 3 June 1942.  It left Germany on its first working patrol on 20 February 1943, returning to its base at Lorient, France on 30 March. Thereafter it made a total of six working cruises into the Atlantic before surrendering on the last of these to the Royal Canadian Navy on 11 May 1945.

The U-190 does not seem to have been all that successful, during the first five of its cruises it sank only one allied vessel – the 7015 ton cargo ship Empire Lakeland on 8 March 1943. It fired torpedoes on a number of other occasions, but without result. It was to have one other success on the last of its cruises, and this was to bring it firmly within the context of Canadian naval history.

U-190 left a base in Norway on its sixth and last mission on 22 February 1945. Armed with 6 contact torpedoes and eight T-5 Gnat acoustic torpedoes, it mission was to interdict allied shipping off Sable Island and the approaches to Halifax harbour.  It was part of new strategy for the commander-in-chief of the German Navy, Admiral Karl Dönitz, initiated in the dying days of the Nazi regime, to increase pressure on shipping in North American waters trying to ease allied naval pressure in waters closer to home.

Early on the morning of April 16 the Boat was sitting in a favorite spot off the Sambro light ship when a pinging on the hull indicated that her place was being picked up by asdic signals from a vessel on the surface. The ASDIC was in fact aboard the Canadian Bangor class minesweeper, HMCS Esquimault, engaged in carrying out a routine patrol of the area. Perhaps lulled into a sense of ease by the news of the eminent German collapse in Europe, she was observing none of the standard security measures that were mandatory for vessels operating in these waters. She was not zigzagging as required, she was not streaming her Canadian-designed Cat gear, developed specifically to deflect attacks from German Gnat Torpedoes, and she had even turned off her (admittedly obsolete) radar. And no-one on board seemed aware that the ASDIC had in fact picked up a contact. Below the waters the crew of U-190 was sure that their location was found. And when the Esquimault suddenly turned towards them and headed directly towards their periscope they though an attack was made. The U190 swung about and fired off one Gnat torpedo from a stern tube, expecting that it fired too close to have any effect, as they desperately attempted to get clear of the perceived danger.

The torpedo in fact hit home, tearing into the Esquimault’s starboard side. She immediately began to list to starboard and sank within four minutes. She was the last Canadian vessel lost due to enemy action in the Second World War.  While eight of Esquimault’s crew probably went down with her, the rest escaped and managed to get into Carley floats on the water. Its sinking was so rapid, however, that there was no time to send out distress signals, so that it was hours before anyone realized what had happened and after eight hours later that HMCS Sarnia first came across any survivors. During this period a total of 44 had died of exposure, and only 26 remained alive.

After its meeting with the Esquimault, U-190 successfully escaped the area and remained on patrol off the Canadian coast until instructions were received from Dönitz to surrender on 8 May. The boat was finally intercepted by Canadian corvettes 500 miles of Cape Race in Newfoundland on 11 May. Within hours her captain signed a document of unconditional surrender. With the white ensign flying from her masthead, she sailed under Canadian escort into Bay Bulls, Newfoundland, on 14 May. The crews were then taken as prisoners to Halifax.

When the U-190 surrendered in May 1945, the senior officers included: Lt Werner Muller, 22 years old, and Lt Ernst Glenk, 21 years old, both veterans of three years in the U-boat fleet. 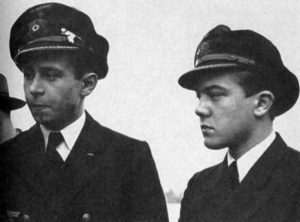 The Post War Story of the U190 continues here.

German U-190 and the HMCS Esquimalt was last modified: February 9th, 2017 by Bruce Ricketts

One Response to “German U-190 and the HMCS Esquimalt”

I’d say the mystery of the U190 is why she and her crews led such a charmed life?

We’ve all heard of jinxed ships but the U190 seems to be the one that got a charmed life thanks to the powers that be.As I recall she had 5 patrols before this final sixth one and at one point lay helpless on the surface off Halifax harbour for 2 hours without being detected.Theres also the tales of the captured U190 crew with Halifax streetcar passes,Canadin cigarettes and photographs of their Canadian girlfriends.

Just what did you do during the war Daddy?