When I was a kid growing up on the airbase at Trenton, we used to take day trips to buy shoes.  We would go north from Trenton to Batawa, the site of the first company town (outside of an airbase) that I had ever seen.

BATAWA HISTORY – (from http://www.bata.it) – In 1939, accompanied by 100 Czech families, Thomas J. Bata emigrated from Czechoslovakia to Canada.  He was the only son of Tomas Bata who had built a very, large, international shoe enterprise in Czechoslovakia and died in an airplane crash before the Second World War. Young Thomas decided to leave his home country a short period before the German Army marched in.  After his arrival in Canada he initially bought an old paper mill in Frankford and started to manufacture shoes with the help of over 100 Czech families who had followed him to Canada. 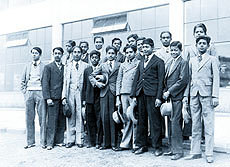 Soon after their arrival they started to build a new factory and housing in Batawa. There were two schools, two churches and sports facilities.  At a later date a Post Office and a bank were added.  Originally most of the inhabitants of Batawa were of Czech origin and retained many of their traditions.

In addition to the shoe factory, they also built a plant to make shoe machinery.  However, during wartime the engineering plant concentrated on the war effort.  They made various high precision machine parts such as gyroscopes for the armed forces. By 1989, the Bata factory employed 1,500 in the shoe factory and 380 in the engineering division.  It was a truly flourishing community. The wartime housing, which had been subsidized by the Bata Shoe Company, was replaced by well built bungalows and owned by the occupants.

In the years to come the engineering division was sold to Invar, one of the Linamar companies making automotive parts.  It remains active today, employing more than 450 people.  Gradually the shoe factory reduced its production.  Labor costs in Canada were very high and more and more shoes were being imported, particularly from China.  By the time the factory closed, the residents of Batawa found other careers but many remain in their homes in the village, keeping the spirit of a small town strong.

Many in surrounding communities still have connections with the original Czech families.  There is a large group of “Batawa Kids” – people who were born in Batawa and today live all over the world – who still support a strong sense of kinship to Batawa.

So Batawa is no more?  Think again.

The determination of the residents of current day Batawa has kept the town alive by attracting new business and people.  The town is a shell of its former self but it is working hard.

Although the Bata Shoe plant is closed they still have a foundation in shows with the local Batawa Sidney Shoe Machinery company, who make shoe making equipment.

Just outside Batawa, you will find a geologic anomaly.  There is a very large rock sitting in the wood to the west of the main road (Hwy 33) leading to town.  It is called an erratic.  It was deposited by a receding glacier thousands of years ago.  It is a bit of a hike from the parking lot by worth the walk.

The main building of the Bata Shoe Company is still not occupied.  Maybe it should be! 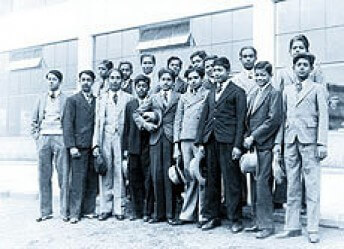 My first ever real job was at Bata Shoes in Batawa. We made “skidoo” boots and running shoes when I was there. Must have been late 60s early 70s. I quit after my first daughter was born in Feb 1972. So probably summer to fall of 1972