The Battle of the Windmill – Prescott Ontario

The lighthouse at Windmill Point in Prescott, Ontario wasn’t always a lighthouse. Built in the 1820’s, the lighthouse was originally a windmill. And it has its place Canadian history also. 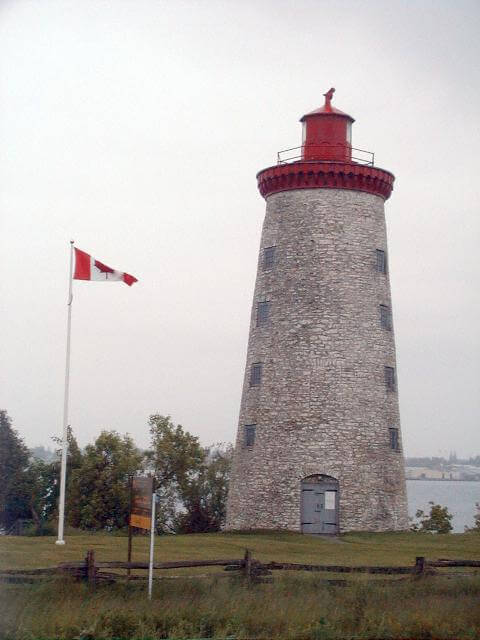 During the 1820’s and 1830’s, the British colony of Canada was governed by a small ruling elite. Reformers of the period began to demand a more broadly based democratic form of government for Canada. In 1837, these demands led to open rebellion on the part of the reformers, who were soundly defeated by the British army.

Some of these reformers fled to the United States.

In 1838, the rebels and some American sympathizers gathered arms on the American side of the St. Lawrence River, and on November 12th landed 190 men in Prescott. The invaders took control of the Prescott windmill and the surrounding buildings. The invaders expected the local populace to come over to their side, but this did not occur. In a matter of days the windmill was besieged by 2000 British troops and local militia, gathered in nearby Fort Wellington, with artillery and naval support. The rebels surrendered on November 16th. Eleven were executed, and 60 were exiled to Australia.

After the battle, the windmill served as a military post. In 1872, the windmill was converted to a lighthouse. The lighthouse served until 1978. Today, Windmill Point and Fort Wellington are preserved as historic sites by the Canadian Park Service.

An interesting footnote to this story is that Nils Szoltevcky, a Polish adventurer and former member of the French Foreign Legion,  was a mercenary member of the American force which fought at the Battle of the Windmill.  He was tried by Canada for breaking an “anti-mayhem” law as a result of his capture.  The Lawyer for the defense was none other than our first Prime Minister, Sir John A. MacDonald.  He lost that case and Szoltevcky as executed.

The Battle of the Windmill – Prescott Ontario was last modified: January 27th, 2016 by Bruce Ricketts
Summary

Article Name
The Battle of the Windmill - Prescott Ontario
Description
The lighthouse at Windmill Point in Prescott, Ontario wasn't always a lighthouse. Built in the 1820's, the lighthouse was originally a windmill.
Author
Bruce Ricketts
Publisher Name
Mysteries of Canada