What does an axe handle have to do with General Motors of Canada? General Motors of Canada builds cars, don’t they?  They have always built cars, haven’t they?General Motors Corporation, a US entity based in Detroit, traces its history back to 1897 when Olds Motor  Company was set up by Ransom Olds and began to produce the Oldsmobile.  Since then they have grown, through acquisition and partnership, to become the world’s largest automobile company with over 362,000 employees and over $175 billion (US) in sales volume.

General Motors of Canada, a subsidiary of GMC, can trace its roots back 1867 and a small farm at Tyrone, Ontario.  The farmer there made axe handles!

Robert McLaughlin had his roots in Cavan County, Ontario (now the Peterborough area).  By the mid 1800’s he had been “lured” to the Darlington area of Ontario with the promise of free farm land.  To clear his farm, McLaughlin built handles for his axes.  To supplement his income he sold some handles at the local market.  The handles went over well with the neighbors.  In 1867 or so, McLaughlin built himself a horse carriage.  So good was his design and craftsmanship that the neighbors, who liked his axe handles, asked him to build carriages for them. 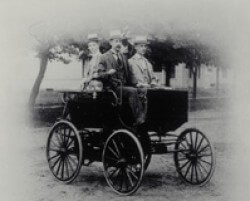 As knowledge of quality of McLaughlin’s carriage spread, the more he was called upon to build.  Between 1867 and 1901, McLaughlin had moved to Oshawa, Ontario and expanded his operation so much that he had to give it a name.  By 1901 the McLaughlin Carriage Company was born.  The company was owned by McLaughlin and two of his three sons.  Sons, Sam and George were his partners.

1901 would prove a crucial turning point for Sam McLaughlin when he and his brother were given a drive in the carriage company bookkeeper’s new automobile.  Sam was enthusiastic over the technology and tried to talk his father into investing in the production of these horseless carriages.  Robert was not so forward thinking as his sons, saying that these contraptions were noisy, smelly and dangerous and were a “passing fad”.

Sam, not to be discouraged by his father, by 1907, had test driven a number of these “passing fads” and decided that he wanted to build the Buick in Canada.  Robert reluctantly agreed.  Sam approached his friend Bill Durant who was a partner in Buick Motor Company in the US.  Bill met with Sam in Oshawa and penned a three page agreement (take note all you verbose lawyers!) which allowed Sam to build the “McLaughlin” with Buick motors.  Thus was the birth of the McLaughlin Motor Car Company.

McLaughlin built 154 cars in his first year of production, 1908 and they sold quickly.  However sales dropped off in the second year prompting the change of name to the McLaughlin Buick.  (Durant wanted to call it just Buick, but Sam refused.)

By 1908, Durant, was head of an amalgamation of Buick and Oldsmobile under the banner of General Motors.  In 1910, Durant was ousted from GM only to return to control in 1915.  One of his first actions, upon his return, was to plan for a new Chevrolet factory in Canada.  Not one to forget his friends, he asked McLaughlin to make his Chevrolet’s alongside their Buicks.  The GM Canada web site describes it this way:
“One day while visiting New York, at lunch with Durant and a Chevrolet stockholder, Sam casually asked how the Canadian (Chevrolet) project was going.  “Why don’t you give it to the McLaughlin Boys, Billy?” piped in the stockholder.  “Well, Sam, do you want it?” asked Durant.  In two days Durant and the McLaughlin had reached a deal.”

Reluctantly Robert gave in to the logic of time and closed his carriage facility to allow the manufacture of the Sam McLaughlin-designed Chevrolet’s in the Oshawa plant.

The McLaughlin Motor Car Company grew and prospered until it had grown so complex that in 1918 it was bought by the General Motors and renamed General Motors of Canada under the direction of its first President Sam McLaughlin.  Sam remained as president until 1945.

Sam never forgot that the people made him a success.  He made a return to them through his Foundation and Trust funds.

Separate from both the Trust and the Foundation, there were also significant gifts that came personally from Colonel Sam. Among them:

Born in 1871, Sam McLaughlin, the father of the Canadian automobile industry, died at the age of 100 in Oshawa, Ontario, less than an hour drive from the site of his father’s farm, where, what would eventually become know as General Motors of Canada, built axe handles.