In Toronto stands a The Gibraltar Point Lighthouse, that very well may be haunted. If you are a ghost hunting buff and love historical mysteries then the Gibraltar Point Lighthouse is a place not to forget. There are many different versions of the story told in and around the area.  One was about the first lighthouse keeper, J.P. Rademuller, who suddenly vanished. Rademuller was the lighthouse keeper from the time it opened in 1808 until seven years later in 1815.

There are many scary tales circulating about Rademullers ghost, haunting the lighthouse. For years his disappearance went unsolved. Two men that were said to have visited Rademulleron a cold night in 1815 were eventually arrested as suspects in his vanishing. As Rademuller was locally famous for his homemade bootleg beer, it was thought that the two men were there looking for a taste of the delicious brew. Unfortunately, They were never convicted because they didn’t confess, and at the time there was no body, which meant that Rademuller may not have even been dead. He could have just left, never to return.

Ironically the mystery was solved in the late 1800’s. Strangely enough, the lighthouse keeper that followed Rademuller found a part of a coffin and a jaw bone belonging to Rademuller. This finally confirmed the suspicions of Rademuller being killed by the two previously arrested and released men.

The lighthouse has an air of mystique surrounding it and is an attraction that should not be skipped or missed when visiting the Toronto area. Much care has been taken to keep the lighthouse looking as it did when it was built. Georgian architecture made for sturdy yet beautiful buildings, and the lighthouse is no exception.

The lighthouse is accessible to tourists on Saturdays and Sundays. Take a nice ferry ride out to the island, and maybe you will see our friend John Paul Rademuller climbing towards the top of the lighthouse he once guarded. After walking up its 90 steps, you will have a bird’s eye view of downtown and of course over one of the Great Lakes, which is a sight not easily forgotten.

The lighthouse stands about 100 meters inland these days, as over time, sand has built up around and in front of it. Still, once atop its 82 feet, a breathtaking view is awaits you. The Gibraltar Lighthouse, with its mysterious history,  is both a haunting and beautiful place to visit. 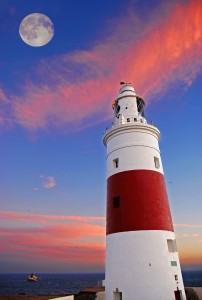