The HMS Nancy was built as a private cargo vessel in 1789 near Windsor, Ontario.  During the War of 1812, she was contracted into service and played an important role as a British supply ship.  Commanded by a British Naval Officer Lieutenant Commander Worsley for a brief period in 1814, the ship was referred to as “HMS Schooner Nancy”.In September 1813, the Battle of Put-in-Bay on Lake Erie allowed the traditional British supply route to the Upper Great Lakes to fall under American control and left the Nancy as the sole surviving British ship on the Upper Lakes. Unknown to the Americans, the British immediately chose the Nottawasaga River as their new supply route. This was a partially overland route from York (Toronto) north to the Holland River. From Lake Simcoe to Lake Huron the route was once used by Indians for generations. It was on the Nottawasaga River that the Nancy then received and transported supplies to the British garrison at Fort Mackinac, between Lakes Huron and Michigan. 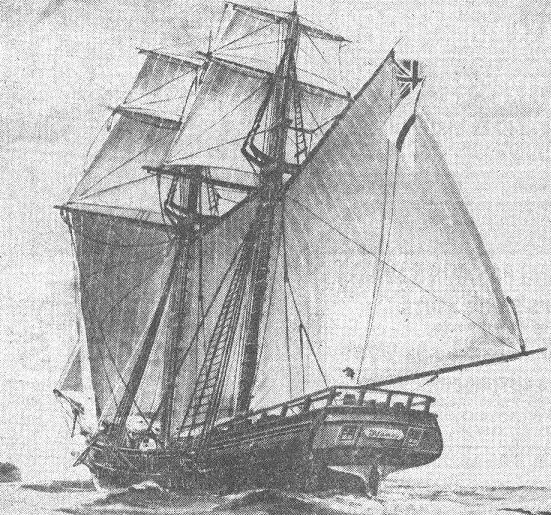 American forces soon learned of this new British supply route and made plans to capture the Nancy. A 360 mile canoe trip was made from Fort Mackinac to the Nottawasaga River by a British scout, Lieutenant Livingston with a message warning Lieutenant Commander Worsley to hide the Nancy up river away from the approaching Americans. However, on August 14, 1814, three American ships discovered the Nancy. Despite a courageous battle by Worsley and Livingston, 22 seamen, 23 Indians and 9 French Canadians voyageurs, against some 500 American men, the Nancy was set afire and sunk into the depths of the Nottawasaga River.

With her destruction the American forces hoped to starve the northern garrison at Fort Mackinac into surrender and gain control of the much desired Upper Great Lakes.

The charred hull of the schooner Nancy formed an obstruction in the Nottawasaga River collecting sand and silt over 114 years, and aided in the formation of Nancy Island.

You might think that the sinking of the HMS Nancy was the end of the story, but you would be wrong.

Worsley abandoned the Nancy when all appeared lost and hid the ship’s boats upstream on the Nottawasaga until the smoke cleared.  They then commenced to row the distance of 360 miles up Lake Huron to Fort Mackinac.  There they got help from the British garrison.  A few nights later, they boarded two of the U.S. ships, the Tigress and Scorpion, that had sunk the Nancy, captured them and used to them to re-establish British naval strength on Lake Huron.  This action allowed the British to regain control of this vital route, hastening the end of the war and the signing of the Treaty of Ghent in 1814.