Jumbo The Elephant was an African elephant, born in 1861 in the French Sudan.  He was exported to France in 1863 and then to London Zoo in 1865, where he became famous for giving rides to visitors.  Jumbo’s name is from a Swahili word, jumbe, which means “chief.”  Unfortunately, Jumbo grew bored in London and began to “act up”. 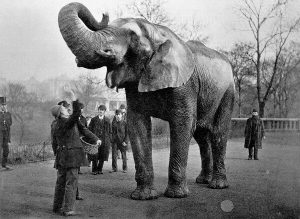 Jumbo was sold by the London Zoo in 1882 to the “The Greatest Show on Earth” – the Barnum & Bailey Circus, for $10,000 and shipped to New York City.  In New York, the ship was met by thousands of onlookers who wanted to catch a glimpse of the 12 foot high “monster”.  He was big, but not a monster.  Jumbo became very even tempered in New York.  He became the headliner of the B&B Circus and was featured on most of the Circus’ posters.

Jumbo The Elephant was transported from venue to venue around the US and Canada in a specially built carriage.  The six ton Jumbo was accompanied by his handler, Matthew Scott.

A guy went into a restaurant in St Thomas, Ontario on September 15, 1885.  He passed a sign that said that anyone who can order a sandwich that the restaurant cannot supply will get $1000.  He sits down, thinking this could be the easiest money he has ever made, and without even looking at the menu, he asks the waiter for an “Elephant Ear on Rye Sandwich”.  The waiter returns ten minutes later with a check for $1000 and hands it to the guy.  The guy says, with a smirk, “Out of Elephant Ears?”  “No,” replies the waiter, “we are out of rye bread.”The essence of a good joke is that you don’t see the punch line coming.  The chance of being out of rye bread but not elephant ear is remote and what makes the joke funny. But for the people of St. Thomas, on September 15, 1885 – it was not a joke. 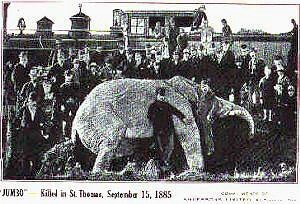 On the night of September 15, 1885, the Circus was playing the town of St. Thomas, Ontario. The circus’ 29 elephants had completed their routines and all but two had been led from the big top to their waiting railway cars.  Only the smallest, named Tom Thumb, and the largest, Jumbo, remained until the end of the show to take a final bow.  After the completion of the show, as Matthew Scott guided Tom Thumb and Jumbo along the tracks, a loud whistle announced an impending doom.  An unscheduled express train, unable to stop, hit Tom Thumb, scooping him up on its cowcatcher and knocking him down a steep embankment.  Jumbo, who was leading Tom Thumb was caught between the embankment and circus train and had no place to flee.  He was hit from the rear.  The train was derailed and Jumbo was crushed; his skull reportedly broken in over a hundred places.   Still conscious and groaning, even with the massive injuries, the mortally wounded elephant was comforted by Scott until it died.

A life-size statue of the elephant commemorates the tragedy in St. Thomas.  Some towns folk also painted a circus mural on one of their buildings. 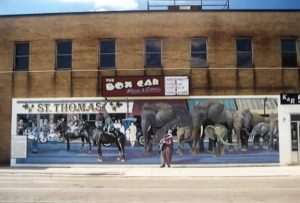 Jumbo’s skeleton was donated to the American Museum of Natural History in New York City. The elephant’s heart was sold to Cornell University. Jumbo’s hide was stuffed and traveled with Barnum’s circus for a number of years. In 1889, Barnum donated the stuffed Jumbo to Tufts University, where it was displayed until destroyed by a fire in 1975. Jumbo’s tail, which survived the fire, is kept in the University archives. The great elephant’s ashes are kept in a 14-ounce Peter Pan Crunchy Peanut Butter jar in the office of the Tufts athletic director. A statue of “Jumbo” was purchased from an amusement park and placed on the Tufts campus after the fire, however this statue erroneously depicts an Asian elephant, not an African elephant. In honor of Barnum’s donation of the elephant’s hide and more than $50,000, Jumbo became the university’s mascot, and remains such to this day. 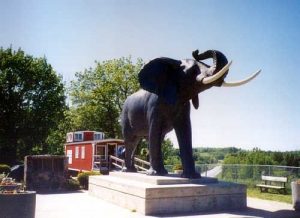 As a result of Barnum’s publicity the word “jumbo” is now synonymous with “large” or “huge”.  For example, a large hot dog or sausage may be called a “jumbo hot dog or sausage” and the the Boeing 747 is known as the “Jumbo Jet”. 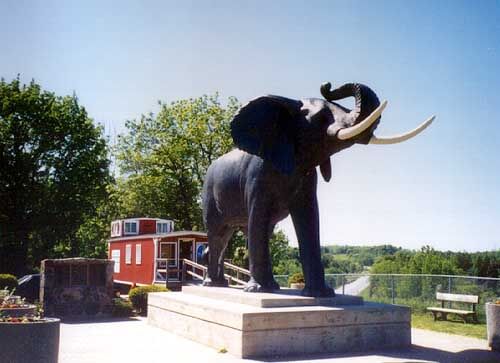 Article Name
Jumbo The Elephant
Description
Jumbo The Elephant was an African elephant, born in 1861 in the French Sudan. He was exported to France in 1863 and then to London Zoo in 1865.
Author
Bruce Ricketts
Publisher Name
Mysteries of Canada

One Response to “Jumbo The Elephant”

When was the statue of Jumbo installed in St. Thomas. Thank you.