Archibald McNab was the 13th chieftain of the McNab clan from the Loch Tay region in Scotland. In order to escape heavy debts, he fled to Upper Canada where he negotiated for land along the Ottawa River so that he might bring his clansmen from Scotland as settlers. He was empowered by the government to assign up to 100 acres per family and was granted personally 1200 acres which could be increased upon completion of the development of the settlement. 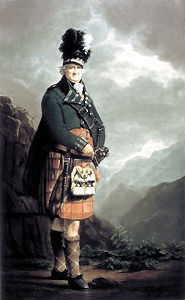 In 1825 eighty-four [some accounts refer to the number of settlers as 115]  settlers were met on their arrival by McNab and his piper. From there, they travelled by boat or walked through the bush for three weeks until they reached their new settlement at Chats Lake.

Under McNab, they endured many hardships. Provisions were scarce, and had to be carried long distances for the first three years. The already impoverished Scots were hounded for interest payments required on any money spent on their behalf and then forbidden the right to work outside McNab’s “serfdom”.

Young children in the settlement came close to starvation; meanwhile, the Laird gave lavish parties financed by the money flowing in as income from his large timber interests. Petitions were drawn up by the settlers and sent to public bodies but McNab’s strong support of the Family Compact, the ruling oligarchy of the time in Upper Canada, caused their pleas to fall upon deaf ears.

At the time of the Rebellion of 1837, McNab was appointed “Laird Colonel of the 20th Battalion of Carleton Light Infantry”. But his own clansmen, fearing that McNab would gain even more power over them in a time of military service, refused to serve under his command.

Finally, the Crown Lands Agent at Perth was appointed to investigate, and, after surveying the settlers, concluded that all charges against McNab were valid. McNab, sensing trouble ahead, quickly offered to sell his lands to government for 9000 pounds but in the end he settled for 2,500.

The government began issuing Crown grants to the settlers, removing the Laird’s feudal powers. His fortunes continued to dwindle, though he tried suing his clansmen for his losses, he was unsuccessful, and returned to Europe.

The Laird of McNab died in 1860 in a small village in France. The township retains his name.

The Laird of McNab was last modified: February 4th, 2017 by Bruce Ricketts