It is not difficult to believe that these legendary lakes have always been as they are today, but it would be wrong. For example, Lake Huron today, when seen on a map, has the shape of a human being, hunched forward, and carrying a pack or bundle on its back. This often invokes the image of a Native person on a portage, and indeed, the entire Great Lakes Basin has been home to many Native communities for many thousands of years.

Now, if you look at the ‘pack’ on the ‘back’ of Lake Huron, the long bit of land jutting North between the ‘pack’ and the ‘back’ is the Bruce Peninsula, an area of great beauty and great history. The Chippewa Nation has long roots in the area; today there are two Chippewa reserves, at Saugeen and at Cape Croker (pronounced Croaker). 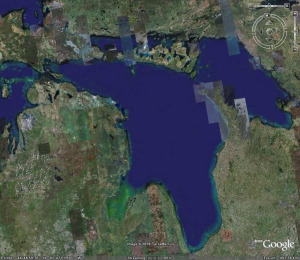 Chippewa elders of the Cape Croker reserve have long repeated ‘legends’ of their ancestors being able to walk from Tobermory, at the Northern tip of the Bruce Peninsula, to Manitoulin Island, an area that, today, is covered by 90 km of water, and is a scuba diver’s paradise, with many shipwrecks to dive. The only way across today is the Chi-Cheemaun ferry, which makes the crossing in 90 minutes.

The Chippewa legends tell that, in ancient times, the Chippewa people could walk North for a long, long time, through a great tunnel, and they eventually met unfamiliar people walking South, people who wore strange clothes and carried strange weapons. There were many rivers and waterfalls on the route.

Recently, scientists from the Geological Survey of Canada have mapped the underwater topology (shape) of this area, and discovered that much of the submerged land of today was once dry. One feature, which prompted further underwater research, is a ridge of rock situated roughly between Tobermory and Manitoulin Island; the ridge is 1750 metres long, and up to 5 metres high. Evidence of running water and waterfalls was found, as were roots and remains of cedar trees more than 9000 years old. Obviously, the ridge was once dry land.

It is now clear that, indeed, a land bridge existed between Tobermory and Manitoulin Island in the ancient times when the glaciers were gone and the Great Lakes were beginning to fill.  And is also clear that we have so much to learn from the legends and stories of this great land.