If you are out and about in this great country of ours, you will always be close to history.

I was camping the other weekend with the family, at a place called Murphy’s Point, near Perth, Ontario.  On the drive into this special place, I happened to notice a sign that pointed to the Silver Queen Mine.  I knew that there was not very much silver in the area, so the name was a drawing card.  I decided to do the walk in to the site.

It was worth it.

There are guided tours of the site offered by Ontario Parks’ staff.  I am sure they are of value but I like to explore without help.  Anyway the tours were not scheduled to begin for another 2 weeks or so.  Maybe I will return for the tour this summer.

The mine operated between 1903 and 1920 and was a marvel of its day.  Unlike its name, the mine did not produce Silver.  Mica, feldspar and apatite were produced by miners who bashed, chipped and chiselled the minerals from the rock.  They also drilled and blasted but the drilling was something to behold.  Picture, if you will, that you are crouched down holding an octagonal iron bar that has a a sharp point.  Above you is a big hairy brute with a sledge hammer who is about to strike the top of your iron bar (called a twist drill).  You hope that he is neither drunk nor short sighted.  He hits your bar and then you twist it a bit before he strikes it again.  To make this nightmare even worse there are two brutes with hammers for every bar twister.  You have just doubled your chance to be nicknamed “Lefty”. 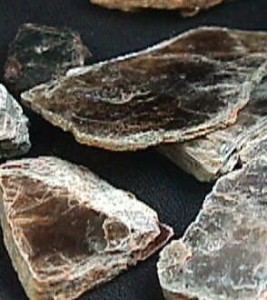 Mica from Queen Silver Mine

Once the drill hole was four feet deep, it was packed with explosives and a clay plug and then blown to loosen the rock.  The average team could do 1-2 feet per hour so you can understand that odds were not in the favour of the drill-holder.

Later on in the life of the mine, a steam powered drill began to be used, probably saving a few digits from separation.

In addition to pit mining, the Silver Queen also has a number of tunnel mines.  Some up to 60 feet deep and dug by hand.

Mica is an interesting mineral.  It is light and flakey and when peeled down a single layer of

flake, it is transparent (or at least translucent).  It does not conduct electricity, can withstand very high temperature and can flake into very large sheets.  It is still in use today in electronic equipment, such as capacitors, and in the form of a tape for insulation purposes.

Below you will find a series of pictures (click on them to see them) from the mine site.  Visit it,  It worth your time.