Back in the late 1970’s I worked with a CAD/CAM/GIS company.  We used to sell, as part of our systems, specialized plotters supplied by a company called Ahearn & Soper.  Little did I know that one of the founders, Thomas Ahearn, had such a glorious history.  His company played a pivotal role in the daily lives of the residents of Ottawa and in the lives of all Canadians. June 24, 1855 was just another day for most people in the Labreton Flats area of Ottawa.  People generally went about their business.  The Flats were a vibrant part of the growing town.

From within the household of John and Honora Power Ahearn, of Labreton Flats, the day was anything from routine.  The cry of a newborn child was heard.  The world welcomed Thomas Ahearn.  Within not too many years the world was thanking John and Honora for their wonderful gift.

At the age of 15, Thomas Ahearn joined the JR Booth company to learn about the field of telegraphy.  His starting wage was zero, as Ahearn had volunteered to work for free, just so he could learn. 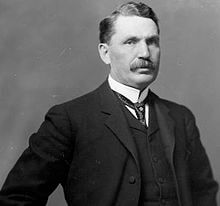 He learned his lesson very well.  In 1877 he read an article in Scientific American about Alexander Graham Bell’s pioneering effort to develop a telephone system.  Ahearn slapped together two cigar boxes, a series of magnets and wire.  Then using existing telegraph lines, built the first long distance telephone routing from Ottawa to Pembroke.  In order to settle a $16 hotel bill in Ottawa, he traded his cigar box phone.

His foray into the telephony business did not go unnoticed by Bell, which offered Thomas Ahearn the role of manager of the Ottawa office of Bell Telegraphone Company.

He bounced around the telegraphic industry for a number of years picking up more experience and contacts.  One of his new friends was Warren Soper who was the manager of Dominion Telegraph in Ottawa.  In 1881, they both resigned their respective positions to form a new electrical contracting company called Ahearn & Soper.

Ahearn’s firsts where many and varied:

In 1882 he installed 65 arc street lamps, thus introducing electric light to Ottawa.  His Ottawa Electric Light Company built a small waterwheel at Chaudière Falls on the Ottawa River to supply power for the street lighting. This is possibly the first hydraulic generator in Canada.

In 1887, for Queen Victoria’s Diamond Jubilee, Ahearn and Soper were contracted to illuminate the Parliament Buildings with thousands of electric lights.  This practice continues to this date around Christmas.

In 1891, he introduced the first electric streetcar into Canada at Ottawa.  He built the first electric powered hot-water heating for the cars in the winter.  He also invented a rotating brush sweeper to clear the track of snow and argued to get Sunday service for the streetcars. (image below from Ottawa Archives) 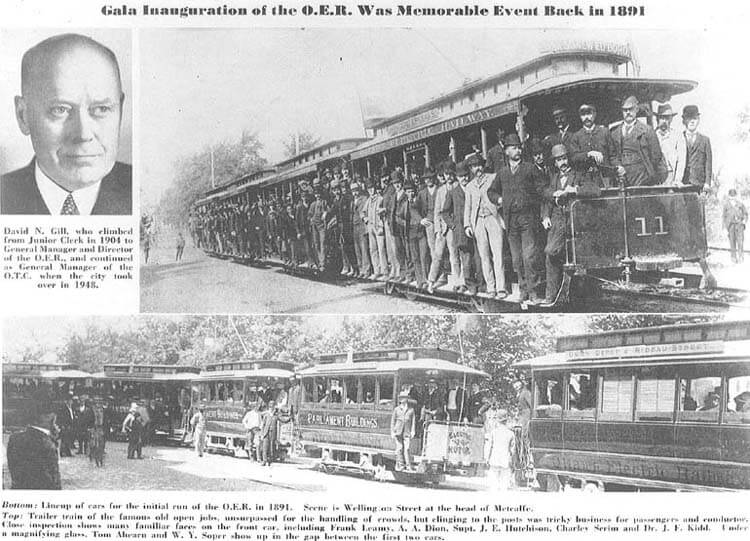 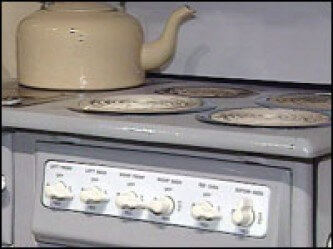 In 1892 he cooked up a mess of Saginaw Trout with Potato Croquettes and Sauce Tartare for his friends and family, thus becoming the first person in the world to cook with electricity.
In 1899, the first person to drive a small electric automobile in Ottawa.
In 1927, Thomas Ahearn, with Prime Minister Mackenzie King and Justice Minister Ernest Lapointe, made the first transatlantic telephone call to Britain.
In 1932, he was appointed as chairman of the Broadcasting Committee for the Diamond Jubilee of Confederation.  One of his tasks was to produce a coast-to-coast radio broadcast of the festivities on Parliament Hill. For this, he built the 32,000 kilometres of wire needed to connect the country from east to west. Governor-General Lord Willingdon said that this “had done more to create a national spirit in Canada than any other movement.”

Thomas Ahearn died in 1938.  He was truly a man with a vision for his country and for the world.

One Response to “Thomas Ahearn – From Cigar Boxes to Streetcars”

Very interesting. My mother, a neophyte RN in 1922 was engaged for some months as. Live-in nurse at the Soper residence in Rockliffe. Apparently she lived in luxury, waited upon by the household staff, and reminisced fondly of her experience there. I would like to incorporate some of your notes in our family history.