General James Wolfe, the leader of the English forces in the conquest of Canada, died on the Plains of Abraham at Quebec.

Wounded by musket shots he expired at the moment of victory over the French. After the battle on 13 September 1759, his corpse was removed from the battlefield, embalmed and put in a stone coffin for transport back to England aboard the ship the Royal William. When the body of the hero of Canada arrived in Portsmouth, England it was greeted with great fanfare.

One of Wolfe’s friends the Duke of Richmond sent the sculptor Joseph Wilton to Portsmouth to take a death mask of General Wolfe. Upon opening the coffin it was found that the body had decomposed to such an extent that the sculptor could only make a rough model of the face of Wolfe. Someone who had known James Wolfe before he went to Canada corrected Wilton’s image from memory. 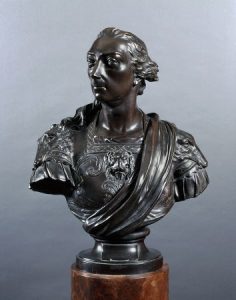 Wolfe’s body was placed in a hearse and transported to Greenwich where the family held a private funeral service at St. Alphege. He was buried next to his father in the church.

The British were so grateful for the sacrifice of General Wolfe and his victory in Canada that they held thanksgiving services in churches throughout the country and celebrations including bonfires and fireworks continued for several days.
There soon arose a demand for images of the new hero of the nation. People wanted to honor him by having a portrait of him or a picture of him dying at The Battle of Quebec in their houses. This presented a problem because only a few images of Wolfe were painted before he went off to Canada at the age of 32. These pictures were unavailable to the many artists who wanted to gain fame and money by creating images of the fallen hero. To solve their problem they sold completely imaginary portraits of Wolfe and many of them made a good deal of money. 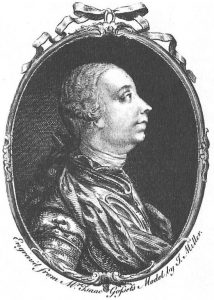 When the nation wanted to show its gratitude to James Wolfe by building a monument to him in Westminster Abbey they hired the sculptor Joseph Wilton to create a great carved marble scene of Wolfe dying among his soldiers. For Wolfe’s face Wilton reused the mostly imaginary portrait bust he made after he had tried and failed to take a plaster cast, death mask.

The most famous picture of General James Wolfe was a painting by Benjamin West. His painting The Death of General Wolfe was first shown to the public in 1770, 11 years after the battle at Quebec. For Wolfe’s face Benjamin West used as his model or source the image created by Joseph Wilton. Benjamin West’s picture was very popular. He made several copies of it for sale and an engraving of it was printed and sold to the hundreds of people who wanted a picture of their hero. They didn’t mind or didn’t know that the face of General Wolfe in the picture was not actually an exact likeness. 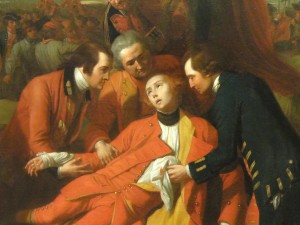 Detail, The Death of General Wolfe by Benjamin West

We don’t know what James Wolfe really looked like.

One Response to “General James Wolfe”