Joseph Albert Guay was born in Quebec in 1917. The youngest of 5 children, young Joseph was spoiled and always expected to get his way. As a young man, he sold watches and jewelry on commission.  He seemed to be a natural, but very persistent, salesperson.  When World War II broke out in 1939, he got a job at Canadian Arsenals Limited in St. Malo, Quebec.  The arsenal closed in 1945 and Joseph opened a jewelry and watch repair shop in Quebec City.

During his time at Canadian Arsenals, Joseph Guay met and married Rita Morel.  The marriage began well, all smiles and chuckles, until the Guay’s had their first child.  Seems that Joseph did not like being second fiddle to a baby.

As time progressed, the jewelry business began to fail, debts piled up and both his eye and his ardor began to scan for new romance.  It was not long before Joseph Guay settled on 17-year old Marie-Ange Robitaille, whom he dated under the assumed name of Roger Angers.  Joseph set Marie-Ange up in a small apartment and offered her an engagement ring.  Soon after, Rita discover the arrangement and confronted the pair.  Marie-Ange left the relationship shortly afterwards citing the marriage as her reason.

In his fury, Joseph concocted a plan to get rid of his wife.

In his business, Joseph traveled often by airplane to deliver or receive merchandise.  His plan was to convince his wife to take one of the trips and then blow up the plane!

Genereux Ruest, an employee of Guay, designed, built and packaged a time bomb for Joseph.  Joseph also employed Marguerite Pitre, the sister of Ruest, to deliver the package to Canadian Pacific Airlines for transfer to Baie-Comeau, on the same flight as Rita.  Joseph took Rita to the airport in Quebec City and purchased a $10,000 insurance package on her (a common practice during the time).

The plan went off with out a hitch.  On September 9, 1949, 41 minutes into the flight, the plane exploded over Sault-aux-Cochons. A town at the confluence of little St. Francis River and the St. Lawrence.  All 23 persons, including Rita, were killed.

Joseph was elated.  He had a dead wife and $10,000!  However, Marguerite Pitre attempted suicide 10 days after the bombing and while in hospital confessed to her part in the crime.

Joseph Guay, Genereux Ruest, and Marguerite Pitre were arrested, tried and hanged for their crimes.

At the time, it was the worst mass murder in all of North America! 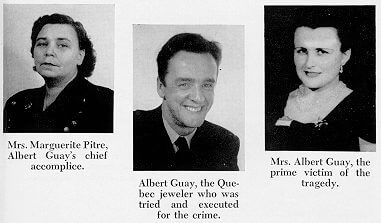 Article Name
Johseph Guay - The Worst Mass Murder in North America
Description
Joseph Guay's plan was to convince his wife to take one of the trips and then blow up the plane! Genereux Ruest built and packaged a timed bomb for Joseph.
Author
Bruce Ricketts
Publisher Name
Mysteries of Canada