It was June 1953.  Hollidaysburg, Pennsylvania natives, 17-year old Richard Lindsey, his father Eugene Lindsey and 20 year-old Frederick Claar left home for a bear hunting trip in the Gaspé. About a month later, their bodies, or what was left of them after bears had mauled them, were found in the bush.  Around the bodies and scattered by the bears, were the victim’s clothing showing telltale signs of gunshot wounds. Shortly afterwards, Wilbert Coffin, a woodsman and mining prospector was arrested, charged with murder and later hanged for a crime he probably did not commit. 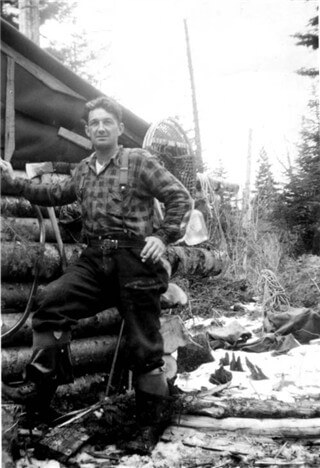 Wilbert Coffin was born in 1913 and grew up with a desire to explore.  He became a mining prospector, met a women and fathered a child named James.  He was described as “kind”.  Wilbert spent a lot of time in the bush and was sought out by many hunters to guide them to where the bears were.

When the American hunters turned up shot dead in the woods, Coffin was the prime suspect. He was the last person seen with one of the hunters, after giving him a ride to town to get gas.  He also had some of the men’s possessions, which, he later admitted that he stole.

Coffin was found guilty of murdering one of the men and was sentenced to death by hanging, the maximum sentence.

The story should have ended there had it not been for a group of very determined lawyers who smelled something rotten in Gaspé.

Lawyers fighting to clear his name say all the evidence against him is circumstantial, his defence lawyer was clearly incompetent and that his trial — a case rife with political pressure — was a sham. There were no eyewitnesses. “The Duplessis government, by all accounts, needed a quick resolution of this case,” said Elisabeth Widner, co-president for the Association in Defence of the Wrongfully Convicted. “Hunting was and probably still is a big business in that part of Quebec. And this was extremely damaging publicity that these three American hunters had come in and were essentially murdered.”

“What’s really unfortunate in this case is that he didn’t testify at his trial and was never in a position to explain to the jury how he came to be travelling around with the hunter’s possessions,” said Widner.

An affidavit later provided to the Supreme Court of Canada said he stole the items from the hunters’ truck.

Coffin’s lawyer announced he was going to be calling up to 100 witnesses to defend his client, said Widner, but when the Crown’s case ended, he stood up and said “the defence rests.”

“He didn’t present one piece of evidence to support his client,” she said.

His sentence was appealed, and made it all the way to the Supreme Court of Canada, which upheld his conviction.

In the debate over his conviction, there was even a Royal Commission to review the case. It also upheld the verdict.

But a small group of Canadians have continued to champion Coffin’s cause. The federal department had to address the case after writer Alton Price made a formal application for it to be reviewed in 1998.

He was railroaded,” said Vancouver writer Lew Stoddard. “He was the fall guy.”

Many believe Wilbert Coffin was a scapegoat for a province determined to make a quick arrest and salvage its lucrative American tourist trade.  Quebec Premier Maurice Duplessis, not known as a soft touch, hand-picked the prosecutor and lead detective, who interrogated Coffin in vain for 16 days.

Raymond Maher, a Quebec City lawyer and Duplessis supporter, showed up in Gaspé and volunteered to represent Coffin. Described as drunk for much of the trial, Maher barely cross-examined any witnesses and even worse, he didn’t call Coffin to testify.

Coffin had “a problem” because items belonging to the hunters were in his possession but Maher did not bother to ask a question about how that came to be.  In an interview with police before his trial, Coffin said he met the trio on June 10, 1953, while driving into the bush to prospect. Their truck had broken down, so he drove them into town for a new fuel pump and back to the camp, promising to check in on them in a few days.  He stated that one of the hunters, Eugene Lindsey, paid him $40 in U.S. bills for his trouble and Lindsey’s son, Richard, gave him a pocket knife.  When he checked back later, the camp was deserted except for the truck, Coffin added that he waited several hours and took the old fuel pump and some clothes from the truck before leaving. He said he was drunk at the time. This evidence was never brought up at trial.

In his closing jury address, the prosecutor said the “eyes of America” were on the trial and counting on a conviction.

Coffin was described as very gentle, fun-loving and incapable of murder. “He was a person who couldn’t stand to see even a little rabbit caged up.”  But Maher never brought that up in court.

“You can’t underestimate the role politics played in this case,” Widner said.

Jim Coffin said his father “was guilty of only being a good Samaritan.”

“He hung for helping a man. And I don’t think that’s right.” 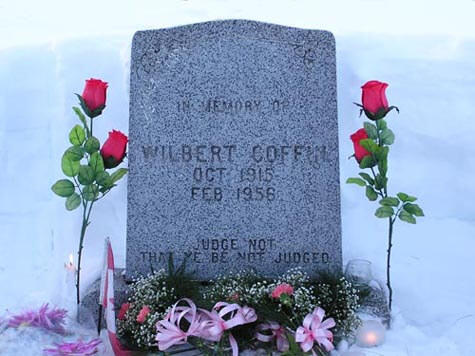 Young Jimmy Coffin, who was 8 when his father was hanged on Feb. 10, 1956, said his mother sheltered him from news reports about the execution. Once she finally told him the truth, “it was never mentioned around the house for a few years. It was very painful.”

She later moved to northern Quebec, where his father’s family gave her some land, and Jim Coffin built her a house. She visited Gaspé from time to time, but it became tough. “I think emotionally it was too hard.”

So here we are 54 years after the death of three men in Gaspé and the hanging of a probable innocent man 51 years ago.  Are we any safer?  Can we trust the justice system to protect us when we need it?  Was Wilbert Coffin guilty of the crime for which he was put to death?

In 1956 they  were so sure.  But in 2007, the Federal justice department is investigating a new tip. Evidence had recently surfaced suggesting a man named Philippe Cabot was the murderer and his own son might have been a witness!

In effect, Coffin was murdered by Duplessis, that wonderful man who tried to break unions, worked on behalf of US interests, ruined the life of tens of thousands of orphans and children of unwed mothers, set back Quebec social reform, and so on… Weak, corrupt, evil man, and those were his best attributes. Trudeau promised to deal with the Coffin case. Get on with it, then!

Duplessis, sent Maher to be the guarantee that Coffin would be found guilty. Politics, and the American $$$$ got the best of him…,,SCUM the both of them, they set Coffin up,to keep the American hunters and $$$$ flowing in, typical politician, and crooked lawyer(s).

Will the family receive restitution and the clearing of his name, and when?

Sadly it happened to him, but it can also happen to anybody in this day and age…don’t be fooled by thinking otherwise.

Just look at the criminal gangs, they have mountains of cash, and legally owned enterprise right amongst us…where is Duplessis when you need him.

Trudeau likes to apologise..this would be a good one for him to do.