On Saturday, August 11, 2018, the City of Victoria, British Columbia, removed a bronze statue of Canada’s First Prime Minster, Sir John A. Macdonald, from the grounds outside City Hall. According to Victoria’s Mayor Lisa Helps, the decision to remove the statue was part of the city’s ongoing reconciliation program with the local Esquimalt and Songhees First Nations. Sir John A. Macdonald, Helps explained, was one of the chief architects of Canada’s residential school system- an institution which resulted in the suffering of members of various First Nations, including the Esquimalt and the Songhees.

Helps’ decision to remove the statue has been roundly criticized by many who object to what they see as an attempt to erase Canadian history, and who maintain that it is irrational to judge figures from the past by today’s moral standards. Supporters of the decision, on the other hand, argue that the injustices that Macdonald inflicted upon the First Nations outweigh the contributions that the Father of Canadian Confederation made towards the betterment of the nation he helped found, thus justifying the removal of statues erected in his honour.

Many supporters of the decision to remove the statue might be surprised to learn that John A. Macdonald, despite his flaws, helped to save many of Canada’s First Nations from a terrible fate.

In the mid 1800’s, the western Canadian plains were dominated by the powerful Blackfoot Confederacy, an alliance comprised of the Siksika, the Peigan, and the Kainai First Nations. The Blackfoot were a warlike people notorious for slaughtering trespassers who dared to venture into their territory. They were also great hunters who subsisted almost entirely upon the buffalo, which roamed the Great Plains in enormous herds.

In the 1840’s, the American Fur Company (AFC), a major American fur trading enterprise which competed with Canada’s Hudson’s Bay Company (HBC), expanded into the Upper Missouri region on the border of Blackfoot territory. In 1846, they established a fur trading post called Fort Benton on the banks of the Missouri River in northern Montana, in the heart of South Peigan territory. They began to trade with the Blackfoot on whose lands they encroached, selling muskets, steel tools, and wool blankets in exchange for buffalo robes. In a few short years, Fort Benton rose to become the economic centre of the Great Plains.

Similar to the Hudson’s Bay Company, one of the commodities that the AFC sold to its native customers was diluted liquor. Many of the South Peigan, as it turned out, had an enormous affinity for alcohol, and over time many of them were drawn into alcohol dependency. Cognisant of the negative effect that alcohol had upon their Blackfoot clients, the AFC was careful to limit its sale, but kept the commodity on its shelves in order to compete with the HBC.

By the 1860’s, the fur trade was in decline, and in 1865, the AFC sold Fort Benton to the U.S. Army. Almost immediately, a number of small fur trading companies formed to fill the vacuum. Unfortunately, many of these smaller companies cared far less about the welfare of their Blackfoot customers than the larger company that they replaced. In an effort to compete with one another, they exploited the Blackfoot’s proclivity for alcohol, selling enormous quantities of liquor to them without restraint. While the quantity of the alcohol these independent traders sold was greater than that of the AFC, its quality was often much worse. Instead of selling diluted rum or brandy, these traders peddled a cheap, dangerous concoction of American whiskey, red ink, turpentine, tobacco, and river water, sometimes supplemented with a dash of toxic strychnine.

The combination of dishonest business practices and a surfeit of whiskey bred the perfect environment for violent conflict, and in no time the whiskey traders and the Blackfoot were at each other’s throats. The many bloody altercations between white frontiersmen and South Peigan warriors that characterized Montana in the 1860’s were dubbed the “Blackfoot Wars”.

When a number of Montanan farmers were murdered by Blackfoot braves, the United States Army stepped in. Rather than resolve the conflict diplomatically, the U.S. Army decided to discipline the Blackfoot through violence. This heavy-handed approach was characteristic of the United States’ relationship with unruly or uncooperative American Indians; that same decade, the U.S. Army had fought bitterly with the Cheyenne, Arapaho, Sioux, and Apache Indians in what are collectively known today as the American Indian Wars. Ultimately, the U.S. Army’s involvement in the Blackfoot conflict culminated in the Marias Massacre of 1870, in which a U.S. Cavalry squadron slaughtered a band of 200 friendly South Peigan, most of them women, children, and elderly men, on the banks of the Marias River.

In order to avoid conflict with the U.S. Army, many South Peigan bands fled north into British territory, where they knew the blue-coated “Long Knives”, as they often called sabre-wearing U.S. Cavalrymen, would dare not follow. A handful of enterprising Montanan whiskey traders decided to follow their clients into Canada and establish trading posts across the border, in what is now Southern Alberta and Saskatchewan. Like their American precursors, the traffic of these so-called “whisky forts” had a devastating effect on the Blackfoot people, transforming a powerful Confederacy into a nation of starvelings and alcoholics who would do anything for a cup of firewater.

Following Canadian Confederation in 1867, John A. Macdonald endeavoured to make Canada a great nation stretching from the Atlantic to the Pacific. In order to accomplish this, he knew that he would have to convince the Province of British Columbia to accept the terms of the Canadian Constitution, and in order to do that, he would have to connect British Columbia with the easterly Dominion of Canada via a massive transcontinental railroad. In order to build this railroad, the Dominion of Canada would need to own the land in between British Columbia and the Dominion- a vast, wild territory controlled by the Hudson’s Bay Company, known for centuries as Rupert’s Land (present-day Alberta, Saskatchewan, Manitoba, and the Northwest Territories). In 1870, Macdonald’s government, with the permission of the British Crown, purchased Rupert’s Land and dubbed it the

When John A. Macdonald learned of the American whisky trade that was taking place in the North-West Territory, he knew he had to put a stop to it in order to assert Canada’s sovereignty there. Throughout much of the 19th Century, the concept of Manifest Destiny- the idea that the United States was destined to expand across North America- had a strong influence on American foreign policy. The United States had acquired Louisiana from the French, Oregon from the British, Texas from the Mexicans, and Alaska from the Russians, and since the end of the American Civil War, had shown an interest in expanding the American Empire into Rupert’s Land. If Canada failed to assert its authority on this western frontier, the North-West Territory would almost certainly fall into the hands of the United States.

The Prime Minister knew that the only way to achieve this end would be to dispatch a force of mounted riflemen to the North-West Territory to quell the whisky trade. This force could not be strictly martial in nature, however; these riflemen would also have to contend with the powerful Blackfoot Confederacy on whose land they would encroach, and unlike the Americans, the fledgling Dominion of Canada could not afford to wage wars against hostile Indians. It was clear to John A. Macdonald and his Cabinet that the only way to combat the whisky trade, come to a peaceful arrangement with the Blackfoot Confederacy, and ultimately bring law and order to the Canadian west, thus paving the way for a transcontinental railroad, was by dispatching a force of mounted policemen to the western prairies. And thus the concept of the North West Mounted Police (NWMP) was born.

For several years, John A. Macdonald, who was notorious for his procrastination, delayed the formation of the NWMP, afraid that the Dominion of Canada was still unable to afford it. Finally, after receiving word of the Cypress Hills massacre, which saw scores of Canadian Assiniboine slaughtered at the hands of American wolfers, Macdonald authorized the formation of the North West Mounted Police.

The Early Accomplishments of the NWMP

In 1874, the North West Mounted Police rode from Manitoba to the southwestern edge of the North-West territories. There, through tact, courage, and candour, they brought an end to the whisky trade and established a good relationship with the local Blackfoot. 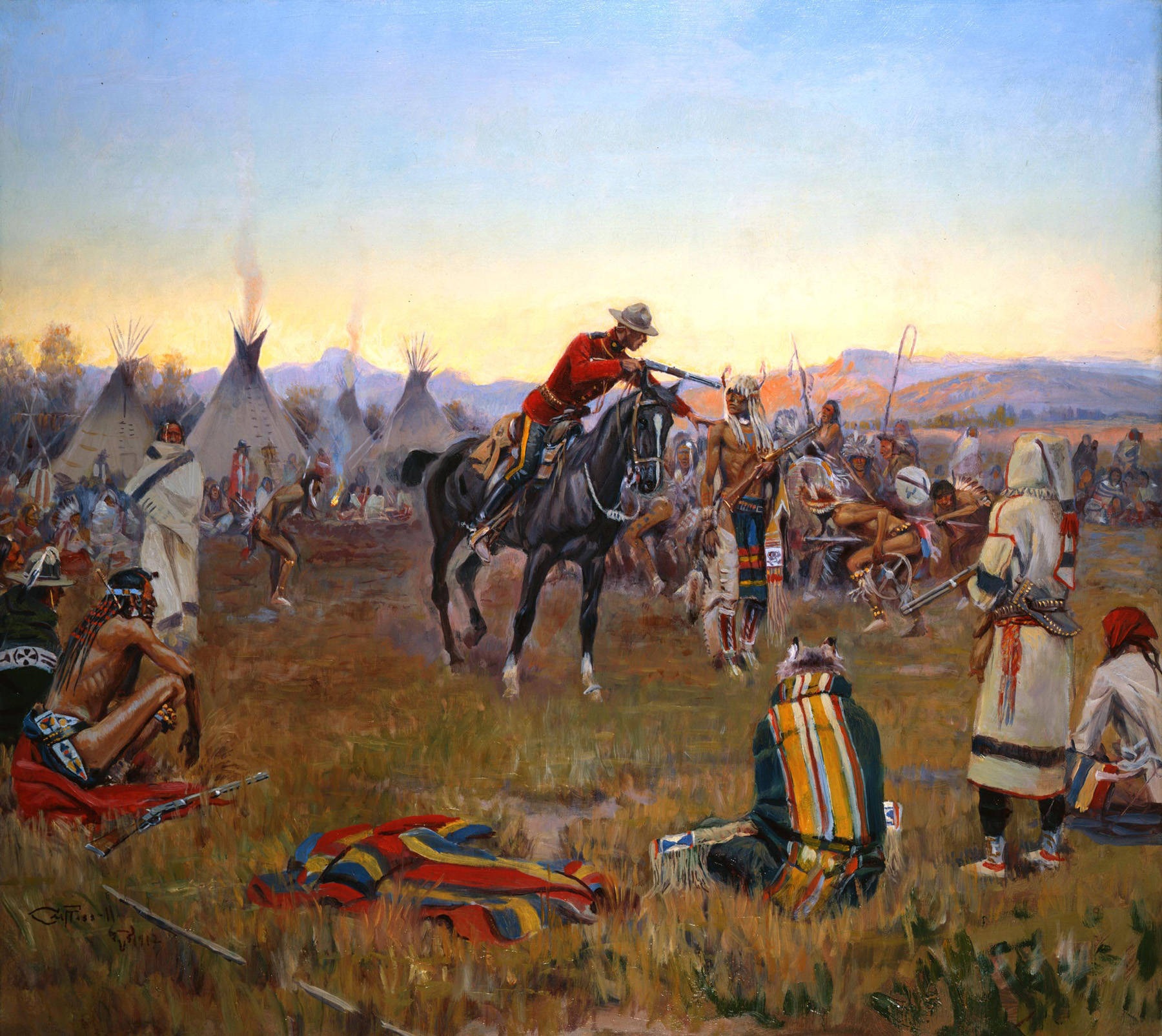 If it weren’t for John A. Macdonald, the North West Mounted Police would likely never have formed, and what is now Alberta, Saskatchewan, and much of Manitoba would probably have fallen into the hands of the United States. One can only speculate as to the tremendous damage the whisky trade would have wrought upon the Blackfoot people had it not been suppressed by the NWMP, and on the atrocities that would have occurred had the blue-coated troopers of the American Cavalry dealt with the Peoples of the Canadian Plains instead of the red-coated Mounties.

Considering all this, does the Father of Canadian Confederation deserve a second chance in the eyes of Canadians? Or does he deserve to have his statues torn down? Let us know in the comments below.

How John A. Macdonald Helped the First Nations was last modified: August 28th, 2020 by Hammerson Peters