For as long as human beings have inhabited Canada’s boreal forests, the wolf has occupied a place of special significance in the hearts and minds of subarctic Canadians. The native Dene peoples who pitched their moose hide teepees in the wilds of Northern Canada long before the white man made his appearance in that quarter believed that wolves were the reincarnated spirits of their ancestors, and often went to great lengths to avoid killing them. Many of those same Dene peoples, from the Han of central Yukon to the Slavey of the Northwest Territories, adopted the Wolf as the symbol of one of the two moieties into which they divided themselves (the other moiety usually being the Crow or the Raven); traditionally, a man of the Wolf moiety could only marry a woman of the Crow moiety, and vice versa. The Inuit who made their homes in the tundra north of Dene territory often trimmed the hoods of their parkas with wolf fur, since that substance, along with wolverine fur, is the only natural material on which humid breath will not depose into ice during wintertime. Even the white fur traders who began trickling into Northern Canada in the early 1800s, despite despising wolves for interfering with the trap lines of their native clients, often attempted to crossbreed their sled dogs with their wild subarctic cousins in the hopes of acquiring robust wolfdog puppies. 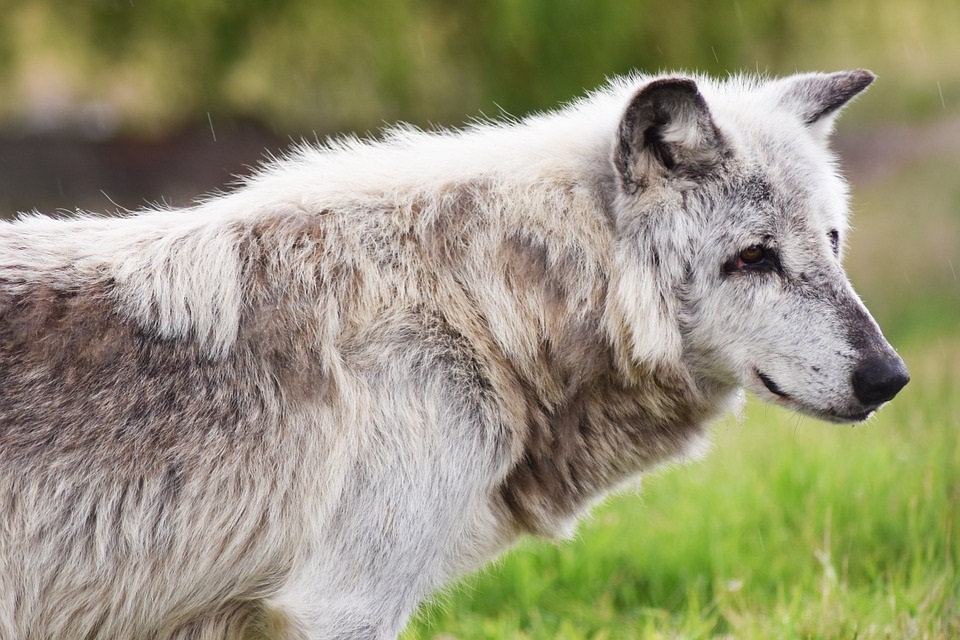 In addition to the domestic dog, Canada is currently home to twelve recognized subspecies of gray wolf. These subspecies can be roughly lumped into six categories based on their distribution and habitat: the Artic Archipelago variety; the tundra and barrens variety; the Newfoundland and Labrador variety; the Pacific Northwest variety; the Great Lakes variety; and the northwestern forests variety. Although some biologists have argued that a few of these subspecies share too many similarities with each other to be classified as distinct, indigenous legend and frontier lore suggest that an additional variety of Canadian wolf ought to be added to the list.

For years, tales of a strange lupine monster currently unacknowledged by the scientific community have been leaking from Northern Canada to the Outside, as northerners often refer to southerly civilization. Since at least the 1950s, traders, trappers, and aboriginal Canadians have returned from the northern wilds with stories of an enormous solitary wolf said to haunt the boreal forests of Alaska, Yukon, and the Northwest Territories. Often referred to as the ‘Waheela’, this creature is typically described as having a wide head, a powerful build, a snow-white coat, and a size many times the magnitude of that of the average gray wolf. 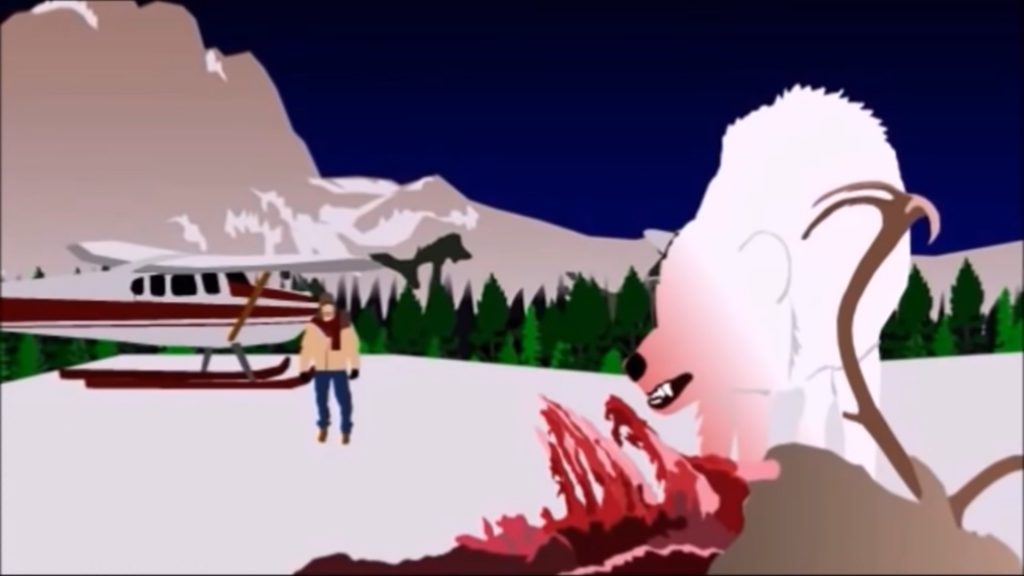 I detailed a number of alleged Waheela sightings in my book Legends of the Nahanni Valley, and am pleased to present a new, never-before-published sighting here in this article. Experienced and brought to my attention by Justin Watkins of Spruce Lake, Saskatchewan, this sighting takes place at the southern edge of Canada’s boreal forest, making it the southernmost Waheela sighting in recorded history, to the best of this author’s knowledge.

The following is Justin’s own account of the sighting, lightly edited my this author for the sake of fluidity: 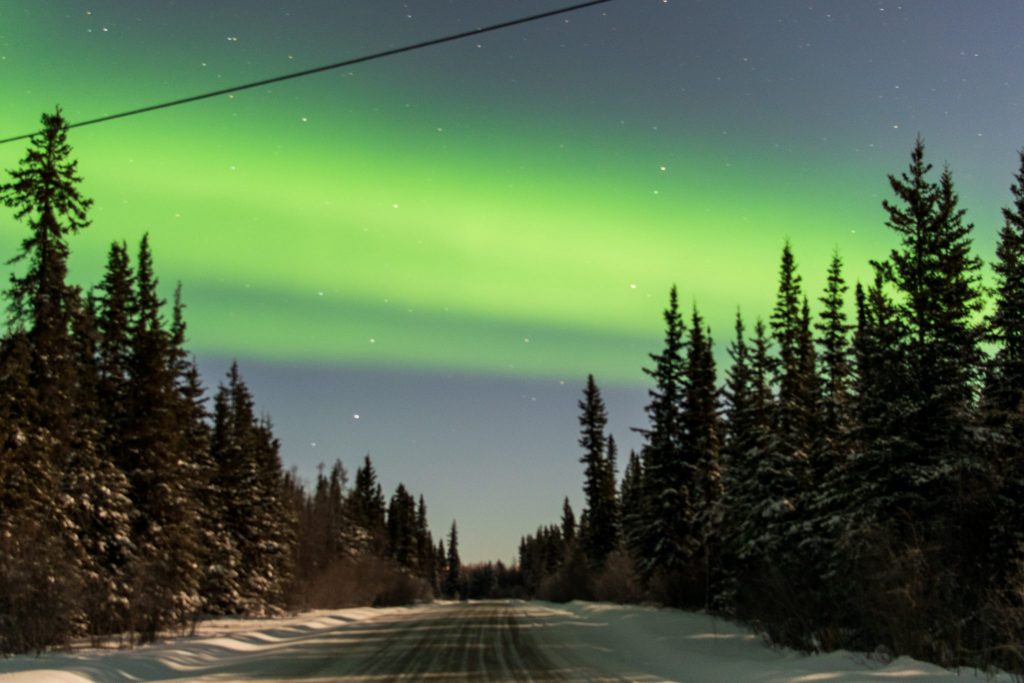 The Hay River Highway, courtesy of Daniel Cook. If you’d like to see more of Daniel’s photos, please check out @DanielCookPhotography on Instagram, or click this picture.

“We were about a kilometer from Spruce Lake when something in the ditch beside me caught my eye. It was a wolf. I could barely make it out due to the darkness, but the headlight was shining a little into the ditch.”

Incredibly, the creature kept pace with the vehicle, loping effortlessly with huge 7-foot-long strides, exhibiting the easy grace of a mountain lion and the steady persistence of a husky. Justin, incredulous, asked his friend to slow down. His buddy tapped on the brakes, and the vehicle decelerated to around 130 km/h (91 mph).

“When we slowed down, the wolf-like creature ran in front of the vehicle. Illumined by the headlights, we saw the whole thing. It was a sight I will never forget. The creature stood around 5 to 6 feet tall on all fours. It had a silverish white body, with huge teeth and a very wide head, and had fairly small ears. It dug into the highway as if it was nothing. I’d estimate the weight to be around four to five hundred pounds. It was outstanding. The beast was bigger than the car itself. The tail on it alone was almost half the size of the car.

“I’m a hunter. I’ve seen wolves, bears, and coyotes regularly throughout my whole life. What I saw that night was not a wolf…” 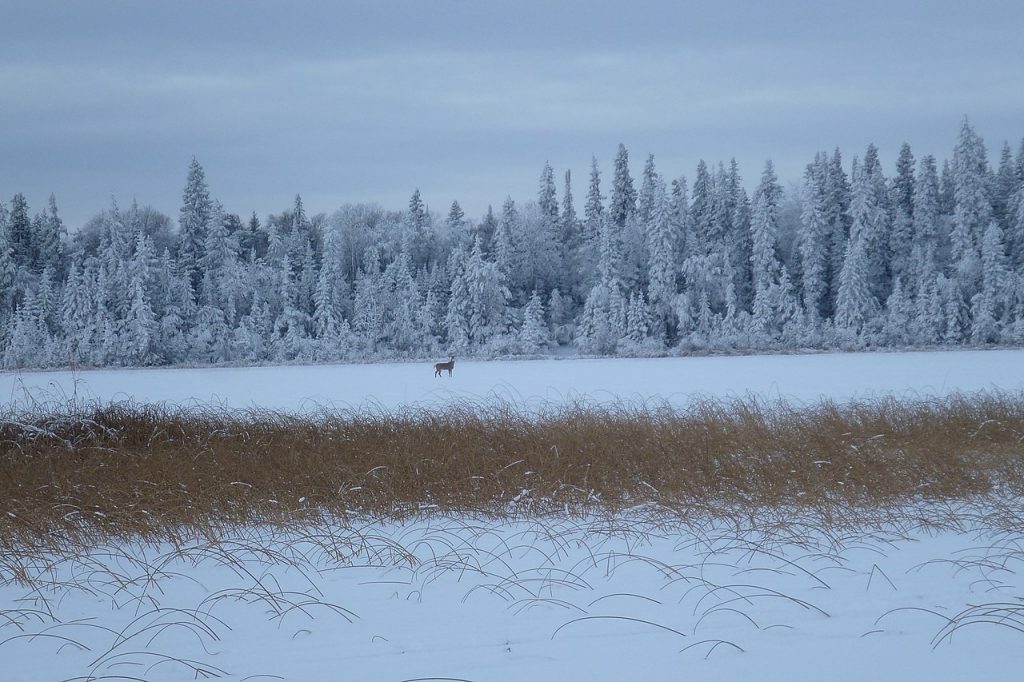 Fearing ridicule, Justin kept the extraordinary experience to himself until 2017, when an older man who struck up a conversation with him at the bar described seeing a similar animal himself many years prior. Instead of loping alongside his vehicle, however, the animal that this man encountered had chased after his truck.

“There is something that lurks out here in these woods,” Justin said, stating that hearing Frank Graves’ Waheela encounter, as presented in our video Interview With a Cryptid Hunter, was what prompted him to come forward with his story. “I still go out in the woods with another of my friends to look for it. It sounds unreal, but I will pass a lie detector test… The creature that I saw was something otherworldly. It feels reassuring to know that I am not alone in this adventure.”

What did Justin Watkins and his friends see on that fateful night in 2011? Could the enormous wolf they witnessed have been a relict Great Plains or Manitoba wolf- a member of the two large subspecies of gray wolf which once haunted the prairies of Central Saskatchewan before their supposed extinction a century ago? Could it have been a freakishly large Mackenzie Valley wolf plagued by gigantism? Was it some sort of prehistoric remnant, like a dire wolf or an Amphicyon, as some believe the Waheela to be? Was it a supernatural entity, a trick of the light, or a figment of the imagination? Or was it a specimen of another species entirely, which has yet to make its appearance in taxonomic literature? Whatever the case, Justin Watkins’ testimony adds a tantalizing new piece to the ever-evolving puzzle of the Waheela- one of the greatest mysteries of Northern Canada.