The following is an excerpt from Indian Tales of the Canadian Prairies (1894), by James Francis Sanderson. 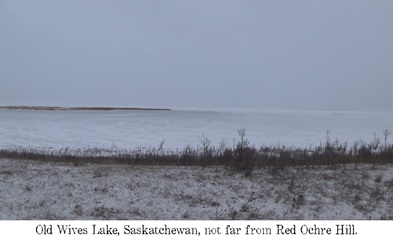 About 26 years ago, as near as I can come to the date in my reckoning, a party of Crees and Saulteaux numbering 900 lodges, were camped at a place 40 miles east of Swift Current and some distance to the northward of Old Wives Lake. It was known as Man-ea-man-an, or Red Ochre Hill. A war party of the allied Bloods, Blackfoot and Peigans got wind of their whereabouts and sent runners to reconnoiter so as to make sure whether they might venture to attack them with a fair prospect of success.

The runners, having been deceived by the nature of the ground, which did not permit of their seeing but a portion of the lodges, returned and reported that the Crees were but a handful and would easily be overcome and killed. The Blackfoot and their allies, numbering between 700 and 800 braves in all, in accordance with their information, advanced confidently to the attack and reached the camp of their enemies just as day was breaking. There, in the brush, they surprised and captured two Saulteaux girls, daughters of a man named Na-im-a-tup, or The Man Who Sits, while they were engaged in cutting wood in the brush. Then began the attack. 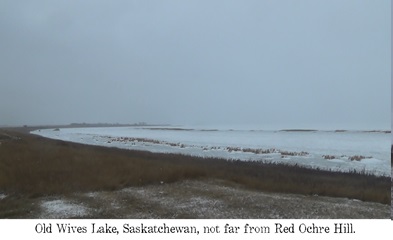 Naturally, the Blackfoot did not find it such an easy matter as they had expected to overcome the Cree warriors and take their hair. In the contrary, after fighting all day, they had to retreat with heavy loss and their enemies finally got them hemmed in in a coulee, where they were shot down by their pursuers from the vantage ground of the sides of the narrow canyon, in great numbers. So thick, indeed, was the pile of corpses that at least one Blackfoot brave is reported to have thrown himself on the ground, as if wounded, and covered himself with the dead bodies, thus evading death or capture until he escaped under the cover of night.

Altogether over 300 Blackfoot fell, the rest escaping with great difficulty from the corpse-filled coulee, while only 15 of the Crees fell. So thorough was the defeat that, to this day, no Blackfoot, Blood, or Peigan will stand any reference to the No-tin-tu-in, or battle of Man-e-a-man-an. The Saulteaux girls who were captured by the Blackfoot were carried away and sold by their captors to one of the young chiefs of the Bloods, for ten head of ponies. He afterwards, in 1872, returned them to their father.

The chiefs of the Blackfoot party were Pu-aps-gu-bachk-a-bachk-wan, or Iron Shield, and Ka-kwis-ki-ka-pu-it, or the Man who Turns his Back. The Crees were led by Ka-nacha-stya-pe-u, or Good Bow; Kus-ko-tchayo-mucka-sis, or Little Black Bear; and Ki-sa-kan-a-tchach-kus, or Day Star.