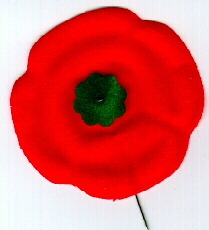 In Flanders Fields was written by Lieutenant Colonel John McCrae, MD (1872-1918).  The poem was inspired by the following story.  During the Second Battle of Ypres a Canadian officer, Lieutenant Alexis Helmer, was killed on May 2nd, 1915 in the gun positions near Ypres. A German artillery shell landed near him.
END_OF_DOCUMENT_TOKEN_TO_BE_REPLACED