Alexander Dunn earned the Victoria Cross as a 21-year-old lieutenant in the Charge of the Light Brigade in the Crimean War. He was born in York, Upper Canada, Sept. 15, 1833.  He was a member of the 11th Prince Albert’s Own Regiment of Light Dragoons (Hussars) in the British Army.

The VC citation read:
During the Charge of the Light Brigade at Balaclava, Lt. Dunn, one of the handsomest men of his day and one of the finest swordsmen and horsemen in the army, won the Victoria Cross.”Having emptied his revolver at the Russians he flung it at them and resorted to his sabre, which he used to good effect. Dunn stood 6-foot-3 and used a sword much longer than the regulations permitted. He saved Sgt. Bentley’s life by cutting down several Russians who were attacking him.

“He then saved another life cutting down another Russian Hussar who was attacking Pte. Levett, 11th Hussars.”

After the war, Dunn helped organize the 100th (Prince of Wales Royal Canadian) Regiment of Foot, a British unit raised in Canada. He later became its commanding officer in Gibraltar.

He died and was buried at Senafe, Abyssinia, on Jan. 25, 1868, when his hunting rifle accidentally discharged.

Special note:  Dunn’s grave went unattended in Senafe (what is now Eritrea) until a group of Canadian UN soldiers from CFB Gagetown spent days uncovering the site and cleaning it up (the site had been used as a garbage dump in the village) in early 2001.  There has been some discussion of exhumation of Dunn and the return of his body to Canada. 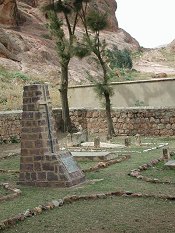 The photo on the right is of the graveyard with Dunn’s cross built into a cairn by the soldiers from Gagetown.