Corporal Colin Barron was born in Baldavie, Scotland, 10 September 1893. Colin arrived in Toronto in March 1910 and work for the railroad. Cpl Barron was awarded the Victoria Cross for raw courage and coolness under fire at Passchendaele, 6 November 1917. The citation reads in part”… His unit held up by three machine-guns, he rushed the enemy and single-handed, killed 4 of the crew and captured the remainder. He the turned one of the captured guns on the retiring enemy, inflicting severe casualties upon them…” Colin Baron again served with The Royal Regiment of Canada during WW II in Iceland and Britain. After the war, CSM Barron was on staff at Toronto Jail. He died 15 August 1958 in Toronto. 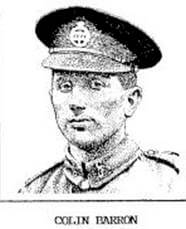